It’s not breaking news that Vancouver has become quite the destination for craft beer. The carbonated (or nitrogenated!) creation has been gaining traction in BC since the early 2000’s, but the craft has seen a true boom over the past five years. At times, it feels as though there is a new brewery opening every week, and there very well may be. As exciting and intoxicating as this trend is, the rapid growth rate occasionally leads to breweries or neighbourhoods not garnering the reputation and respect they’ve rightly earned.

One of the main ways Vancouverites classify their breweries is geographically. East Van is one area and Brewery Creek another, both with a plethora of breweries and craft beer institutions. With so many establishments in such near quarters, craft beer crawls have become an exciting and somewhat memorable way of trying most of the beer certain areas offer.

It seems though, that in Vancouver’s craft beer boom, one area has been overlooked as a home of some of the city’s finest brews. North Vancouver has slowly and quietly fostered some of Vancouver’s finest breweries – something not lost on the brewers located across the Iron Workers Memorial and Lionsgate bridges. “We treat it differently,” said Black Kettle Brewing’s Head Brewer Phil Vandenborre. “We like our community to stand out from brewery to brewery.” So, it seems then, that as most other craft hubs have their crawls, North Van should too. Below is the Capilano Courier’s North Vancouver Craft Beer Crawl. After visiting all the breweries this side of the inlet has to offer and sampling their offerings, this is what we’ve come up with.

It’s 2:25 p.m. on a Friday afternoon and you’ve just finished class for the week. Half of you craves nothing more than to curl up in your bed under the biggest and most comfortable blanket you have, accompanied by the latest season of whichever Netflix show you’re binging at the moment. The other half however, the more adventurous side, is telling you to go get a beer, or 10, with friends and to forget all the stresses that student life brings for the evening. We’ve all been there and it’s a real dilemma. What I’m about to propose, however, may very well be the perfect compromise – a North Vancouver craft beer crawl! Why not stay within the comforts of the North Shore, while having more fun than you probably would have by going through the process of crossing the water to go to whatever overpriced and overhyped place your friends have promised will “be lit” that night. Instead, visit your local breweries, try their beers, meet the people responsible for the liquid delicacies and get home at a decent hour.

For the purposes of this crawl, we will work our way from the breweries closest to Capilano University’s campus to those more centrally located. They are all on main transit lines, and are gloriously close to one another. It’s recommended to get a tasting flight at each brewery so as to try a variety of brews. 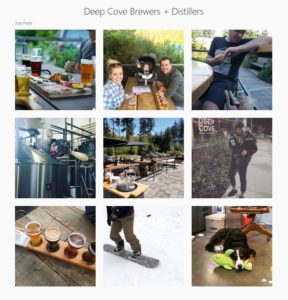 First up will be Deep Cove Brewers and Distillers. Tucked away in Dollarton Highway’s business park, Deep Cove is home to more than just good craft beer, which makes it an ideal start to the crawl. One of the most important things to keep in mind when embarking on a beer crawl is that no matter how impenetrable you may think you are, you’re going to be drinking, probably a lot, so getting some food in your belly will be crucial. Luckily for you, Deep Cove has you covered. They offer a wide variety of food from a caprese salad or their take on poke, to stomach-coating sandwiches perfect for starting this voyage. Deep Cove’s head brewer and production manager, Brett Jamieson, pointed to the mortadella sandwich as his favorite. However, this isn’t a food crawl, so let’s get into the beer – something Deep Cove also happens to be pretty good at making. “We run with the ethos that no matter how esoteric we’re getting with a beer, we always need to bring it back to ‘will people want to drink this?” explained Jamieson. This mindset can be seen across their full line of beers. Whether it’s their black IPA with spruce tips or their chocolate coconut porter, no matter how experimental Deep Cove gets, their beers remain incredibly drinkable. With a variety of core beers, Deep Cove has something for everyone. Jamieson’s favorite is their Method Pale Ale, but according to the man making the beer, no matter what your preference, you’ll find something you like. 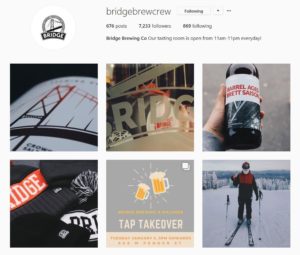 Next up is Bridge Brewing. North Vancouver’s OG brewery, Bridge has now moved into their second location and has become the go-to brewery for many North Vancouverites. Founded way back in 2012, Bridge has built itself into something more than a brewery, it’s become a community. It has a tasting room and a patio, both offering a comfortable atmosphere that encourages socializing. “We have our regulars,” said Head Brewer Sean Kellock, discussing the loyal following the brewery has accumulated. Regulars aside, Bridge is a place you can go assuming you’ll likely run into someone you know. In terms of their beer, few do it better. Their most popular beer is the ever-approachable Bourbon Blood Orange (BBO) wheat ale, but they offer far more than that. At any one time, Bridge will have 10 beers on tap, with six being their core brews – their Pale Ale, BBO, Stout, Sidecut and Hopilano IPA’s and their Kolsch. The other four will be seasonal or experimental brews that always impress. Kellock recommends trying a combination of the two in a flight. “If I’m pouring someone a flight, I’ll do two of our staples like the Bourbon Blood Orange and Sidecut, and then two of our new things on tap,” he said. Additionally, Bridge offers some of the best tacos on this side of the bridges and maybe in the city. 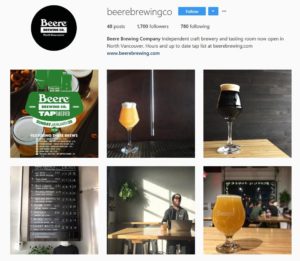 After Bridge, it’ll be time to head over to Lower Lonsdale to visit North Van’s newest brewery. Opening this past year, Beere Brewing Company is still in its infancy. However, their age should not be considered a lack of experience. Head Brewer Matt Beere had been home brewing for 10 years before he decided to open shop. Since then, Beere has quickly developed a reputation of not just offering great beer, but exciting ideas as well. But don’t take my word for it, or Beere’s, North Van’s other brewers have noticed the up and coming establishment as well. “They’re producing beers that are extremely drinkable but also extremely adventurous,” Bridge’s Kellock said of Beere. They have four core beers – their Go Easy Pale Ale, Cold Brew Coffee Stout, Pushing Daylight Saison and a rotating IPA – but what has really set them apart is their constant unleashing of new recipes. “We’ll have a new beer each week,” explained Beere. The brewery’s tasting room is also unique. Upon entering the cozy space, it becomes apparent that it was designed to facilitate discussion, not just consumption. “There are no TV’s because we want people to socialize, we want them to talk,” said Beere. So, when entering Beere, be prepared for good beer, good people and a good time. 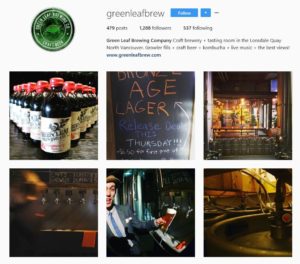 Once you’re done at Beere, Green Leaf Brewing is just a stone’s throw away, located in the Lonsdale Quay Market. Green Leaf is about quality over quantity. They have three core beers in their Pie Hole Pale Ale, Bitter Leaf IPA and Lloyd’s Lager, along with seasonal beers like their Azacca Cadabra ISA and LoLo (short for Lower Lonsdale) Stout. Due to its location, Green Leaf can get very busy at times. It’s right by the SeaBus and has an amazing view of Vancouver’s harbour, so if you can get a seat, you’ll be taking in an amazing view with some equally satisfying beer. Additionally, while they offer cheese and pepperoni sticks, the good folks at Green Leaf encourage their patrons to grab their favorite dish from the Quay’s market and bring it to their tasting room to be paired with the beer.

The last leg of the crawl will take us west of Lonsdale to Marine drive. Due to Black Kettle’s hours, these last two stops are interchangeable depending on the time. They both offer substantial food and uncompromised beer. Assuming you won’t be rushed, Hearthsone Brewing is up first. 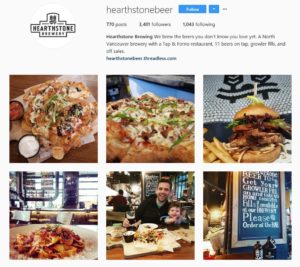 Named after a wood burning fireplace’s hearthstone, the brewery that now occupies Red Truck Brewing’s old space couldn’t have a more perfect name. Upon entering the location’s restaurant, visitors are immediately greeted by a feeling of warmth and snugness – they literally have a wood burning pizza oven. Hearthstone is home to both traditional and experimental beers. Brewery Manager, George Woods can be thanked for this. Growing up in Scotland, Woods brought a new perspective to North Van’s beer scene. He earned his brewing stripes at fabled Scottish brewery BrewDog, then after a season in Whistler decided to stay on Canada’s West Coast. Ever since, Woods has been expressing his passion for beer with a slew of flavorful and drinkable beers. At this point in the crawl it’s probably time to get some more food and Hearthstone’s restaurant will have you covered. All their food is worth a try, but get a pizza, just trust me. In terms of beer, a flight will be needed as Hearthstone has too many different and delicious beers to try. Their Chocolate Milk Stout is a must, as is their Highschool Sweetheart Sour. Aside from those, Hearthstone offers a selection of recipes based in traditional beer styles, but Woods has taken a few and made them his own – like their Wyld Raspberry Sour for example. They also have the Rizzla Rice Lager for those of who don’t get along especially well with gluten. 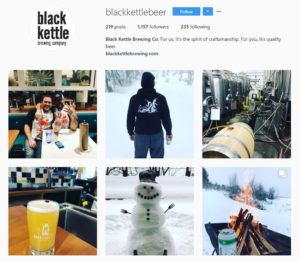 The end of our glorious journey couldn’t be at a more fitting location. Black Kettle’s founders Bryan Lockhart and Phil Vandenborre are some of the most welcoming guys you may ever meet. After homebrewing together for years, the duo made a promise to one another one night, after having a few of their creations, that they would open a brewery. So, they did. “We wanted Black Kettle to feel like an extension of our living room,” Vandenborre explained. And does it ever. Black Kettle’s founders’ attitude towards their brewery can almost be tasted in its brews. No matter which ones you try, the beers are all well balanced and drinkable. They’ll have seven to eight beers on tap at any one time, ranging from lighter offerings like their acclaimed Pale Ale and ISA to the heavier Imperial IPA. When glancing over their beer list, you may notice that Black Kettle also tends to  brew more traditional beers and that’s not by chance. “I like chasing styles that craft beer has forgotten about,” said Vandenborre. Black Kettle also offers food. They have their own food truck based in their parking lot with offerings that pair perfectly with their beers. Once you’re done at Black Kettle the night (or day) is yours, so have fun and enjoy responsibly.

Food: Pepperoni and Cheese Sticks (you’re welcome to bring food in from the Quay Market)

Food: Full menu, but get the pizza

Food: They have a food truck