CapU grad Ben Bilodeau’s move from the spotlight, to backstage

Even before Ben Bilodeau wrapped up his time at Capilano University, as a graduate of the Musical Theatre program, he knew career acting wasn’t what he wanted. Now running his own production company, Ben Bilodeau Productions, he’s shed the actor limelight and instead is pursuing his inner spotlight. 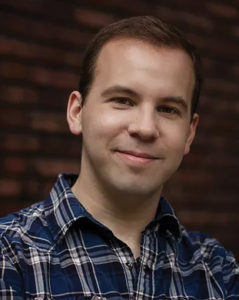 As this is your own, self-titled, passion-filled business endeavour, how do you find it running the production company?

I started the company two years ago. It came from years of me working as an actor in town, but I struggled for years not knowing how to make theater fit in to my life. It was when I put the pieces together that I found what I like about acting is the storytelling, and that I could have more control over what stories I tell by taking the responsibility of producing them myself.

Running my own company has been pure joy. I think the best way to describe it is this: after my first production, after tripping over every aspect of producing and learning as much as I could as fast as I could. I paused and thought, “That  was amazing. I want to do this again, right now!” And I’m very lucky that I have found something in my life that fulfills me, and drives me to become better.

Was there a specific moment that you decided to stray away from the stage’s spotlight and was it at all difficult?

It was a slow burn. From my very first show, I always found myself thinking about what I would do if I was in charge. And I also was having trouble finding roles I was passionate about performing. It took me about four years to figure out I needed to create my own work.

Your productions always seem to have unique aspects to them, that fight against traditional storytelling setup. Where do you find the inspiration for your shows?

I look for a story in a modern setting, because I want to relate to the current state of the world. And secondly, I look for characters driving the story with their choices and personal changes. In the past few years I’ve really had my eyes opened to the need for better representation for women on the screen and stage, so I place a lot of importance on looking for scripts with great roles for women.

You’ve had the chance to work with some talented fellow artists by your side throughout this process. How do you select or find other artists to collaborate with?

I originally was very against auditions. I thought I knew enough people to cast these small shows that I was producing without having to “waste time” seeing groups of strangers. Then for Bachelorette, I was convinced by my co-producer to do auditions. The dozens of amazing actors I met during the process, and the six actors who brought that script to life completely changed my opinion. I think a simple way to put it is this. If you give people a safe, supportive place to show you what they can bring to a project, you will be amazed by what people will bring to the table.

Where do you plan to go with the company?

The concepts are always the same areas. Growing the voice of my company in the arts community, and then growing the voice of the Arts in the city of Vancouver. What that means at this point, is increasing the amount of projects I do and doing more things that create discussion and networking.

Do you still practice acting and would you ever consider going back to it full-force?

Funny you use the word “practice” – I’ve performed on stage once since starting my company. But I now am looking to get back to practicing my acting skills, as they are very rusty. It’s important to me I don’t lose the perspective of what it’s like to be in the actor’s shoes.

Would I ever go back? No. I would like to find a balance where I get to play small characters I’m passionate about, and don’t have to stress about the production side. Maybe once or twice a year. Hopefully it’s for other companies that I want to succeed and it’s another way I can support the community.

To see what Ben Bilodeau Productions is currently working on and to view behind-the-scenes footage, visit Benbilodeauproductions.com.