Under the premise of protecting the safety of everyone involved, the RCMP set up a temporary exclusion zone on the day of arrests, barring anyone who is not part of the enforcement team from entering the checkpoints, including media. The exclusion zone was lifted on Jan. 11, and on the same day the Unist’ot’en camp released a statement that explained how the chiefs’ decision was made to protect the land defenders who “faced an incredible risk of injury or death.”

Despite the agreement, Wet’suwet’en hereditary chiefs are still not consenting to any pipeline construction. Hereditary Chief Na’Moks said in a clip posted by Chantelle Bellrichard of CBC News after the meeting with RCMP, “We are adamantly opposed to this proposed project, and that will never change. But we are here to ensure the safety of our people.”

The pipeline from Coastal Gaslink, a subsidiary of TransCanada, would run 670 kilometres long and transport natural gas from the Dawson Creek area, through Wet’suwet’en traditional land, to a proposed liquified natural gas facility near Kitimat, where it would be exported to global markets.

The Wet’suwet’en First Nations are composed of five clans which include the Unist’ot’en clan and the Gidimt’en clan. The Unist’ot’en camp at the checkpoint has been around since April 2009, and since 2015 has been acting as a healing center for Indigenous families. While the hereditary chiefs of Wet’suwet’en oppose any pipelines on their territories, Wet’suwet’en band council chiefs have signed agreements with Coastal Gaslink. Band council chiefs were established in the Indian Act of 1869, while hereditary chiefs are appointed by a governance system predating any settler contact. The hereditary chiefs claim the elected band council chiefs only have jurisdiction over the Wet’suwet’en reserves, not their entire traditional territories – which include the Unist’ot’en and Gidimt’en checkpoints. Wet’suwet’en hereditary chiefs and land defenders cited a 1997 Supreme Court of Canada decision known as the Delgamuukw Case, which found that provincial governments cannot negate or annul Indigenous land title if the given Indigenous nation has continuously occupied the territory before the declaration of sovereignty in 1867. It also found that the Wet’suwet’en first nations had never surrendered title to their 22,000 km² of land in northern BC. 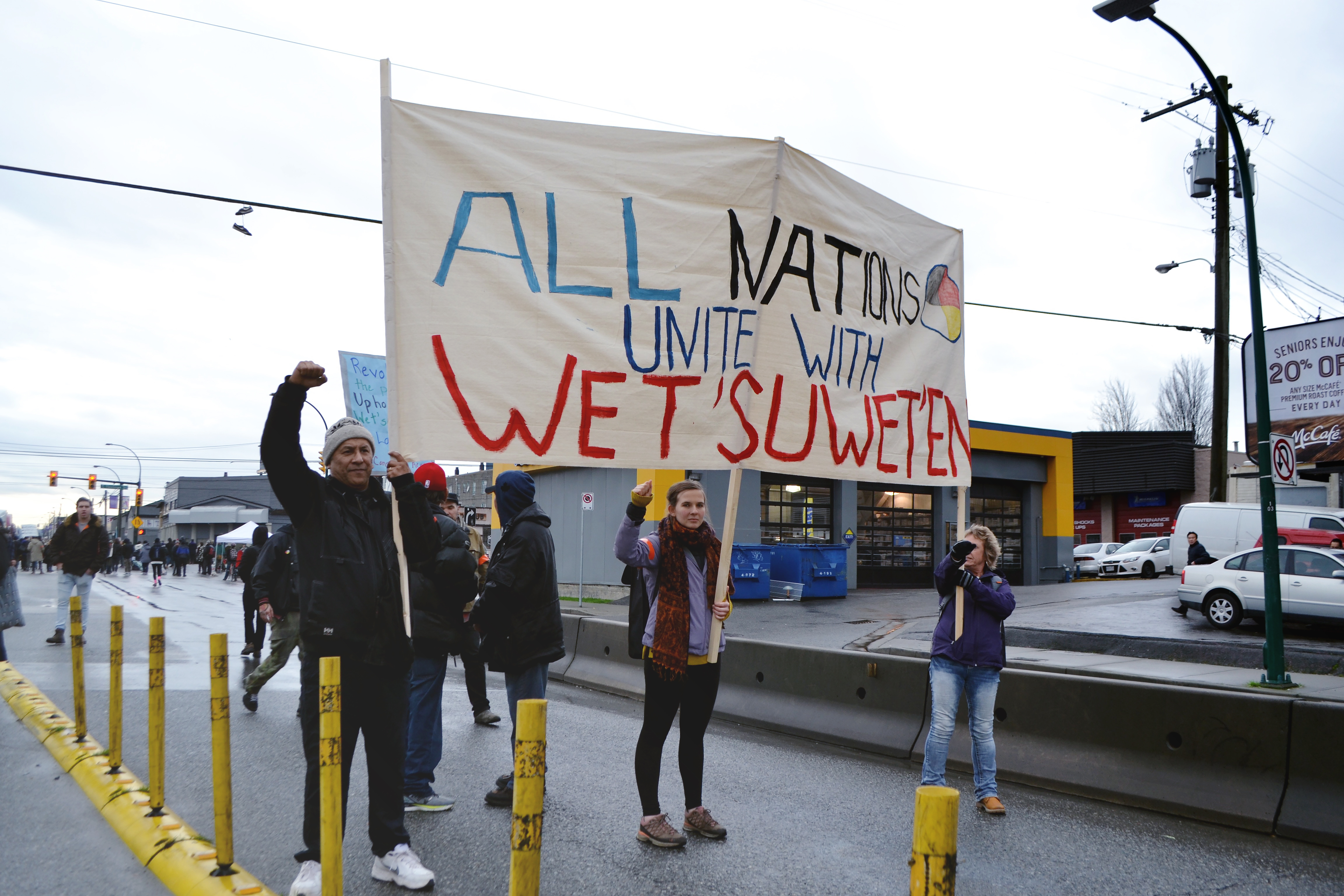 The RCMP confrontation and arrests have been met with resistance across the country. Rallies in support of the arrested land defenders were held in Vancouver, Calgary, Ottawa, Montreal and Toronto, among other cities. The Vancouver rally on Jan. 8 drew hundreds of supporters, including environmentalist David Suzuki and Green Party leader Elizabeth May. On Jan. 9 and 12, people gathered in East Hastings and marched to the intersection of Clark and East Hastings, blocking incoming traffic, most notably the giant trucks coming from the port of Vancouver. Many passing driver’s cars honked and cheered in approval. One diverted driver yelled a slur at nearby demonstrators. Snacks were shared while people sang songs, told stories, and chanted phrases like “no consent, no injunction” and “we stand with Unist’ot’en.”

Dennis Kale is a member of the Gilseyhu (Big Frog) clan of the Wet’suwet’en First Nations and was present at the Vancouver march on Jan. 9. When asked if he had anything to say to the students of Capilano University on this story, Kale said, “You have to remember where you come from, and you have to remember what keeps us alive. Throughout all the ages we have lived without oil or gas. It was only within this last century here where we entered into the Industrial Age, where we have had the false security that fossil fuels is our answer, and the reality is that fossil fuels kill our planet, kill our water,” he said.

Kale continued, “If we look at life, we say that water is life. Life will always find a way – if you kill our water, life won’t find a way.”

A Kamloops town hall meeting with Justin Trudeau on the same day drew both pro and anti-pipeline demonstrators. The meeting was dominated with questions on pipelines and reconciliation towards Indigenous communities. Will George, a member of the Tsleil-Waututh First Nations interrupted another question in progress to confront the Prime Minister.

Earlier that day on CBC’s Daybreak Kamloops radio program, Trudeau was asked if he was “happy with police moving in to remove protesters” by host Shelley Joyce.

“No, obviously it’s not an ideal situation,” he answered, continuing to say that the government has been working on reconciliation and getting local approval for pipeline projects.

“There are a number of people in communities who are supportive, there are a number of folks who disagree with it, and I think it’s important to leave room for people to express their concerns and be heard and be listened to,” he said. “But at the same time, we’re also a country of the rule of law, and if the courts weigh in and say, you know, that we need to get things done and we need to move forward, we also have to abide by that.”

In response, Peter Grant, the legal counsel for the Wet’suwet’en hereditary chiefs, said on CBC News, “I find it a little bit objectionable that the leaders of the country say ‘well the rule of law has to apply’— we agree the rule of law has to apply, but doesn’t that mean that when there’s recognition of the proper title holder, you deal with the proper title holder?” 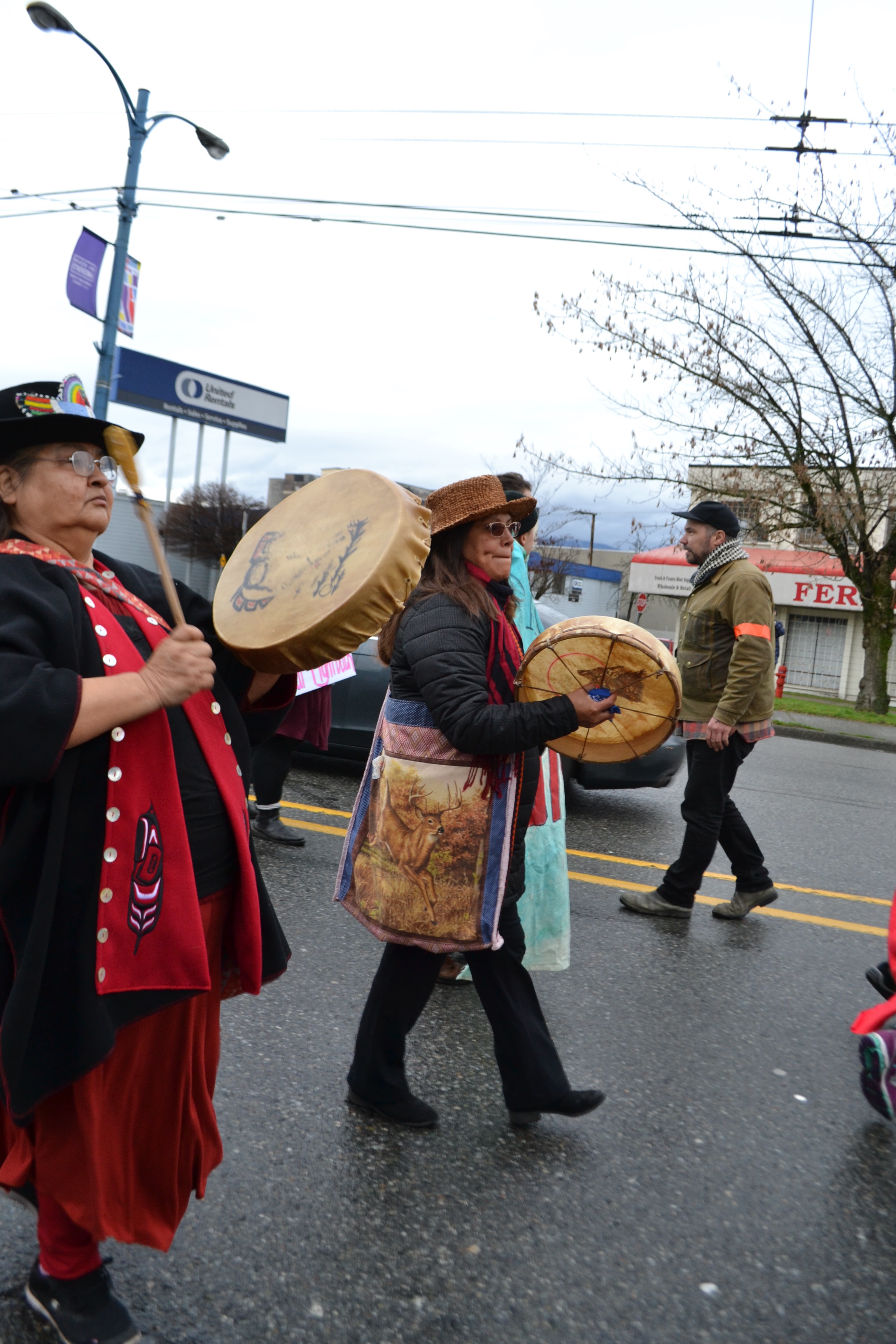 Since the agreement between the RCMP and the Wet’suwet’en hereditary chiefs on Jan. 10, new information is being revealed that is putting the sincerity of the RCMP into question.

Jeffrey Monaghan, a criminologist and professor at Carleton University, uncovered previously classified RCMP documents that demonstrate how RCMP have been monitoring the Unist’ot’en camp since 2011. In a conversation with CBC radio host Brent Brambury, Monaghan explained how the documents reveal RCMP bias. According to Monaghan, RCMP reports characterize Unist’ot’en as “extremists” and frame their ability to gain traction with the public as a threat while typically including “a long narrative around the benefits of various pipelines.”

Coastal Gaslink’s hearing for an interlocutory injunction is to be held no later than May 1, and the Wet’suwet’en defendants are expected to submit a response on Jan. 31. In the meantime, 50 more rallies and counting have been planned in Canada and across the world in cities as far as Brisbane and Boston.