Whether you can’t think of the perfect Halloween outfit, or simply want to avoid looking like everyone else, the Capilano Courier has you covered. Our trend-savvy editors and contributors have put together a list of the hip, hot and hilarious costumes you can expect to see on the streets this Halloween season, and what you need to do to see it through to perfection.

That’s right. The weird, nonsensical meme will be coming to life. Get ready to hear your internet-savvy friend say “Lamp,” for an entire evening as they flit around the party, running into everything, until they finally land on their significant other – the still and stoic fixture in the corner. Sounds super fun, right?

This costume is cool, trendy and on-point. But don’t feel bad if you just don’t get why it’s funny, because it isn’t. The origins of this seemingly senseless sensation are from a picture posted to reddit this summer of a giant moth. From there, the thing grew wings of its own (pun intended).

That being said, this costume is no laughing matter. Moths are fucking terrifying. From flying around like giant idiots and crashing into anything in their way to laying eggs and leaving gross dust webs in everything you love, moths will get all up in your personal space. If you’ve ever had a moth infestation, you know what I’m talking about. No matter what you do, these assholes won’t leave you alone – much like your friends on the evening of your get together.

Pro tip: if you haven’t done this already, put all your dry goods into sealable containers. You’ll thank me later. It won’t help with your weirdo friends who can’t take the hint (“Wow it’s getting so late”), but it will help get rid of the actual insects.

Your least favourite couple is likely to be wearing this one. I guarantee they’ll be the ones who show up two hours late, empty handed, eat and drink way more than everyone else and then destroy your bathroom before leaving at 2 am. You’re not even sure why you’re friends with them, but maybe your friendship is like a moth to a flame – it really doesn’t make any sense. 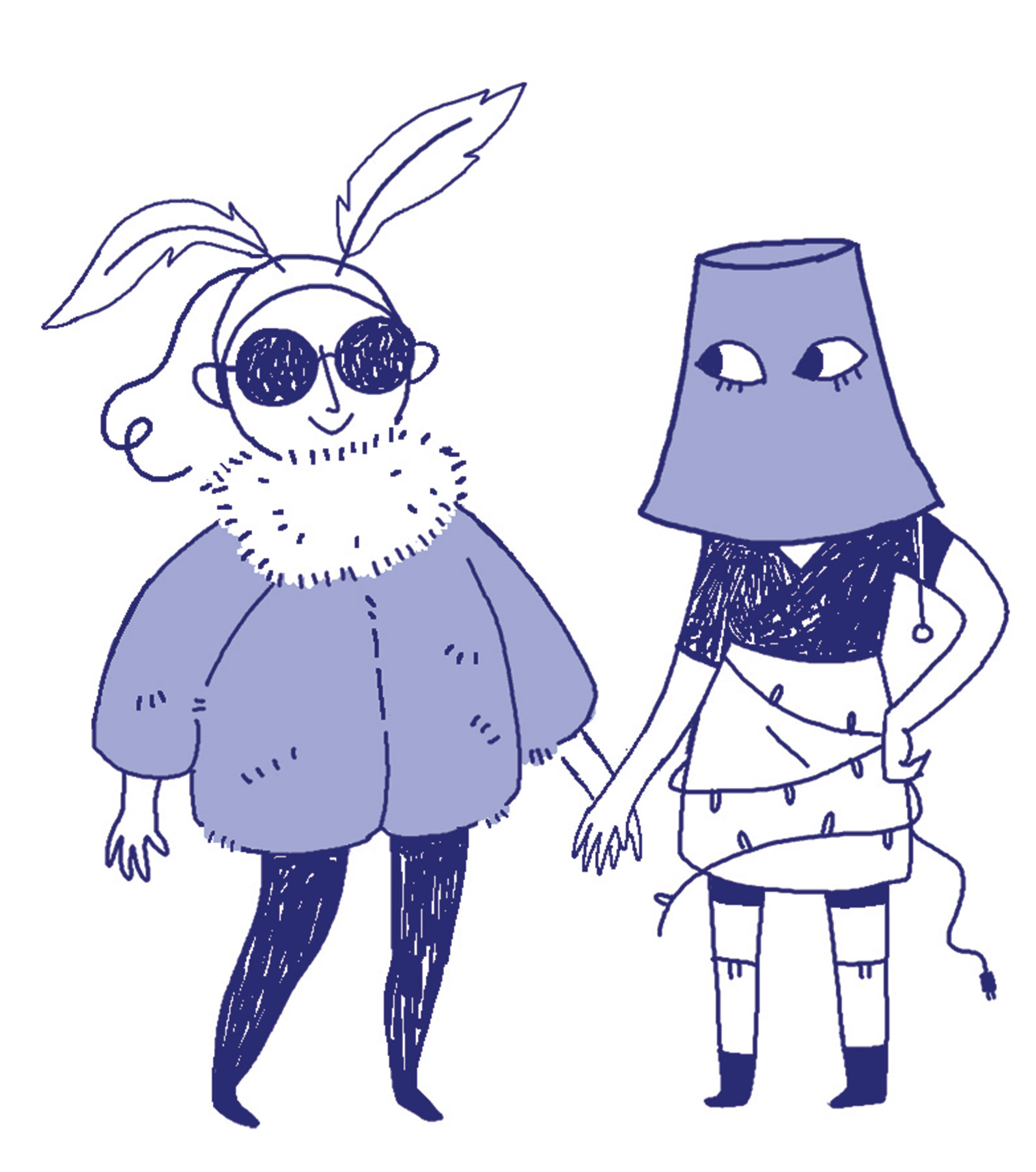 If you habit the main bus routes, it’s likely you’ve seen an intimate close-up of his face. Yes, I am talking about the bloodthirsty symbiote himself – Venom. It’s hard not to notice the alien parasite that came to Earth to take a human host.

Marvel has been incredibly successful with film adaptations of beloved comic book characters, and it’s likely that the recent adaptation will be no exception. Of course, with great blockbuster success comes great Halloween costumes, so it would be totally unsurprising if people decided to dress up as one of Marvel’s spookiest character to hit the big screen.

While it may not be cool to dress up as a comic book character, movies are fair game. From <i>Black Panther<i>, which earned over $1 billion in the box office, <i>Infinity War<i> with its shocking finale had people spilling out of theatres saying “I don’t feel so good,” to the <i>Deadpool<i> duology and <i>Logan<i>, proving that R-rated “superhero” movies can be successful, the comic-con nerds are really sticking it to the man these days.

Of course, you’ll be able to separate the true comic book fans from the movie-goers in the comics, his first host was the one and only Spider Ma (who was then rejected and traded for a better model), but in the new movie, his first host is Eddie Brock.

While perhaps not as charismatic as some of the better looking Marvel characters, Venom is one step ahead on the spooky-scale, as one of Marvel’s most horror movie-esque antagonists, like Freddy Krueger or Jason Voorhees. That being said, there are many characters that could be just as, or more, terrifying than Venom in the Marvel comics (*cough* *cough* Carnage). But since Halloween thrives on easily recognizable costumes, why not go for a character that has finally made it big time with a starring role in his own film and his face on a bus.

Whether Marvel fans have seen the new movie, or just watched the third Spider Man from Sony’s original trilogy, it seems fans will be practicing their best symbiote bonding techniques. For better or worse, Venom is going to find many hosts this Halloween.

Tina Belcher is in all of our futures. The butt-obsessed character from the hit animation series, Bob’s Burgers, has proved time and time again that she’s a force to be reckoned with this Halloween. Busting with hilariously awkward one-liners, it’s no wonder she’s on every costume list.

Though she has a few iconic outfit changes, her day-to-day ensemble is the most recognizable and oft-flaunted on Halloween. The signature Tina Belcher look consists of a lumpy, baby blue short-sleeved t-shirt, an equally lumpy navy blue skirt, white knee-highs, with a red band, black high-tops, clunky black glasses and the incredibly vital yellow barrette.

Despite the simplicity of this costume, there is no way in hell anyone would have that shit just lying around. Maybe, just maybe, you have black converse and remnants of those 3D glasses that everyone seemed to think were cool still lying around. But the very particular shades of blue along with the subtle, but highly important, details such as the red stripe on the socks, the yellow barrette and the blob of black hair formed into a bob with bangs, is way too specific for such a plain looking costume.

This doesn’t seem to stop the show’s fans from rocking their best Belcher impressions.  Oh no, Bob’s Burgers fans aren’t the type of people to call it a day after popping on their Halloween ensembles. Even if you’ve never seen the show, it’s very possible you’ll be able to pick out the Tina Belchers in a room with all of them reciting her most notable lines, including,  “I’m no hero. I put my bra on one boob at a time, just like everyone else,” and “I’ve logged 3,000 fantasy hours into this relationship. You don’t just throw that away.” Not to mention the line from the popular gif, “Your ass is grass and I’m gonna mow it.”

I don’t blame anyone for wanting an excuse to pass off their awkwardness as a character, especially if that character is the iconic Belcher babe. I don’t doubt that I’ll be hearing butt-related one-liners this Oct. 31, and I can’t complain. Tinas will probably be attached to the whole pack of Belchers – heck, maybe the entire clan on Ocean Avenue. While the Tinas of the world will overpopulate the streets this trick-or-treating season, I can’t help but wonder if butt jokes will ever not be funny.

Whether fictional or real, pop culture has delivered some kick-ass ladies worth emulating. From Katniss Everdeen to Mia Wallace, and Tonya Harding to Lady Bird, the options are exciting and diverse. Finally, women’s Halloween costumes have evolved from hyper-sexualized outfits to strong feminist icons. Yet, despite the smorgasboard of costume options, there’s one lady in particular who won’t be overlooked this Halloween season, and that’s the one and only Edna Mode.

She may be a mere supporting character in The Incredibles, but the scientist fashion designer extraordinaire takes the spotlight when she can. What she lacks in height, she makes up for in spunk and a no-bullshit attitude. With the new installment of Incredibles 2, this half-German, half-Japanese dynamo is fresh in our imaginations. Independently wealthy and headstrong, who wouldn’t want to be Edna Mode for Halloween?

Although this costume could be considered easy to put together, I think it would only do Madame Mode justice to finesse the costume to the last detail – with a black bob wig, ending right at the chin with bangs, and large, round black-rimmed glasses will be key to completing this look. Now, for the rest of the costume, you’ve got some options, seeing as Edna appears in a few different dresses. In par with her fashionista side is be the tunic she wears in The Incredibles 2 with multiple layers of fabric in different shades of blue. Or the classic black, long-sleeved dress with a red v-neck from the first movie. Don’t forget to complete the look with some black tights, a cigarette holder and a dash of brazen arrogance. Be bold! Be heroic! But remember, no capes. Voilà, darling.

You’re walking through the hallways of your university in a cap and gown. Beneath the conservative black robe, passersby might just hear the rustle of fabric and the thump and clack of your obnoxious gold go-go boots (which you’ve obviously bedazzled with blue stars and sparkles).

All of a sudden you reach your classroom and BAM – your gown is off, and it’s like that scene in Lord of the Rings where Gandalf the Grey does his big reveal (spoiler: he’s Gandalf the White). Underneath, you’re decked to the nines in your best striped jumpsuit. You’re a young Donna Sheridan and, if you’re lucky, your two Dynamos, Rosie and Tanya, are right behind you.

Since CapU is a school bursting with music, theatre, and musical theatre talent, it’s pretty much a guarantee that this introductory scene from Mamma Mia: Here We Go Again is going to be played out at least once this Halloween season. Instructors, prepare yourselves to be whirled around while students inappropriately sing that scandalous song from the opening act. You know the one. Or, you should. Don’t flatter yourself though, you are just a prop.

This will not be an easy costume to pull off, but it’ll be well worth the effort. Believe me, not only will you be wearing a jumpsuit, which is a bonus in itself, but you’ll have free license to sing every ABBA song you’ve ever loved. Plus, it’s totally okay if you want to douse yourself in glitter. Just do it.