Rules of the Road

Uber drives forces of change, for better or worse

In recent years, ride-hailing or ride-sourcing services such as Uber, Lyft and Sidecar have exploded in popularity around the world. Well known and well loved for offering a unique combination of convenience and affordability, without the hassle of investment on the part of the drivers, these services have become a hot topic of conversation between regulators, taxi drivers and consumers. Uber is the fastest growing ride-sourcing service, and is active in 662 cities. As the last big city in North America to welcome ride-sourcing, Vancouver is under pressure from the public to get with the times.

While the BC government has finally relented to the idea of these ride-sourcing services, the debate around what regulations will be imposed continues. Currently, the Select Standing Committee on Crown Corporations is under pressure to release a report underlining the conditions of these services by Feb. 15, 2018. The government’s commitment is to have ride-sourcing in place by the end of the year, but there is some concern that these regulations will have a negative effect on some of the more attractive aspects of ride-sourcing, such as price.

Not to be mistaken with ride-sharing, which is defined legally as not-for-profit carpooling, ride-sourcing is set apart from taxis by connecting private vehicles with travelers through the convenience of a smartphone app.

“I know a lot of consumers are very grateful for the Uber and Lyft style app, but there’s nothing actually preventing a taxi company from having the same thing,” said North Vancouver- Lonsdale MLA, Bowinn Ma. “In BC, we don’t regulate that technology, we don’t regulate apps. So for example in Richmond it was revealed that half a dozen Transport Network Companies (TNCs) already operate. The app is not illegal – they’re free to operate,” she explained. “What is currently illegal is driving passengers around for money in personal vehicles without the proper insurance.”

But according to Uber’s public policy manager, Michael van Hemmen, the issue of insurance is less complicated than politicians are making it seem. “Uber would purchase insurance from ICBC that would cover every trip from when the driver accepts a trip request to when they drop off the last passenger,” said van Hemmen in a meeting held in Vancouver on Jan. 8.

Essentially, what the regulators are trying to determine through conferences held this month is how to allow personal vehicles to provide commercial services while maintaining driver and consumer safety, a level playing field for taxi companies and a high level of labour standards; a tall order to fill.

There is no doubt that taxi companies have a right to be concerned. Around the world, the industry has taken a hit as Uber and competing services have become the transportation of choice for many commuters. In 2016, Yellow Cab in San Francisco filed for bankruptcy protection, and other companies appear to be facing similar prospects. Uber’s “predatory” pricing scheme means they continue to operate at a loss in order to drive out competition, so they can achieve a dominant position in the global market, and eventually drive up their prices.

Of course, as a highly regulated service, taxis are at a disadvantage. In order to ensure a high level of safety, the government regulates criminal record checks, driver training, rates, and insurance, which result in high overhead costs for taxi companies.

“The government has imposed all of these regulations on ride-hailing already on taxi companies,” explained Ma. “So it would not be fair to that industry that has worked within these rules for us to create a whole new set of rules that ignored all of the reasons why we implemented those rules in the first place.”

In a recent report by Global News, Carolyn Bauer, president of the BC Taxi Association addressed that taxis are not currently meeting the needs of the public, but proposed that the use of an app like Kater might be a viable option. Kater is an existing app which would dispatch the nearest vehicle, be it a taxi, Uber, or another ride-hailing or ride-sourcing service. However, Global News also reported that Green Party leader, Andrew Weaver, is worried that this would limit the competition in the industry and could mean that ride-hailing services have no incentive to improve.

In consultations, taxi drivers and owners have said that they would simply like to be given the same advantages that Uber drivers are given, but this too introduces a bit of a dilemma. Either the licensing and insurance standards for Uber will have to be raised, or taxi standards will have to be lowered. Users, however, benefit from having both economical and regulated options available, so by creating a “level playing field,” there is a concern that we are compromising the desirable aspects of both amenities.

If the government imposes more arduous licensing requirements on services like Uber, it would potentially cut down on the number of casual or part-time drivers who are attracted to working for these services. Additional regulations could also drive up the price, which may not be welcomed by consumers. Many people who use Uber are aware that by doing so, they are taking a small risk, but often deem it to be worth it for the cost and convenience. However, both the rating system and the ability to see the driver through the app helps to give them a sense of control. “I’ve been in a few not so great Ubers, but I was able to offer feedback, to which Uber responded to,” said Katie Welsh, an Uber user in Guelph, Ontario. “With a taxi company I feel like it’s much harder to do that, and I wouldn’t expect any response.”

However, not all Uber customers felt their concerns were addressed, and issues with security have some users troubled. Shaelyn McNamara, a flight attendant for Air Georgian, has been a frequent user of Uber in the past due to her ever-changing and unpredictable work schedule. “I have had multiple issues with Uber, with no options to ask for help beyond the limited options available on the app,” McNamara said. “When my account was hacked in Orlando, and an unknown person was ordering rides with my credit card information, I was unable to contact Uber for support. The company has no phone number to call and speak to a live representative unless you are an Uber driver, or if you find one of the few Uber-hubs to visit in person.” McNamara said that the customer service she experienced through Uber made her feel unsafe trusting her credit card information with them, especially a company with a track record of dishonesty. 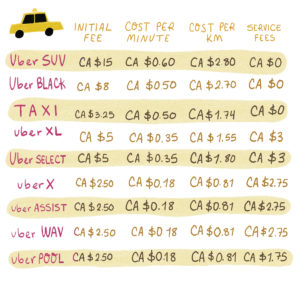 Former CEO Travis Kalanik’s cover-up of the 2014 and 2016 cyber attacks, which left 57 million users vulnerable to having their personal data stolen, were just two instances among several that have left users feeling insecure. Overall, McNamara said she felt unvalued as a customer, and was unlikely to use Uber again if other options were available. While customers do use the service at their own risk, the company appears to be more focused on their own rapid success than on the needs of their customer base.

Ma stressed that she did not want to focus on Uber as a business, and that the regulatory regimes would not be created in the interest of certain companies. “These regimes are created for certain trends in the marketplace or new services,” she said. “But we don’t want to create a regulatory regime that is created to benefit a specific company.”

While certain issues may have simple solutions, there are aspects that require more thought. In addition to worries surrounding industry standards, public safety and a level playing field for taxi companies, the other unanswered question is whether we actually want more cars on the road, since many commuters who would normally bus readily admit that they are inclined to use Uber several times a week because it is a more convenient option. According to an article published in Craine’s Magazine based out of New York, the lack of regulation around Uber has led to increased congestion on the city’s roads, equating to longer hours and lower incomes for all drivers.

There are also some environmental concerns – according to the BC Passenger Transport Board’s Eco- Friendly Taxi policy, all conventional taxis are required to be eco-friendly vehicles in urban areas of the province. This would be hard to police with private vehicles and there are already huge issues with congestion in Vancouver, not to mention existing concerns about reducing emissions in BC.

Overall, the issues brought forward by the recent conversations surrounding ride-sourcing have shown that the public would like more affordable and convenient transport options. Currently, the needs of the public are not being met, especially as traffic on the road increases, but the implementation of Uber may not bring the relief that is so fervently hoped for. What we do know however, is that the area in which people tend to be the most concerned is price, and that they want their service to be easy and efficient. Most of all, we know that people are desperate for an immediate solution.

In 2016, the Tyee reported that the Community, Sport and Cultural Development Minister, Peter Fassbender, said the government was intent on taking “a long-term view on the issue.” Vancouver may be one of the last big cities to hop on the bandwagon, but they also have a lot more information to consider, and can hopefully learn from some of the issues ride-sourcing has caused in other big cities around the world. While it’s certain that the public just wants the government to make a decision, their hesitation is warranted.

As is life, the desire to please everyone has nobody thrilled.