The good, the bad and the grey areas of Instagram fame – exploring what it means to be an influencer

“It helps if you’re hot – to get any sort of traction, the kind that companies care about, hotness matters.”

This comes from Ashley Carrera*, a manager of brand partnerships at a large marketing firm, which specializes in managing the careers of social media influencers. Carrera, who has asked to remain anonymous due to the public nature of her work and her unabashed commentary on the world in which she makes her living, is not alone in making this observation.

Since its nascent days almost seven years ago, Instagram has been making stars out of people previously undiscovered. In part, there is truth to Carrera’s statement. There is a certain aesthetic appeal that garners the mass followings that lead to brand sponsorship and company endorsements. However, this is just one of the sides to the story, one that focuses on vanity. Instagram has provided a home to people from all walks of life – offering everything from small niche account genres, to the daily lives of the ultra famous, and within this range also lies a place for accounts spreading positivity.

This was proved by Brianna Neely, the retired fitspo (fitness inspiration) account runner who made headlines when she switched lanes and brought her over 20,000 followers along for a journey of self-love and body positivity. Over the course of her Instagram career, Neely shared her vulnerabilities, going through phases of no-carb diets, thigh gaps and bikini competitions.

Eventually, she found herself landing in the balanced diet and body positivity category, where she saw just how positive a community Instagram could foster. “[People] who, just like me, had experienced one or all of these different phases, connected with me through the app and we found solace together,” she said.

Instagram is also often used by photographers promoting their work and passion for the captured image. Whitman McLallen does this through nature photography. Gaining a solid following for himself in doing something he loves, although he, too, took some time to discover exactly where it was he wanted to fit himself into the Instagram world. “I used to cater my Instagram to other people… I just kind of realized… there’s no point in catering to other people if I’m not enjoying it myself.”

Though McLallen may have figured out early that he would prefer to gain followers in a more authentic way, he says he’s witnessed the fallacies that can go on as people seek to increase their follower counts. McLallen described apps he had tested out in the past, apps he continues to see used by his online peers today. These apps utilize bots that seek out certain hashtags, follow and unfollow and leave comments in blasts, increasing account traffic. These bots can get users’ following counts up into the tens of thousands. 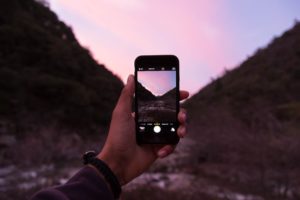 McLallen said that while this holds obvious temptation for users trying to attract more people or the attention of sponsors, it’s the quality that comes out on top in the end. Posting quality content and engaging with other users by way of comments, likes and shares is the only way to gain a good following. Otherwise, you may be left with thousands of empty followers who don’t engage at all.

There are, however, other methods people on Instagram use to attract more attention, ways that can lead to more wholesome followings. Neely points to alliances with bigger pages as one of her greatest sources of new followers. Reposts and shout-outs would initially form relationships with similarly themed accounts, and direct their followers to her own – putting in that extra effort to network often led to big payoffs.

Simply doing some research into how the medium works is another alternative for organic growth. McLallen admits that he strategically posts at times he knows there will be a lot of people online who will be receptive to what he uploads. Posting schedules are extremely common among Instagram users. These schedules are mapped out to pinpoint the most active times on the app, intersecting available eyes with your hashtags before they get pushed back by more recent ones is key.

Though it may seem like a lot of work – and it certainly can be – there are huge financial gains available to prospering Instagram account runners. During Neely’s run with Instagram popularity, she worked with several health-food and fitness wear companies who would send her free products in exchange for placements and mentions in her content.

By Carrera’s definition, a social media influencer is someone who holds influence in the online world willing to use their platform to sell and push trends forward, opening a whole new dimension to the possibilities of advertising. As Carrera explained, the potential of using Instagram for advertising is a major win for ad agencies because it’s “cheap, abundant and direct.”

The app shatters the traditional model of advertising in which getting a product endorsed by an influential person means high demands in terms of resources. With the old model, not only would you be required to pay the influencer for their endorsement, you would also need to hire a photography crew and a third party to distribute the images. Through Instagram, anyone with enough traction could become a distribution model.

“Your dollar goes a lot further on Instagram,” said Carrera. “For even a couple grand you can get a successful influencer to seamlessly incorporate your product into their posts.”

It’s nearly impossible to determine exactly how much profit is made off sponsored posts – the number is determined by several variables such as the reach of the influencer, the use of the product, and the size of the company. A quick Google search will tell you that an influencer with a following in the six-figure region profits on a sliding scale from thousands, to tens of thousands of dollars for a single advertisement.

While, clearly, it’s not a secret that social media influencers frequently work with companies in promoting their products and services, there is somewhat of a grey area in the ethics involved. As Carrera pointed out, “half the time the public barely even registers this sort of content as advertising, they view it as someone they admire making a recommendation.”

This blurred line seems to go hand in hand with a platform in which many users thrive off skewed perspectives and false representations of what their daily life actually entails.

For Neely, the entire idea of an influencer is rather complex. There is one way to look at the phenomenon, a positive way, where people can – and do – use their platform to encourage positive social and global change, or share resources with and for people who may be going through a time of struggle. Then, on the negative side, there are fake realities made up exclusively of the highlights.

Constant displays of idealized lives without any context of work, that broadcast the idea of how one should be living, how to be happy and successful without any effort. “I think these accounts can send the wrong message to impressionable youth,” said Neely. “I stress – social media is not real life.”

Even from the side of the creator, there is the concern of disconnect. For Neely, this became especially prominent before she gravitated to the self-love category and realized that despite the intent to create an account on healthy living, she herself was doing anything but. “The more popular my account became, the more dissociated I became with reality. Social media definitely skewed my perspective on what a ‘fit lifestyle’ looks like – I heed others to think critically before mimicking their favourite fitspo’s diet and training guide.” 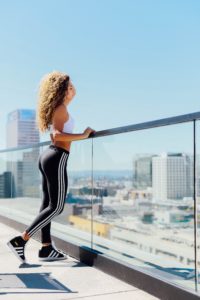 To Carrera, it’s just business. As she explains, Instagram is shallow, but advertising always has been. The goal is to grab viewers’ attention, and hold on to it so they will remember what it is that they’re being sold. And Instagram happens to serve as an ideal venue for this. “I don’t feel too bad about the moral grey areas which I wade in. I’m facilitating business opportunities to strong-willed independent entrepreneurs. No one is forcing anyone to be on Instagram- if it’s negatively impacting your life – leave it be”.

When things began to feel disingenuous, that’s exactly what Neely did. Before she deactivated her popular account, she noticed her posts no longer resonated with her and found that she longed for a life that felt good, it wasn’t enough to simply look good.

Since stepping away, feeling alleviated from the “pressures of fitting inside the square box,” Neely said her days have become more productive and she’s happy with what she was able to accomplish with her account. While she described her relationship with Instagram now as sometimes contemptuous, overall, she is grateful for the experience. Having met some of her closest friends through her time on Instagram, she confidently looks back free of regret.

Instagram can be a place of community, bolstering great friendships and valuable business connections. It can be a place to spread the best of one’s personal experiences, explore and share passions and even get sponsorships or serious monetary compensation. But it can also be a source of social pressures unparalleled by some of the more traditional workplaces. It’s a place that can grant influential power to people who may not wield it as responsibly as they should.

Regardless of use, the social media giants’ impact on advertising and the culture of celebrity has been immense, changing the traditional paths to popularity from an exclusive club, to a surprisingly attainable venture. That is, of course, if you’re prepared to work.