On Sept. 7, Awkward Stage Productions launched the 2017 Vancouver International Fringe Festival with their production of Cry-Baby: The Musical. The show, based on John Waters’ 1990 film, was directed by Vancouver’s own Barbara Tomasic.

The comedic musical follows Baltimore teenager Allison Vernon-Williams, as she finds herself head-over-heels for orphaned bad boy “Cry-Baby” Walker, leader of a group of rebel outcasts. The 1950s style production portrays an unorthodox Romeo and Juliet storyline, displaying conflict between the conservative squares and the rebel outcasts – complete with comic relief.

Awkward Stage Productions, returned to the festival for their eighth time after claiming the winning company title of The Pick of the Fringe. Their high standard for quality, inclusive and relevant theatre programming, aims to provide young and emerging artists with opportunities in both performance and production.

Under the musical direction of Andy Toth, and choreography of Capilano University 2011 graduate, Erika Babins, the diverse cast of emerging artists shone brightly, Other performing CapU alumni include: Victor Hunter as Wade “Cry-Baby” Walker (Grad of 2010), Katrina Teitz as Allison Vernon-Wiliams (Grad of 2017), Synthia Yusuf as Lenora Frigid (Grad of 2013) and Ali Watson as Dupree W. Dupree (Grad of 2016). 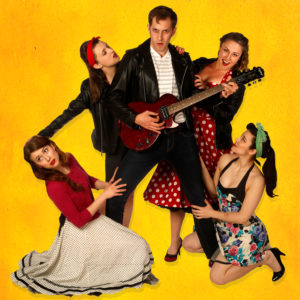 Throughout the production, the continuous friction between the two social circles developed to form sparks, successfully setting up explosive one-liners. The narrative structure built by Thomas Meehan and Mark O’Donnell complemented the original plotline with tasteful comedy throughout. Though the plotline could be taken as another forbidden love tale, unique musical numbers by Adam Schlesinger and David Javerbaum dotted the production to deliver an unparalleled experience.

From the clean-cut Keds that graced the feet of the squares, to the leather faced jackets and bold patterns of the rebels, each costume was thought out perfectly, while hair and makeup remained tailored to the time-period.

Quick and efficient set changes made for seamless transitions as performers remained in character, bringing radiant life to the scenes. While the set held a simplistic approach, it provided room for the audience to toy with their imaginations to piece together each scene with the help of clever blocking.

The Firehall Arts Centre provided an intimate and warm setting while the lighting team glowed up the evening atmosphere. The micless night had the cast delivering a memorable animated performance, and with the occasional sexual innuendos and coarse language, this 14+ friendly show is a definite crowd pleaser perfectly paired with a dinner or a rum and coke.

Cry Baby is playing at the Firehall Arts Centre, until Sept.17, for $14 a pop. For show dates, times and tickets visit tickets.vancouverfringe.com, and to read more about upcoming shows put on by Awkward Stage Productions visit awkwardstageproductions.com.