Immigrating may not be easy, but for most it’s worth it

Ambleside Park is usually used for sports, lounging at the beach and a multitude of other activities throughout the year. However, there is one night at the end of every winter season where it is ignited and becomes a gathering place for one of the North Shore’s largest populations. There are no soccer balls to be seen, or beach towels on the ground; instead there are numerous fire pits set ablaze, to be jumped over by those celebrating Nowruz, also known as Persian New Year. While Nowruz is not a traditional Canadian celebration, it has been embraced and celebrated at Ambleside Park for over 20 years.

According to Capilano University Sociology professor Laurel Whitney, Canadians’ tendency to embrace other cultures should come as no surprise. “Canada has always been a country of immigrants,” she said. “We take it for granted.

Shohreh Abedi, who first brought her family to Canada in 1996, offered a testament to the draw Canada has worldwide. Originally from Iran, Abedi moved to Dubai with her husband Mo in 1987 in search of new opportunities. However, after several years and the addition of son Babak and daughter Matty to the family, Abedi and her husband made the decision to yet again move, this time to Canada. “At that time we were living in Dubai, but we were thinking about our kids’ future,” she said.

Speaking to Abedi the morning after the official celebration of Nowruz was a special experience. Sitting in her living room, there was an energy in the house. She and her family had been out late into the early morning celebrating with friends and family, and had spent the majority of the day on the phone exchanging Happy New Years wishes with many in Vancouver and Iran. In between calls, she was able to look back at the journey that brought her family to Canada. “Matty was only three years old and Babak was only six years old [when we came]. We knew that when they grew up they’d need a good education,” she said.

According to Whitney, education is one of the main motivations for individuals or families to come to Canada. “Factually speaking,” she said, “we have one of the best public education systems in the world. Our K-12 system is in the top five in the world, and they know that.”

For Abedi, and many other parents who make the move to Canada in search of a better life for their children, the decision is not without sacrifice. Abedi and her husband had spent years developing a photography business in Dubai, and were seeing success with it. “We had really good jobs in Dubai,” she said. “We earned really good money, but we came to Canada for the education, we knew that in Dubai they [wouldn’t] have a good education.”

Whitney recalled a Syrian refugee she worked with this past year who had a similar story of sacrifice. “Last year at this time I taught in a Link program, which is a program for new Canadians and refugees,” she said. “I had a man in my class whose English was very good, and he was the head of the paediatrics ward in the main hospital in Syria, but here he was working making doors in a factory in Abbotsford. He never expressed any resentment or bitterness about it.”

Curious about how he could cope with the transition from such a prestigious position in Syria, she asked the man how he was feeling. His response: “’Well, my son is 18 and he’s making a decision right now about which university he is going to attend in Vancouver,’ and he said ‘I feel my sacrifice is worth it because my son is going to have a better future here than if we stayed in Syria’,” she recounted.

Unfortunately, immigration has been a target for many people, gaining more prevalence as of late, at all levels of society. While it’s hard to miss President Trump’s weekly verbal excrements, the negative tone taken towards immigration has been making its way down the grapevine, being embraced by larger and larger groups of people.

Discussing this trend, Whitney made an alarming comparison. “I think really we should go back to Germany in the 1920s,” she said. “Immigrants are easy scapegoats, especially if you have one group that is very visible.”

Whitney made this connection while discussing the racist undertones that have taken over the narrative connected to British Columbia’s sky-high housing prices over the past few years, something CapU student Daphne Chiu knows all about.

Originally from Malaysia, Chiu came to Canada in 2010 in search of a better education than the one she would have received at home. “I wanted to get an education outside of my country because the education there basically sucks,” she said. “My initial plan was to go to the UK, but my dad wanted me here because my aunty is here.” Chiu originally attended Simon Fraser University (SFU), but later transferred to CapU.

While the majority of Chiu’s experiences in Canada have been positive, she has also had her share of negative interactions as well. She remembers one encounter in particular.

“I was downtown,” she recalled. “There was this woman behind me who was like, ‘Fucking Chinese,’ so I turned around and said ‘I’m not Chinese, I’m Malaysian, why do you hate Chinese so much?’ Then she was like ‘They make everything so expensive here,'” targeting her frustration towards Chiu. 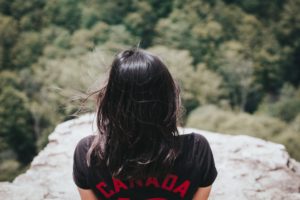 Additionally, most British Columbians and Vancouverites in particular should remember that their families have most likely only lived here for a few generations. “BC has the most transient population in Canada,” Whitney said. “I know the word transient also has a colloquial meaning, but transient in a demographic sense would mean that very few people have roots in this province, we’re all newcomers. The First Nations would be the exception,” she clarified.

Abedi also identified racism as one of the drawbacks to being an immigrant in Canada. While she hesitated to give any specific examples, she acknowledged that it’s something many immigrants have to go through on a daily basis, often while performing routine tasks. “You can see it when they talk,” she said. “For example, cashiers at the supermarket, they talk to white people one way, but when they talk to us they know we came from another country, and speak to us differently,” she said.

While racism is an everyday challenge for many immigrants, arriving in Canada is perhaps an even larger struggle. According to Jane Howard of the North Shore’s Harvest Project, getting grounded in a new city and a new community can be one of the biggest challenges immigrants face. “Often they are isolated,” she said. “They don’t have any community to support them, to tell them where to go and what to do. Also, there’s a language barrier.”

The Harvest Project’s motto is “extending a hand up, not a hand out,” focusing on the residents of Vancouver’s North Shore. Howard explained that while every individual or family the Project helps is different, there are reoccurring issues. “Often they’ve got PTSD,” she said, “so we help find them counselling services.” However, some of the biggest challenges facing those new to the country that Howard and the team at the Harvest Project help are related to day-to-day happenings.

“We try to get them connected to supports they might need,” she said. “It might be in the legal system, health care, we help them write a resumé so they can find employment, we have a money manager here who will help them with their budget,” she explained. Howard also emphasized the importance of English as a Second Language (ESL) classes for many immigrants. Overall, she stressed the fact that immigrating is, “Very stressful for families, our culture is so different, they’re trying to integrate into something they don’t really understand.”

As much as Howard’s job often sees her dealing with immigrant families or individuals in need of aid, it also allows her to see the possibilities immigrating to Canada offers. “We have single mothers come with five children, with English as a second language,” she said. “They’ve done their master’s degrees.”

Chiu will graduate from CapU this summer with a degree in Communication studies, but won’t soon forget her time spent at the school. “There’s more local students here that I can Interact with and learn more about Canadian culture, which is kind of opposite of my previous experience from SFU,” she said. She hopes to find a public relations job in Vancouver, and while she does feel some pressure to return home and help her father with his business, she sees her future in Canada.

Abedi’s daughter will also be graduating this summer with a criminology degree from SFU and the intent to attend law school in the future. Her son graduated from the Vancouver Film School this past December and is pursuing a career in video game design.

While Canada is still a relatively young country, its history is rich with contributions from immigrant communities – something that is important to remember when addressing the topic of immigration. It is also a country that has long referred to itself as a “cultural mosaic”, which most Canadians take pride in. But perhaps, no one appreciates Canada and the opportunities it offers more than its immigrants, as they realize how lucky anyone is to call it their home.