Events held by the University and the CSU draw attention to representation, identity and women’s issues

Capilano University and the Capilano Students’ Union (CSU) celebrated International Women’s Day on March 8 this year with several on-campus events. The day included film viewings and panel discussions sponsored by the Women & Gender Studies Department, in partnership with DOXA Documentary Film Festival and the Federation of Post-Secondary Educators of BC (FPSE).

Prior to Friday’s events, the CSU and the Women Students Collective hosted a screening of Clueless in the Members Centre on Wednesday, Mar. 6. The next day, a keynote speech was delivered by Executive Director of the Canadian Alliance of Student Associations (CASA) and member of the Federal-Provincial-Territorial Roundtable for the Status of Women, Manjeet Birk.

Birk’s talk, titled “Intersectionality in Education”, was much anticipated by members of the CapU community. “I think women aren’t acknowledged for their successes as much as they should be,” said Women Students Liaison Makenzie Thorpe. “It’s important to bring role models such as Manjeet and Indigenous Elders into our community… and acknowledge how much history women have put in that hasn’t been appreciated enough.”

The same sentiments rang true for CSU President and Vice-President Equity & Sustainability Anna-Elaine Rempel. “It’s a personal interest of mine… I really, deeply care about women’s issues, and especially taking the leadership role that I have with ‘Let’s Get Consensual’, it’s really lit a fire under me to be an advocate for women and to provide a space for us to actually talk about these issues,” she said. “I think it’s really important to uplift and elevate the voices of women, especially who come from a greater intersectional background as well.”

Rempel is no stranger to advocating for women and is clearly passionate about her work with the CSU on and off campus. “We do a fair amount of work, especially under my portfolio, against gender-based violence with the ‘Let’s Get Consensual’ campaign. We’ve seen a lot of growth within the campaign over this last year that I’m really proud of, that we’ve been able to develop with a lot of help from the University and Jody Armstrong,” she said.

Last summer, Rempel fired back at North Shore News columnist Trevor Lautens following the publication of an opinions piece titled “West Van councillors Cassidy and Booth in two-woman mayoral race”. “He put out his thoughts on the race, pinning the two women against each other… Of course, they’re both vying for the same position. But there was a lot of very gendered language,” she said. The article was originally brought to Rempel’s attention when she saw a tweet addressing the article posted by MLA for North Vancouver-Lonsdale Bowinn Ma. “My position on it was that the opinion piece itself was perpetuating misogynistic views about women in positions of power and women in politics. It’s entirely unnecessary to write about women in politics differently than men,” said Rempel.

One description stood out in particular. In his column, Lautens had referred to then-mayoral candidate Christine Cassidy as a “Dresden china doll” with “delicate porcelain skin”.

“I think it’s really frustrating with where we’re at in terms of the way that feminism and gender-based issues are viewed in the media and in our larger society, where we can look at it and go ‘well, we’ve come so far, why do we need to continue doing this?’,” said Rempel.

Instances like the one described above only add fuel to Rempel’s fire, and serve as a reminder to the community as a whole that comments like Lauten’s no longer go unnoticed.

“When you look at the statistics, when you look at what continues to happen, we know that we do need to keep talking about this and it’s not something that can just be swept under the rug,” said Rempel. “This is one day where we can really elevate it, even though this is something that needs to be ongoing.”

Maureen Bracewell, a member of CapU’s Faculty of Arts & Sciences and an instructor in both Anthropology and Women’s and Gender Studies, along with the Women & Gender Studies Department, DOXA and the FPSE, curated Friday’s events titled “Rethinking Representation: Indigenous Women, Storytelling, and Film”. The event began with a reception in the Cedar Building and a welcome speech by Elder Rose Nahanee (Sesemyia). A special screening of three short films followed from the 2018 DOXA Festival: Marie Clement’s Looking at Edward Curtis in the Pacific Northwest, Asinnajaq’s Three Thousand and Butterfly Monument by Jules Koostachin and Rick Miller. 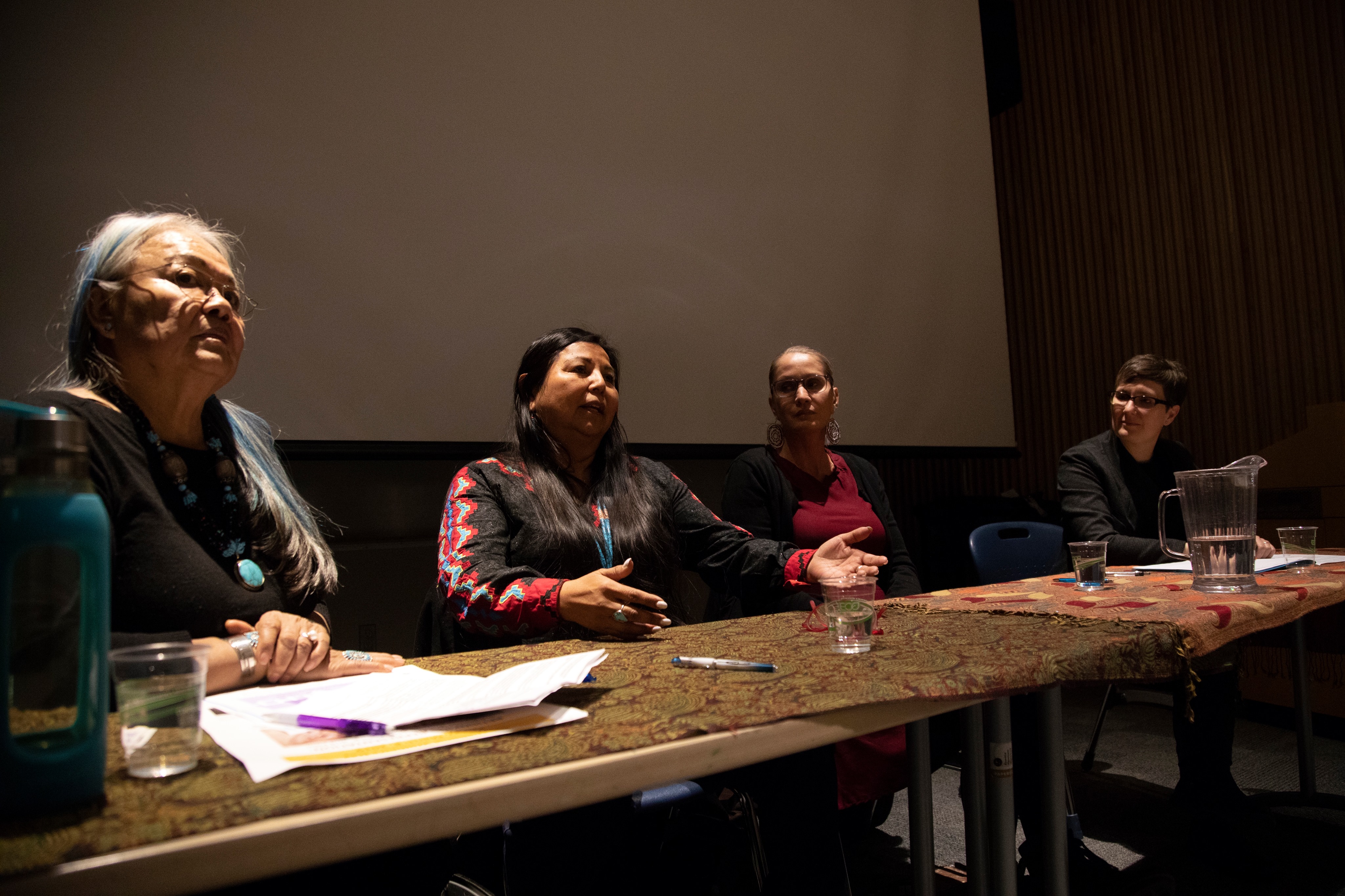 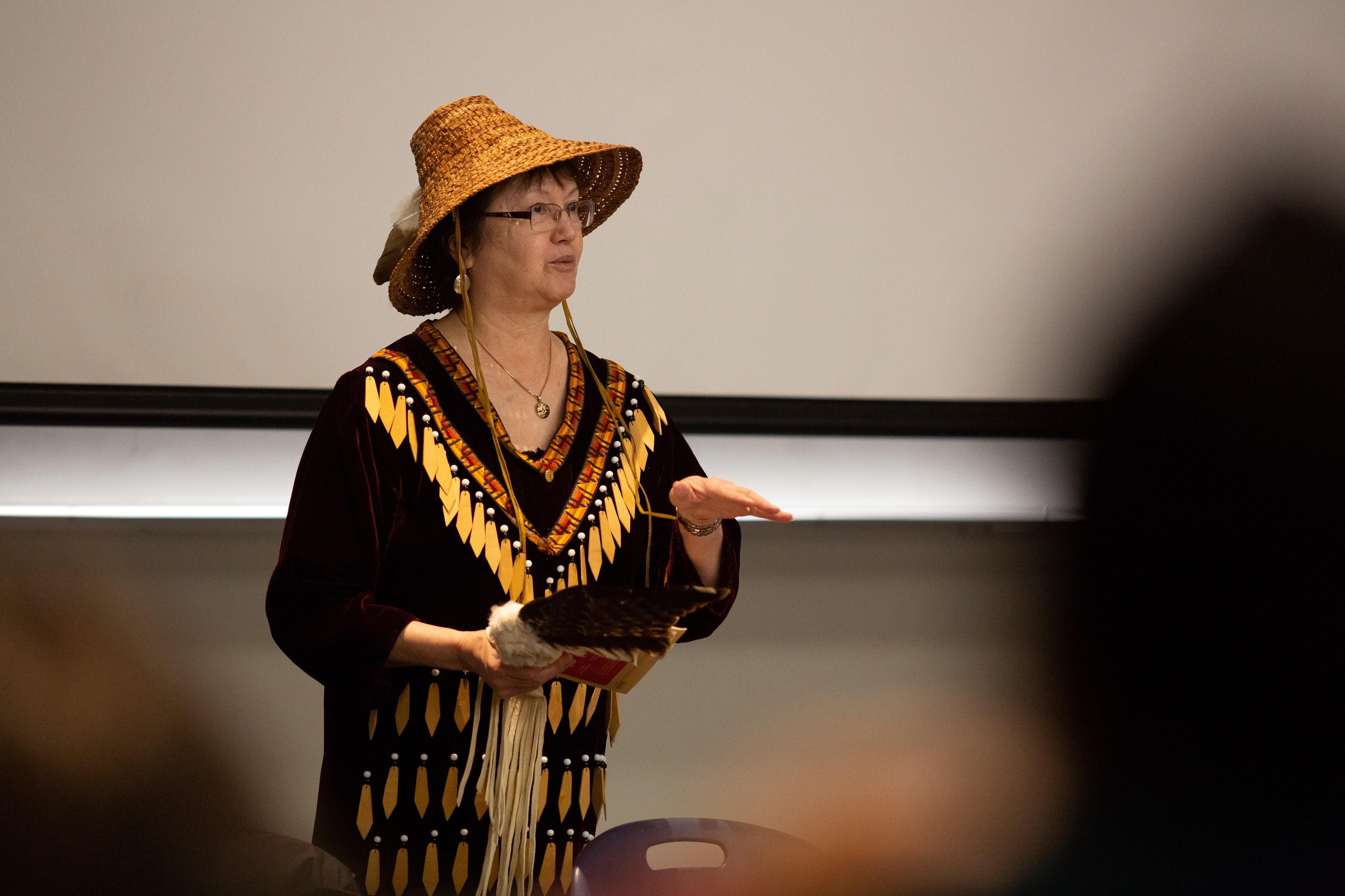