Marijuana has long had a bad reputation – the drug of the lazy and stupid, while alcohol continues to be consumed with little criticism, although booze can have much more severe effects. The main disparity, that some have pointed out, is that alcohol can be enjoyed socially, without the intention of getting drunk, while marijuana almost invariably leads to getting high (without considering uses of CBD oils or other variants meant for pain management or other such issues). However, when considering the use of either for the purpose of intoxication, weed continually proves to be the healthier and more responsible choice.

This isn’t meant to be a pro-marijuana propaganda piece, but rather, it is intended to point out the hypocrisy between being drunk and being high. The fact that auntie Megan can get drunk at the dinner table, slur her words while arguing about politics and people just say, “Oh it’s fine, she’s just had too much to drink” while cousin Connor gets high, falls asleep after dessert and everyone angrily proclaims, “You’re high, aren’t you?!”, is incredibly hypocritical. The drunk aunt is far more likely to cause trouble than the sleeping cousin. See the problem? 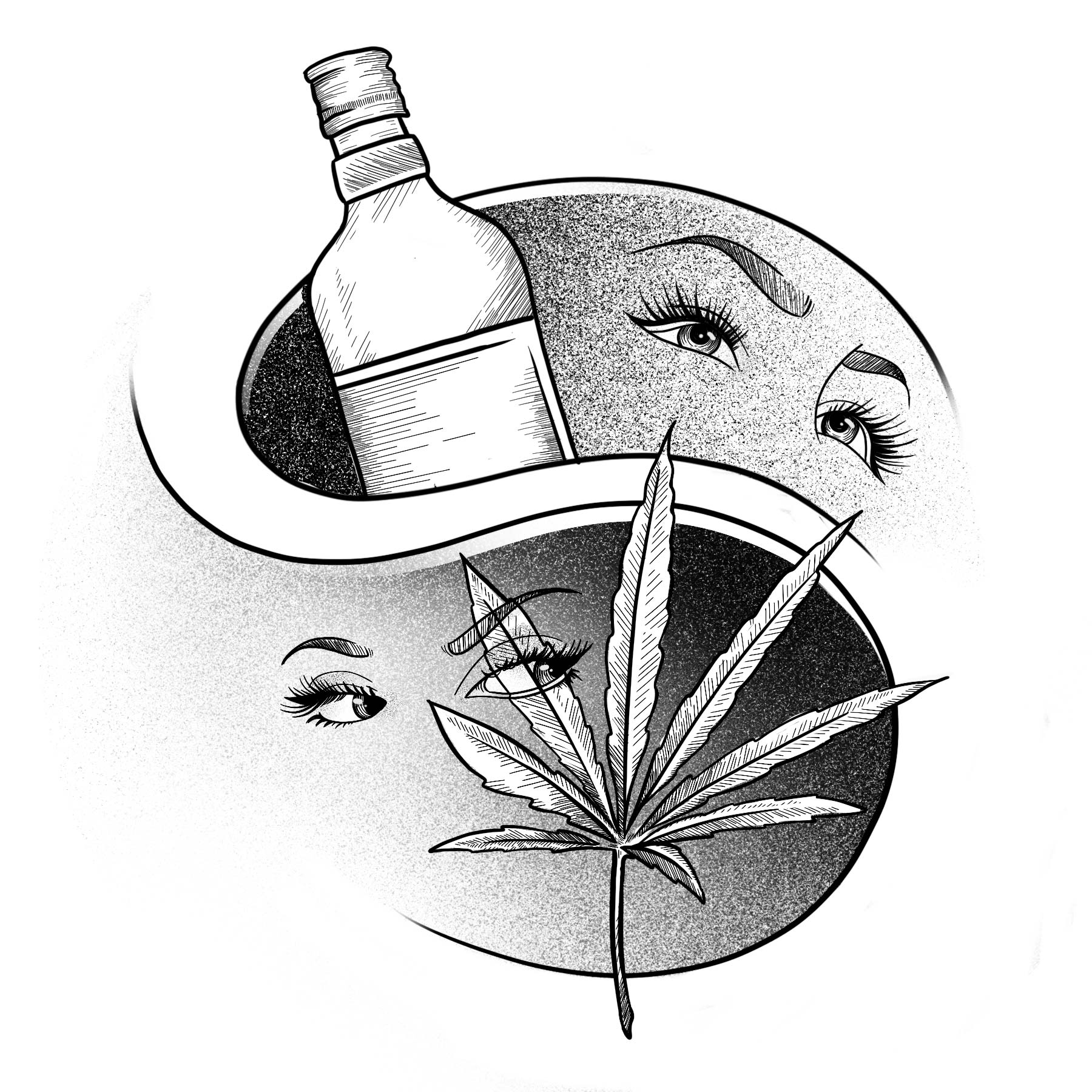 Alcohol is known to have many adverse effects and that’s not just in making your timid friend a strangely brazen asshole. Short-term issues such as impaired judgment, dizziness and vomiting are only a small part of the issue. The long-term effects of chronic drinking can be much more severe, with liver, pancreas, central and circulatory system, reproductive, skeletal and immune system issues, as well as increased risks for certain cancers. Additionally, alcohol also can exacerbate other health conditions, such as mental health or digestive issues.

Delays in widespread legalization have made long-term studies for marijuana effects difficult, but some well-documented issues are breathing problems, memory issues, paranoia and even some instances of psychosis. However, marijuana has also been used to help those who suffer from chronic pain, nausea, trouble sleeping, anxiety and appetite concerns. Additionally, marijuana has been found to have many healing properties, particularly in apparently decreasing the spreading of cancer, treating symptoms of PTSD and slowing the progression of Alzheimer’s, among many other accolades.

Using either substance in excess is not encouraged, however, alcohol has been deemed to be at least six per cent more addictive than marijuana, according to a 1994 study conducted by epidemiologists at the National Institute on Drug Abuse. Alcohol also has a much higher risk for death, as found in a review by the medical journal, The Lancet, “For people between the ages of 15 and 49 years old worldwide, alcohol was the leading risk factor for death in 2016”, while the risk for death associated with cannabis is practically non-existent. There seems to be an endless list of all the ways that alcohol is worse for you, yet marijuana still gets a bad reputation.

This could be due to, at least in part, the highly racialized nature of marijuana usage, wherein ethnic minorities are persecuted not for legitimate crimes, per se, but due to discrimination. This is something that continues today, with a disproportionate number of people of colour serving jail time for minor charges. Either way, the evidence is clear – marijuana has healing properties and alcohol is deadly. Obviously that’s a hyperbolic blanket statement, but there is a great deal of truth to it. Whichever your vice is: let’s stop the judgement and enjoy in moderation.