In his fifth and final year playing for the Capilano University Blues men’s soccer team, Keith Jackson polished off the 2017-18 season winning the CCAA Men’s Soccer Player of the Year award. This isn’t Jackson’s first major accolade however, having previously taken home the title of PACWEST Player of the Year for the second season in a row, along with several other well-earned titles.

The Blues men’s soccer team had travelled to the CCAA Men’s Soccer Championship in Cornwall, PEI, where they finished in fourth place overall. It was on their second night there, at the CCAA awards banquet, that Jackson would take home his award.

“I was very surprised,” said Jackson, “As soon as I won, my whole team stood up cheering and that was one of the best feelings I’ve had the whole season, just seeing them happy for me. That meant a lot.” 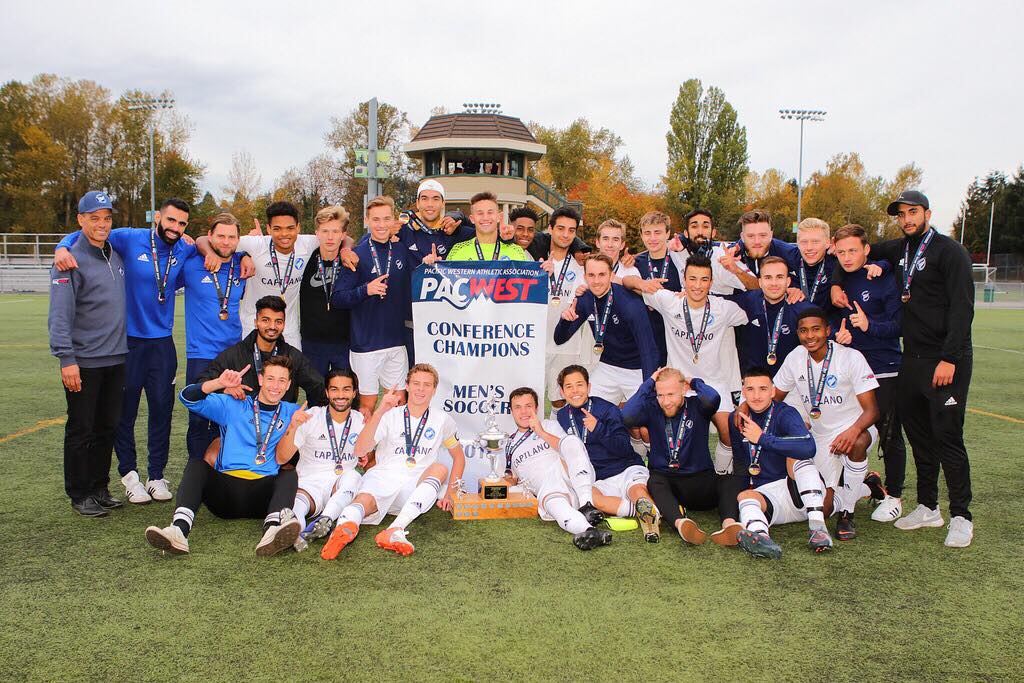 Jackson began his academic career at CapU after graduating from North Vancouver’s Seycove Secondary, where he first entered into the Global Stewardship Program. Wanting to focus on volunteering efforts and not-for-profits, the program was a good fit. “Coming out of high school that was a passion of mine, and still is,” he said.

Although he had played soccer during his post-secondary years, Jackson was involved in a variety of other sports and didn’t consider it a main focus of his – yet. While some of the other players were recruited out of high school, Jackson found his way onto the Blues team after reaching out to then-head coach Paul Dailly for an open tryout. “He liked what he saw, so he signed me for the first year,” said Jackson. He spent his first two years at CapU playing for the team, although acknowledging it was a slow start.

After completing the two-year Global Stewardship program, Jackson decided to take a year off. At the time, returning to CapU wasn’t set in stone.

For four months he backpacked through Central America, travelling through Belize, Panama, Guatemala, El Salvador, Nicaragua and Costa Rica. For two weeks of his time abroad, he took part in a WWOOF (WorldWide Opportunities on Organic Farms) program, volunteering in exchange for accommodation and trying his hand at rural farm work. “It was completely off-the-grid,” he said. “We didn’t really know what to expect going into it. It was a lot of hard work, but it was a great experience and a lot of fun.”

When Jackson returned home, he made his way back to CapU, this time starting a degree in Communications. He also found his way back to the CapU Blues men’s soccer team where he would play his last three years.

“It feels weird that it was my last semester playing for the team,” he said. “It’s great to look at what we’ve achieved since I’ve been here.” Jackson has seen the team go through some major changes since his first year, including the introduction of new head coach Alex Elliott at the beginning of the year. “Alex brought in a new dynamic and a new team environment,” said Jackson.

On winning the CCAA Men’s Soccer Player of the Year award, Jackson acknowledged both Elliott and the team, saying “I think if anything it speaks to Alex as a coach coming in and connecting us right away, and of course all the other players as well. This year we had a great team dynamic, everyone got along very well and the rookies were just as much a part of the team as every other person,” he said.

Jackson believes that with Elliott as their coach next year, the Blues have a great shot at not only making nationals but winning provincials as well. He recognized the hard work of all his fellow players, including midfielders Marco Favaro and Bryce Millway, and defenders Andres Romo and Eric Swanson. “They could definitely be a good core for a championship team,” said Jackson. “My first two years playing for the Blues we didn’t even make playoffs or provincials, now I’ve seen the team go to nationals twice. It’s great to see what we’ve been able to accomplish as a team and I’m definitely going to miss it next year.” 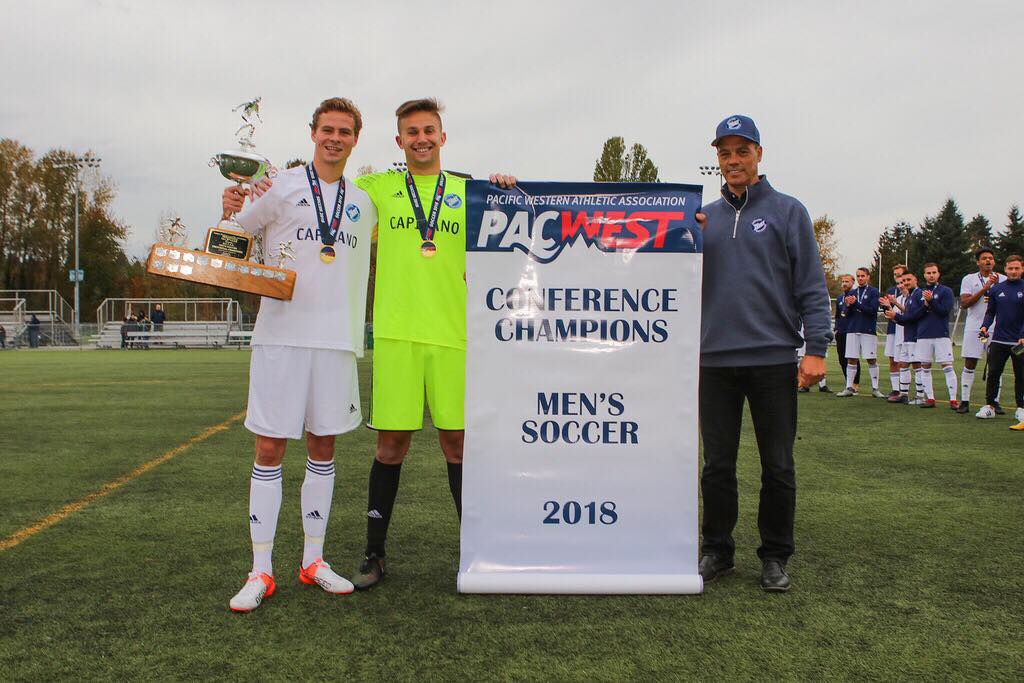 Also in their fifth and final year playing for the Blues is goalkeeper Hudson Nelles, who has the most career shutouts as a goalie in CapU men’s soccer history. “He had a really big influence on the team,” said Jackson. Jackson himself is second on the Blues men’s soccer all-time scoring leaderboard with 38 goals in 56 games.

With graduation in his near future, Jackson hopes to remain involved in the game while also putting his Global Stewardship diploma and Communications degree to use. “It would be great to work for an organization that focuses on developing sport in developing countries,” he said. “I know that living here we’re so lucky to be able to play organized sports, not everyone gets that opportunity.”