UK Prime Minister Theresa May appointed Tracey Crouch in January 2018 to take a ministerial lead to fight social isolation – the first federal government position of its kind in the world. Before she resigned, Crouch was specifically to tackle policy reform in response to a new public health concern: loneliness.

According to research conducted by the Vancouver Foundation, nearly one third of 18-to-24-year-old Vancouverites experience loneliness, despite Vancouver’s thriving arts and culture scene and vibrant nightlife. “I think we live in a time of ‘fast food relationships.’ We consume relationships very quickly, and don’t have time to create deep, intimate connections with people,” said Justine Beaulieu Poudrier. Before moving to Vancouver, Beaulieu Poudrier studied psychology and completed her master’s degree in career counselling in Quebec. Now enrolled in the Documentary program at Capilano University, she is using her educational background to create a five-minute film addressing the stigma of loneliness. 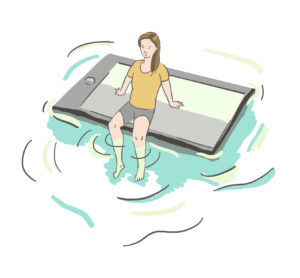 While social media is a common scapegoat, Beaulieu Poudrier stresses that digital technologies are only the harbinger of a more nuanced dynamic – that societies are moving away from practices that are inherently participatory, like rituals, religions and traditions. The human need to connect with others, however, remains persistent. “I travelled to India when I was 18, and I remember the feeling of people really wanting to interact with you,” she said. “When I came back in Canada, I noticed that people don’t look at each other, they just do their things. Everything was very individual. I actually had a hard time coming back to my own country.”

Worse still, social isolation can become intertwined with daily life. With people living further away from work and school to find affordable housing, average commute times have increased while social interactions within one’s own community have fallen. External pressures, like academic performance, add to the loneliness crisis. Of the more than 43,000 Canadian university students surveyed as part of the 2016 National College Health Assessment, 67.8 per cent reported that they felt “very lonely” at one point over the previous 12 months. “People who are trying to communicate in their second-language can feel tired and lonely at some point too,” said Beaulieu Poudrier. “My first language is French, and sometimes, I just don’t want to go to social places where I have to speak English because it takes energy to do that. You feel like an outsider.”

CapU has received criticism in the past for having a poor sense of campus community, given that it is a commuter school. Beaulieu Poudrier’s documentary is focusing on students’ experience with loneliness on campus, but emphasizes, that it is up to everyone, not necessarily an institution, to rebuild community. “Most of the time, when you don’t like people it’s because you don’t really know them. So when you get to know them, maybe they are still annoying, but you’ll have an understanding of why these people act like the way they do.”

While loneliness remains a pervasive issue, in the end it comes down to whether you are comfortable with being alone. “When you’re not able to be with yourself, you can never be with others for real.” The final cut of Beaulieu Poudrier’s documentary is to screen on Dec. 12, 2018 in the Bosa building, along with her classmates’ work.