When was the last time you stood at CapU’s recycling stations agonizing over where your garbage belongs? Do you remember cringing at the beginning of the semester when you had to share your name, program and a “fun fact” about yourself class after class? Turns out there’s an Instagram account that gets your struggles. “I just wanted to share the relatable things that we all experience at CapU that I find funny and thought others would too,” said the anonymous creator of the Instagram meme page @justcaputhings. At least the next time the recycling bins make you late to class, you’ll know you’re not alone.

While many of us see memes everyday, few may know the term was first coined by English evolutionary biologist Richard Dawkins in 1976 to describe how units of cultural information are replicated and spread virally. It was Mike Godwin, an American lawyer who applied the term in a 1994 issue of Wired to the Nazi comparison memes he would see being shared online.

“Memes are an example of postmodern art. They are [postmodern art] point-blank-period,” said Tamia Thompson, an Art History student at Ryerson University. Back in 2016, Thompson was one of about seven admins on Post Aesthetics, a Facebook group which, at its height, housed approximately 40,000 members. The group grew quickly, tapping into a cultural niche. “We were literally just posting things that we found to be pleasing to ourselves in terms of postmodern art, memes, clothes – anything that specifically related to millennials and ourselves,” Thompson said.

While other media like television or radio require us to be passive consumers, memes are a participatory media, making them inherently democratic and easy to share. They give us a chance to splice pieces of our media world and join them together in a kind of cultural collage – screenshotting, cutting and pasting, adding text – to make the images our own. Online, memes often spread virally, becoming part of a collective cultural experience. But the most remarkable quality of this medium could be its flexibility. Each time a meme is repurposed, its previous meaning is altered and distorted. The malleable nature of memes makes it easier for us to latch onto the common experiences and feelings they portray – which can lead to the dilution of meaning altogether.

Posts that typically would have been intriguing went by unnoticed, and the feed became flooded with regurgitated memes and second-rate content. “There would be a funny post and nobody would like it, because everybody’s busy liking some other mediocre post. They weren’t getting any traction because of Facebook algorithms,” she said. “It got to the point where there was just too many people for content to be curated in a way that made sense.” The admins felt the original essence of Post Aesthetics had been bastardized by the constant bombardment of uninspired content, and decided to close the group. “Dat Boi was incidental,” Thompson said, “it just happened to be the straw that broke the horse’s back.”

Memes have become so prevalent that it seems we not only create and consume them, we think in them too. If you find yourself saying “same” every time you remotely identify with something, or pointing to your head and smiling coyly at your friends in reference to the “think about it” meme, then you do it too. “Memethink” is a new term coined in a recent report from BOX1824 (a cultural strategy firm based in New York and Sao Paulo) titled “Gen Exit.” Memethink, as “Gen Exit” researchers Sean Monahan and Sophie Secaf describe it, is “an image-based form of groupthink.” Or, as writer Tierney Finster put it in her Dazed interview with the researchers, memethink is the “collective way of thinking that characterises our social media-saturated world.”

There are real-world consequences to this collective way of thinking. You may remember Pepe the Frog, who went from being a loveable character shared on the greater internet, to a symbol for white nationalism and racism after white supremacists started to associate Pepe with Nazi propaganda in 2015. The initial 4chan post that fueled Pepe’s transformation into an alt-right symbol was a meme with a Trump-esque Pepe at the US Border, smiling at the viewer as two Mexicans in the background stood behind a fence. A few months later, Donald Trump retweeted an illustration of Trump Pepe. Pepe the Frog was forever lost, stolen by the alt-right and branded as a symbol of white nationalism. 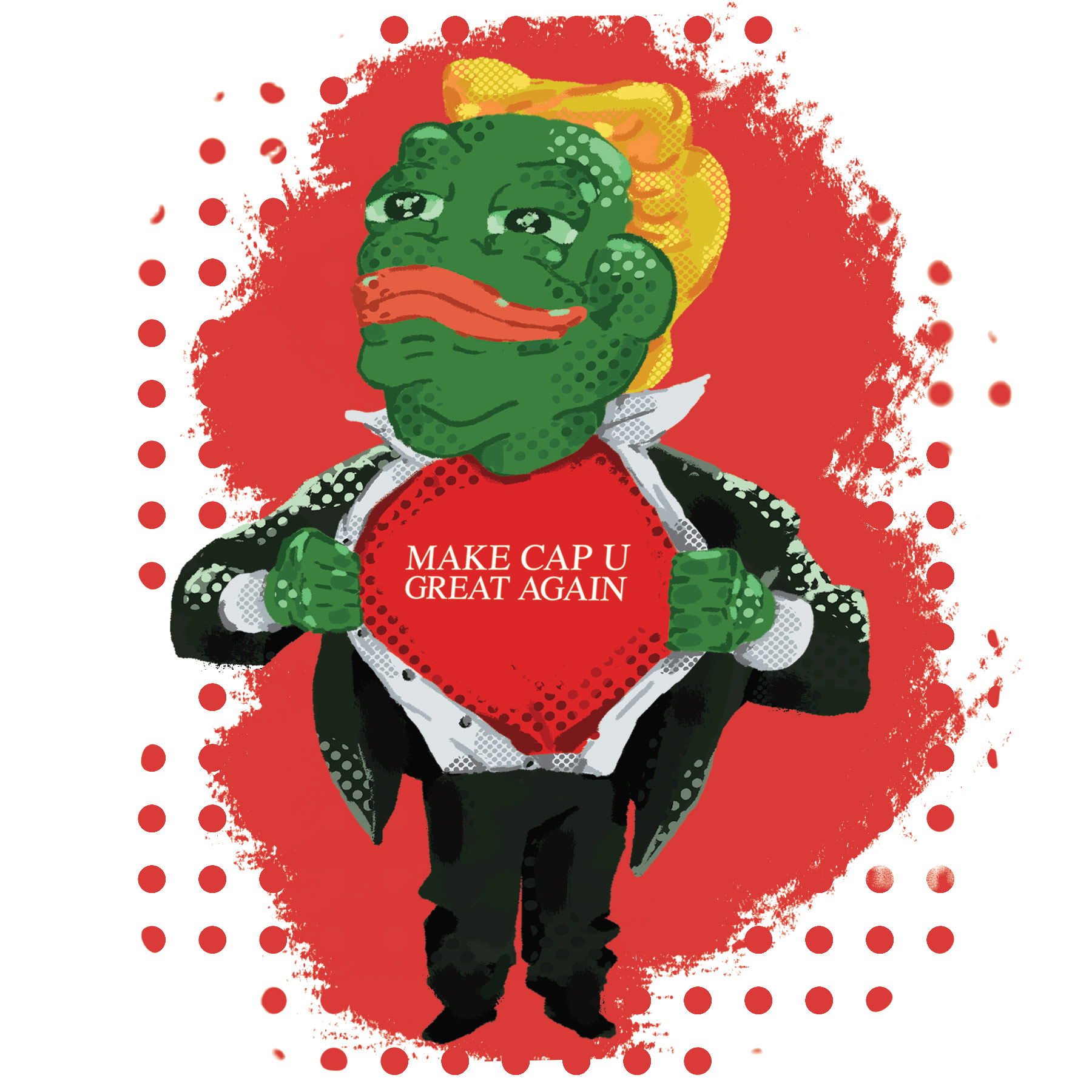 The ease in consuming and interpreting memes, according to the “Gen Exit” report, has led to the alt-right weaponizing them to “redpill” people – a term that refers to ‘waking people up’ from ‘normal’ thinking consisting of liberal or progressive values. “Images are inherently more seductive and often bypass people’s critical faculties, because most people don’t really have an education in critically engaging with images,” said Monahan. “The average person doesn’t look at an image and wonder if it’s true or false or if it’s propagandistic.”

The alt-right load memes with symbolism that reflects their ideology, and because the ideology is in meme format it becomes easier to penetrate people’s thinking and radicalize them. “The most successful memes tend to be the most flexible memes, in that they can mean lots of different things to lots of different people,” said Communications Professor Whitney Phillips in an interview with Vice. Whitney co-authored The Ambivalent Internet, a book on everyday online expression. “It’s a way of feeling connected to other people who have similar experiences, and that can be really positive and life-affirming and pro-social and all these good things, and that is also how people connect with racist memes, because that resonates with their racist sense of the world.”

According to Whitney, the abstract and flexible nature of memes makes it harder for progressives to utilize them. It could be possible that it’s harder to load a meme with progressive ideology because progressive ideology allows itself to have complexity and nuance, and opens itself up to questioning – contrary to the easy-to-consume nature of memes. But the right aren’t the only ones using this medium to propel ideology – socialists have been creating Marxist memes to get people to question capitalism. There’s even an article on Broadly titled, “How Meme Culture Is Getting Teens into Marxism,” which mentions “Sassy Socialist Memes,” a Facebook page with over one million followers. One of the memes posted features the Spice Girls lined up with Karl Marx’s head superimposed over Scary Spice’s face, with the flag of the Soviet Union faded into the image. The Spice Girls hold up the text: “if you wanna be my lover you gotta…” and Marx, at the end of the line up, holds “seize the means of production.”

“I used to find communist memes funny, but now, not as much,” said Thompson. It was her time at Post Aesthetics that broadened her perspective on communist memes and familiarized her with Marxism. With people on the page constantly posting on Marxism and creating socialist memes, she said being in the group helped her develop a critical eye when engaging with internet humour and content. “I started to look communism up a lot more and I started to read a lot more about Marxist theory because it’s interesting and the memes themselves are smart,” she said. “But some of the memes I saw, it was just like – you don’t know what you’re talking about.”

Thompson started noticing people using communist motifs like the sickle and hammer to make their memes funnier. “I found that a lot of the people that were making these jokes on Marx, that were making jokes about communism, they weren’t really founded in anything,” she said. “I’ve actually met people that are like ‘yeah, we need a communist society’ but like, they don’t know why, and they don’t know any nation that’s been communist and it’s actually worked and they don’t have a means to progress from that, to move away from that. They don’t have any talking points about why communism would work and what it would do for people, other than universal things like healthcare.”

Not everyone that comes across a Marxist meme will get it. Thompson noted that the memes you like depend on the experiences you go through and your personal demographic. “Observing a meme and finding it funny versus not finding it funny is exactly a result of your upbringing – exactly a result of what you were raised up to find funny, what you ended up being nurtured to find funny.” Memes not only reflect our sense of humour and tastes, but they shape them. “I can say with a thousand per cent surety,” Thompson said, “that if I did not have the internet community I had when I was a teenager on Tumblr and when I was in college working on Post Aesthetics, I would not have the sense of humour that I have now.”