Without even noticing, you’ve most likely participated in superstitious thinking or behavior. They make us feel lucky, more confident and hopeful, and provide us with the comfort of knowing that perhaps we have some sort of control in our otherwise hectic lives. But superstitions don’t always bring positive vibes. On the flip side, they can make us feel anxious and frightened, or behave irrationally to a point where it can be debilitating.

Many commonly held superstitions date back hundreds of years, and vary from culture to culture. When science wasn’t available to our ancestors, they were used to explain what was otherwise unexplainable. What we may consider absurd or foolish today was once accepted as truth, or at least as a way to understand why things happened the way they did. So why now, when science is so readily available to us, and most things have a valid, reasonable explanation, do we entertain the idea of superstition and partake in certain superstitious behaviours? Most of the time we’re completely aware of how irrational a behaviour it is, but we do it regardless.

“One of my superstitions is I knock on wood every single time I say something that I don’t want to come true”, said Brett Young, a fourth-year Communications student at Capilano University. Young certainly isn’t alone in doing so, knocking on wood in order to prevent a bad outcome is one of the most common superstitions out there. Although it’s difficult to confirm, some believe its origins can be traced to the folklore of ancient Indo-Europeans who believed that spirits were housed in trees. When the tree was touched by someone, they were given blessings and offered protection by those spirits and thus considered a thing of good luck. While there is a belief by some that spirits inhabit trees still, the majority of us would disagree. Despite this, knocking on wood is still a prevalent behaviour in the 21st century. In this case, it’s a superstition based more on habit than belief – something, somewhere along the lines of our lives, that we were told about and have become socially conditioned to do.

“We like a good story, we like something emotional, we like the drama”, said Dr. Lori Walker, an instructor in the School of Communication at CapU. “We’re all kind of drama queens in a certain way. Our brains get kind of a thrill.”

There are two different types of thinking that our brains experience. Walker explained the two parts as the “fast brain” and the “slow brain”. Our “fast brain” is responsive and emotional – it goes on impulse and doesn’t exactly think things through rationally. Our “slow brain” is the critical thinker, the part of the brain that does the analysis. “Superstition is fun because there’s a balance between those two brain systems,” said Walker.

Imagine a black cat crossing your path. Now, if you’re not a superstitious person you’d think “that’s a cute cat” or simply nothing of it. If you were indeed a superstitious person, or perhaps acting under the “just in case” principle, your “fast brain”, or System 1 brain, reacts – you’ve now consciously acknowledged the cat as a threat. Enter your “slow brain”, or System 2 brain, with its logical, rational answer to your fear, telling you that it’s just a cat and you’ve got nothing to worry about. “We love things that are negative and scary,” said Walker, “And when it comes to superstition there’s just the right balance of a threat that’s unrealistic.” 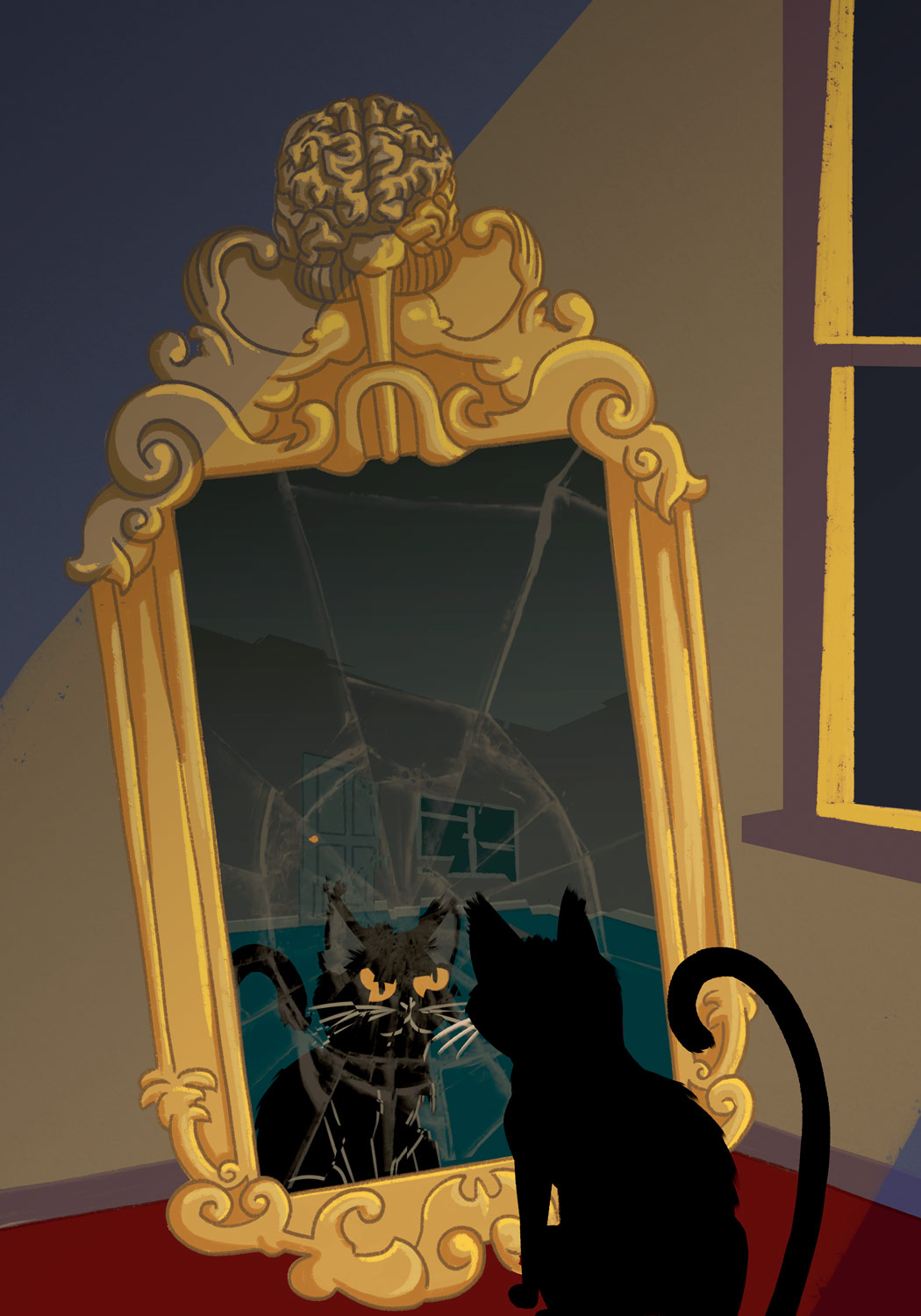 In Stevie Wonder’s 1972 classic “Superstition”, he sings to us “When you believe in things that you don’t understand/Then you suffer/Superstition ain’t the way”. But is Wonder right? Will we suffer if we’re believers of this kind of magical thinking?

The eerier side of superstition appears in many different cultures all over the world. In Cantonese, the word for the number four sounds similar to the word for “death” and is therefore unlucky. Meanwhile in Italy, the number 17 is a cause for the jitters because the roman numeral for 17 is XVII, and when rearranged forms the word VIXI which means “my life has ended”.

“While in Latvia,” said CapU student Tia Kutschera Fox, “we stayed in an Airbnb where the lady had cut off the legs of her wooden bed frame so ghosts couldn’t hide underneath.” Another CapU student, Anahita Moazami, explained that in Iran it’s believed that when someone sneezes, they must wait three seconds before they move or else the devil will “get them”.

Of course, ominous and chilling superstitions didn’t just come to be. They were once (and some still are) used to explain negative happenstance. Zulu mythology tells the tale of the Tokoloshe, an evil and mischievous creature capable of becoming invisible when it drinks water, who is summoned when a sinister someone would like to inflict trouble and pain on others. The beast has its origins in indigenous South African folklore, and is used as a way to explain the inexplicable deaths of people while sleeping at night.

One of the more the common superstitions, triskaidekaphobia, otherwise known as the fear of the number 13, can be traced back to the roots of Christianity. Triskaidekaphobia is associated with the Last Supper, where Jesus Christ dined with his 12 disciples before being crucified. This then led to the idea that sitting 13 people around a table was probably a bad a idea, which gave way to the number being unlucky in general. This belief has become so widespread that buildings across the globe tend to skip labelling their 13th floor. Next time you’re in an elevator take a look at the buttons. Did the floors jump from 12 to 14?

Now, as you know, superstitions are not always negative nor are they just anecdotes for explaining the world around us when we lack an explanation. In many cases, superstitions are our way of manipulating certain circumstances in our favour, or at least that’s what we may think. Athletes are notorious for this kind of behaviour. “If somebody thinks that wearing the same dirty pair of socks, or not shaving during a game is going to continue a winning streak, they’re going to do it because it gives them a sense of control”, said Walker.

In mathematics, the term “spurious correlation” is used to describe a “relationship between two variables that do not result from any direct relationship but is wrongly inferred to be related to each other.” A similar term appears in the field of psychology: operant conditioning. Operant conditioning essentially explains that something is learned through the consequences of a certain behaviour. Although operant conditioning is formally associated with the American psychologist Edward Thorndike, it was another American psychologist and behaviourist that popularized the term. His name was B.F. Skinner. In the 1940s, Skinner introduced the “Skinner Box”, a box fitted with a lever, a bowl and a hidden chamber filled with food used to conduct scientific experiments. The first exercise conducted by Skinner involved rats being placed into the box. When the lever is pulled, food is released into the bowl, but, as expected, the rats did not know this. After spending some time wandering aimlessly around, the rat accidentally pulls the lever, immediately dispensing food into the bowl. This happens a few times until the rat learns that when the lever is pulled it will be rewarded with food – an example of positive reinforcement.

In 1948, Skinner conducted a similar experiment on pigeons. The same box was used, equipped with the same lever, bowl and food chamber. This time, however, Skinner himself would dispense food into the bowl every 15 seconds rather than the pull of the lever. This meant that whatever the pigeon did would have no consequence or influence on whether or not food would appear. The result of Skinner’s second experiment revealed that, like us, animals could develop superstitious behaviours. The pigeons began to develop their own unique movements, a ritual of sorts, which they would repeat thinking that it was the cause of the food being dispensed.

In humans, we see this superstitious behaviour often – good luck charms are a great example. Items like four-leaf clovers or a rabbit’s foot are carried in the wallets and pockets of people who believe that these trinkets carry some kind of magical power or influence. We associate these items with being lucky, when in reality the item had no effect on any positive outcome to begin with. For example, Maksim Rybarenko, a CapU student from Russia, has a piece of red string his mother gave him to put in his wallet to attract money. It doesn’t have to be a string, just something red. Will this result in money flowing into Rybarenko’s wallet? Hopefully, but most likely no. Still, it’s a positive way of thinking that can result in a confident and beneficial outlook on life. So, if you feel so inclined, throw that penny in a well (if you still have one) and break that wishbone. But maybe err on the side of reality here. You still have to put in the work.

“For me, superstition is the belief that one’s ideas, your thoughts, your actions or your words or certain symbols, can influence the cause of events in the real world”, said Dr. Alexander McIntyre, a psychiatrist originally from South Africa. McIntyre acknowledged that superstitions can be both positive and negative. “Sometimes it helps us to gain more control over things”, he said, “…we also know that superstitions provide people with a sense that they’ve done one or more things to try and ensure the outcome they’re looking for.”

The negative superstitions that people may have, explained McIntyre, can also have negative real-world consequences. “It can cause a lot of anxiety. Some people may decide that they’re afraid of Friday the 13th and they won’t work or travel on those days. Or they’ll skip an appointment…”, he said.

For McIntyre, it comes down to how much faith is placed in the hands of a superstition, good or bad. In the case of the Tokoloshe, he said “you don’t consider it a psychopathology, it is just a belief system. But it depends with how much conviction you hold that belief system.”

Now that we’re nearing the end of October and fast approaching the spookiest time of the year, superstition could be considered to be at its most palpable. Unfortunately, the superstitious beliefs that accompany Halloween are generally considered to be in the “bad luck” category.

Holding onto a touch of the unknown can, as Walker noted, give our drama queen brains a little thrill. Maybe a black cat will cross your path, or a crow will give you “the look”, but don’t let it ruin your day. Instead, try Walker’s approach: “Whenever I see a crow, I say ‘Hello crow, hello crow, hello crow’ three times. I don’t know why, I don’t know where it came from, but that’s my superstition and it makes me feel good”, she said. “Rather than feel like it’s scary or bad, my ‘Hello crow’ makes me feel like I’m going to have good luck.” So the next time you feel that little shiver down your spine, make friends with the feeling, and turn that frown upside down.