It was only a year ago when Mellt released Visions, an EP that garnered attention from the likes of various media platforms, bringing them to feature in remixes, and in streamings on Hype Machine and secure an interview on Digital Tour Bus. Mellt consists of Chris Smith, a Capilano University Motion Picture Arts Program (MOPA) alumnus of Spring 2017 (lead vocals, guitar, keyboard, bass), Jamie Turner (drums/percussion) and James Porter (guitar, bass, keyboard, vocals). At the moment, this power trio is working hard at their first full-length album since their formation in 2014.

The Visions EP edged a bit into a dreamy, psychedelic realm, both instrumentally and lyrically. Has your lyrical content shifted at all?

Jamie: This is a lot larger of a catalogue in general. There’s 13 songs so I think the idea of the Visions EP, the lyrics have expanded beyond that, there’s a lot of emotional stuff like in this album as opposed to general kind of concepts about existence in general or more of a broad lyrical base. This is much more specific and I’d say much more personal, I think for a lot of the stuff, but then, we do have the same kind of vibe for some of the songs as well.

Chris: With the personal notes, they’re not written so they’re very specific. They’re kind of still generalized to be interpreted by anybody.

What was the writing process like, for this upcoming release?

C: Well, I mean, it is kind of a mixture of like collaborating and say, sometimes like James would have a loop musically and he’d bring that in say for some songs and we’d kind of work together on building it farther, like making a change, thinking of melodies to go over it.

J: I think with arranging the music, it was very similar to how we usually approach things, it was just on a grander scale, a lot more time I think was the only more difficult thing, I think. For us, we each brought little things into the room and then we developed them together, especially musically, I’d say. And then a few things we just decided to play and we just jammed to and we created completely together so it was a very similar, familiar musical writing process and I think with the lyrics, because that’s daunting to us, more so than the music, speaking for the rest of the guys, but I think we probably agree on that.

13 songs writing lyrics for definitely seemed like a challenge at the beginning but I think that given a lot of the stuff that’s happened to each of us over the last couple of years we had a lot of content to pour out so I think it was a lot easier in the end then when we first kind of sat down.

Is there an overall theme to the album?

C: Well we demoed everything through the summer in my basement so we arranged everything. We had a lot of full, multi-track projects for each one, like at home. And then we worked with the same guy we mixed the Visions EP with, named Kieran Wagstaff, and basically we works at this studio, Fader Mountain Sound and also Hippo Sonics Studio, so we recorded at Hippo Sonic for all the drum tracks like we had everything on the floor, yeah that was like three different Sundays in October.

Some of the bass was used off the floor from some of those sessions and then guitars were all done back at my house. We performed the guitar to the drums, so it was all cohesive and then we took those guitar signals and then got it back to the studio and then ran those through amps so we could refine our guitar tones and sounds and effects, in a really controlled environment. We’ve never had guitars recorded this well before.

J: I don’t think we’ve ever had anything recorded this well.

C: Lastly vocals were recorded in my basement. I just bought a nice condenser mic and did it at home, which took a few weeks.

J: Yeah, it’s really nice being able to split studio with home, because you save on money and it’s also just nice being able to head downstairs and just work on something with no time pressure. Kieran really helped us a lot, he killed it again this time around, so big shout-out to him. 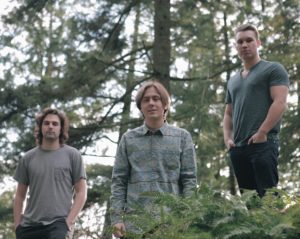 With Visions being such a success, do you have any new hopes for this coming album?

C: I think if we could leverage it to try to get on some kind of tour circuit with another band of a similar genre that’s touring somewhere, whatever it might be, just trying to get like a tour route going or something, that’s what we want this album to use as leverage I guess. If we could be invited to any kind of festival that’d be sick, that’s what we want.

Do you plan on continuing as an independent artist or do you plan on approaching a few record labels in the future?

C: Well we’re going to approach them and we’ll see what happens. If someone was down to collaborate and help us advertise and you know get the reach farther, that’d be great. We can’t depend on that.

J: Yeah, there’s a few different options, but that’s definitely a door that we’d like to explore for sure, if the opportunity comes up.

Have you been continuing to play live shows or has the focus been shifted to practicing and recording?

C: No, James has been away the last few months, travelling in South East Asia.

J: In the Fall we were recording all that, just focusing on that and we didn’t have a bass player at that point and then in the Summer, it was just all writing. So, we actually haven’t played a gig in over a year, so it’s been a long time. But we’re very excited to get playing this Summer, play a lot of shows this year. Late in the Summer and next year is going to be full of shows because we’re itching to get back and be on stage.

To keep up to date with Mellt’s upcoming releases go to: mellt.ca/. Behind-the-scenes takes of the album progress can be found at: facebook.com/MelltOfficial/.