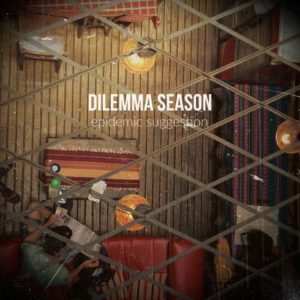 Epidemic Suggestion is the new album from Dilemma Season, the brain child of North Vancouver-based musician Scott Hardy. The album sees Hardy showing a versatile musical skill set across a track list diverse enough to show off his lyrical, vocal and musical range, while remaining cohesive enough to hold the record together.

The album opens with “The Antagonist”, an introspective and spring ready track that kicks the work off on an upbeat and uplifting tone. “a beast of your own mad design, that will antagonise the ego in the skies until it forsakes the prize,” Hardy sings atop a bouncing guitar riff. His poetic self analysis allows him to introduce the mind behind the album to the listeners on the record’s first track.

As the work progresses, Dilemma Season weaves their way in and out of folk and rock stylings, with a nice mixture of upbeat and slower tracks, seeming to have paced Epidemic Suggestion out meticulously.

The final three tracks once again slow things down and allow Hardy’s song writing to shine through. “It’s been this way, it’s been a while since we last tried to make amends,” he admits of a troubled relationship in his life on the closing track “Roots”.

Epidemic Suggestion is more than an album, it’s Dilemma Season’s frontman opening up through a mixture of well recorded instrumentation and thought out lyrics, proving that substance is still supreme.