In late January, another joint CW-Netflix production premiered on the Canadian version of the streaming service. Black Lightning is about Jefferson Pierce, a prep school principal and father of two daughters who can manipulate electricity. The show is set in the fictional black-majority city of Freeland, the size of Cleveland or Flint.

Black Lightning is a great representation of an economically and politically diverse African-American community, but falls short of providing its hero with villains and storylines that are truly ground-breaking.

One of my favorite podcasts, Black Men Can’t Jump in Hollywood, discusses the glass ceiling and racism Black bodies face in the industry.

In their review of another Black superhero flick, Meteor Man, the hosts discuss how black superheroes are almost always limited to the job of saving the hood from powerful drug dealers because the scourge of Black crime is too overwhelming for police departments. These storylines are of course driven by perceptions that police will never be able to address crime in Black-majority cities because Black people are inherently criminal.

In Black Lightning, there is little discussion about what drives criminality in black cities, like economic exclusion and White flight. This absence of nuance reinforces Black criminality as a first option, rather than a desperate last resort. 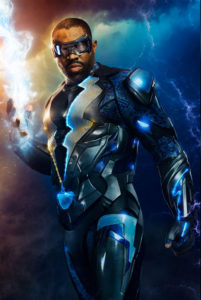 What is great about Black Lightning is its diverse representation of socio-economic diversity in mid-sized Black cities, as well as the wedge that is festering between Black elites and those who feel the full weight of Black oppression. This dynamic is brilliantly depicted through Pierce’s interactions with the wider community, who view him as too moderate and virtuous because of his wealth. I just wish there was a Black superhero – War Machine’s a sidekick – with a purpose beyond saving the block from “yayo” and thugs with “uzis”.

With successful returns from the critically-acclaimed Blade Runner 2049 and the maligned Ghost in the Shell, its no surprise that the ever-opportunistic Netflix is pouncing on the resurgence of cyberpunk. 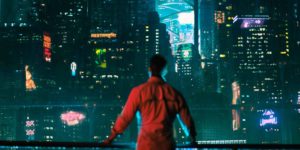 Altered Carbon, based on the book of the same name by Richard K. Morgan, may have found a sweet spot for the hit-or-miss genre: television.

Set over 350 years into the future, the series presents a world where human bodies have become disposable and replaceable. Memories and the very essence of human “souls” are stored in a synthetic disk, and thus can be implanted into a new body – referred to as a “sleeve” in the show’s vernacular – upon the “death” of the previous body.

Led by the steady performance of main star Joel Kinnaman, and some scene-stealing work by Ato Essandoh and Chris Conner, Altered Carbon does just enough to surpass minimal expectations regarding storyline.

Where Altered Carbon truly succeeds is with its world-building. It takes a few episodes to acclimate to, but the show presents both a colourful and a bleak dystopian world that its viewers can inhabit. It exhibits a future that not only shines with its depiction of otherworldly technology, but also with how it suggests that through it all, it is the organic instincts and flaws of humanness that will dictate how worlds move forward – or come crashing down.

Altered Carbon shows that the episodic format could be the key to cyberpunk, but taking too much time could also lead to its downfall.

A much-needed revival of an iconic show

Netflix’s revival of Queer Eye For the Straight Guy is a refreshing addition to the reality TV genre. Featuring five gay guys, who are all “experts” in their crafts, they transform the lives of unsuspecting men in the Atlanta, Georgia area.

Tan, Antoni, Bobby, Karamo and Jonathan (blush) provide entertainment while also exposing viewers to discussions on polarizing topics. Using empathy gained through their experiences of being gay in America, the Fab Five change the lives of their subjects using humour and – gasp – love.

While making their new friends challenge themselves on different aspects of life – fashion, style, cooking culture and home decoration – they shine attention on topics that have been culturally seen as less masculine.

They talk about feelings, confidence, responsibilities and self-care. And they broach polarizing subjects – the third episode features a makeover for a policeman, and Karamo, who is black, admits he was nervous about doing that specific makeover because of the tension between police officers and African Americans. This show is portraying tolerance, something that is arguably missing from the supercharged political climate we are currently in.

As they say in the second episode – sometimes it just takes the fairies to get it done. And if anyone knows Jonathan, please hook it up. I want him to be my new friend.

The End of the Fucking World

A love story that takes place on the run, but is far more complicated than a traditional romance

The End of the Fucking World is a millennial version of Bonnie and Clyde. It’s a love story that takes place on the run, but is far more complicated than a traditional romance. The show’s two main characters, Alyssa and James, while developing feelings for one another, are also beginning to understand themselves.

The two decide to run away from home, but after getting themselves in an extremely precarious situation, their choice to run away turns into a requirement. With the law chasing after them, the two 17-year-old Brits seem to only dig themselves deeper into their problems. However, while doing so, they end up relying on one another more and more.

Although the show is dark, it’s also hilarious. James is sure he’s a psychopath and Alyssa thinks she may be a nymphomaniac – a combination bound to entertain viewers. Much like many other shows about teenage kids, at it’s core, The End of the Fucking World is a coming of age tale.

It chronicles two youth trying to figure out who they are, being thrust into events that will alter the rest of their lives irreversibly, which is where it varies from other shows of the same genre. Often teenage dramas will show their characters dramatically approaching situations like a breakup or a pimple as if they’re going to change their life’s narratives. The End of the Fucking World however, puts its characters in situations that will truly change their lives and lets viewers sit back and watch.