Unnoticed by most, the Blues’ team managers ask for little but give all they have

In the sports world, much of the attention from media and fans is usually directed towards players and coaches, and on occasion, administration. However, amidst all the commotion and excitement that is inherent to organized sports, people are inevitably overlooked.

More often than not, that shadow falls on a team’s support staff. A perfect example of this is the Capilano University Blues team managers. Their names won’t be found on any roster sheet, but don’t be mistaken in thinking they’re not a part of the team. Although their roles vary, most Blues varsity teams have at least one manager who does whatever is needed of them to ensure that the players and coaches can stay fully focused on their task at hand – winning.

Managers perform a variety of tasks. From keeping stats and scouting opponents, to organizing the coach’s office space and helming the coach’s emails, the managers are incredibly active behind the scenes. However, managing a Blues team is purely a volunteer gig, almost always performed by CapU students. As it can become a serious time commitment, taking on the responsibility is not for the faint of heart, but rather the ambitious and driven. 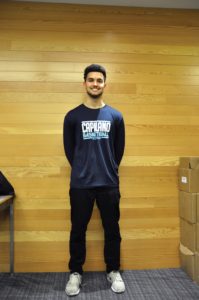 Ryan Fonseca: “If there’s a guy missing we’ll join the drills. Anything that keeps the flow going and makes the transitions in practice easy so the players can do their jobs and the coaches can do their jobs.”

“I met Cassidy last year, but I didn’t really get to know him until this year,” said first year Business student Ryan Fonseca, who alongside fellow first year Business student Jeremy Chu, manages the men’s basketball team. “I was emailing him throughout the summer to try to be a part of the varsity Blues basketball program and showed up to open tryouts on Sept. 20. There was a spot on the development team and the manager position was open as well and he offered it to any of us that wanted to take it,” Fonseca explained.

Both Fonseca and Chu were offered the managerial position after trying out for the team. While they didn’t make the varsity squad their first year, they were also offered spots on the program’s development team, which plays in the  highest division of the school’s men’s league. “I was trying to play for the team, but I took the opportunity to play on the development team and he offered me the manager position,” Chu recalled. Fonseca and Chu jumped at both opportunities, seeing them as a way to get more experience and time around the team as well as show how committed they are to the program.

Although the different teams’ managerial positions are often made known through social media and other channels before their seasons begin, it seems that finding mangers at tryouts is a common occurrence.

“I didn’t expect to be a manager at first,” said second year Human Kinetics student Rudy Mulenda, who managed the men’s volleyball team last year. Originally from Belgium, Mulenda came to Canada last year to study at CapU. Upon arrival, he decided that he would try out for the varsity volleyball team. “I was like, ‘okay, I’m going to join the volleyball team,’ because I played volleyball in Belgium for seven years when I was younger,” he said.

However, things didn’t go quite as planned. Mulenda had underestimated the level of play on the team and didn’t make the cut. “The coaches told me that I was a bit rusty and my level wasn’t good enough to be on the team to which I was like, ‘yeah you’re totally right’,” he recalled. “When I saw the other guys playing I knew that for now I don’t have the same level, but I still wanted to be involved, so they offered me the manager position.”

As he had just moved to Vancouver, Mulenda’s new position was about more than just volleyball. “I wanted to because I had no friends or family here and it was a good opportunity to be a part of something,” he said.

Once Mulenda assumed his position as team manager, the work began. He was responsible for tracking the team’s statistics during games, setting up the team’s camera and recording their games. Mulenda also practiced with the team, helped individual players with their games and helped the coaching staff with what they needed. Once the season hit, Mulenda was in the Sportsplex helping with practice or other tasks four or five times a week and attending most of the team’s games. “I had to train with the guys and then help the coaches also, so it was like balancing the coaches and the players,” he said.

This task is something that Natasha Kroll, the current women’s volleyball team manager can resonate with. Now in her fourth year of her Bachelor of Business Administration degree, Kroll, who played on the team during her first year, has found herself helping the team both on and off the court. As much as she helps the team in practice, be it tossing players balls or serving during drills, Kroll truly thrives in an administrative role. “I love being organized and organizing things so it’s really fun for me to help out with the stats and paperwork,” she said. “I know most people hate that kind of stuff but I really enjoy it.” And there may be no other team in need of her help quite as much.

“The biggest thing is the support. She’s there to take on anything I need,” women’s volleyball head coach Cal Wohlford said. “I have a reading disorder, I’m dyslexic, so sometimes reading my emails and doing my reports are a little bit on the difficult side for me, so she tackles that,” he continued. In fact, Wohlford and Kroll had discovered that they work well together before she returned to manage.

Kroll decided to retire from Blues volleyball after her first year because she found balancing sport and school to be too strenuous in addition to an ankle injury. “Since I’m here for my education I decided that was what I needed to focus on,” she said. However, this was not goodbye for the coach and then ex-player. “After I decided to stop playing I decided to find a job and ended up working for Cal at his volleyball store in Vancouver,” Kroll recalled. She’s now worked there for three years. Then, last summer Wohlford and Kroll began discussing how she could once again get involved with the program and managing seemed like the perfect option. And having been a part of the program for a year, Kroll already knew much of the staff and some of the coaches so she was able to get right back into the swing of things.

For Mulenda, meshing with the team wasn’t quite as easy. He had no prior experience with the program or its players. “At the beginning it was really hard,” he said. “You arrive in a place where everyone knows each other, it’s a team, so they’re like, ‘ok, we have a new guy,’ and I was a bit shy and didn’t know what to expect, so at the beginning I was mainly on my own.”

Eventually however, Mulenda began to gel with the guys – a moment the players remember fondly. “Rudy was awesome!” said outside hitter Justin Yee. “He was a nice guy to have around. He was one of the boys basically and the whole team eventually got really close with him by the end of the season.”

Mulenda also began to have a far greater effect on the team than just providing assistance in practice and statistics. “If something was wrong I loved giving advice,” he said. And the players were just as enthusiastic about receiving it. “If anyone ever was struggling, after talking with him your head was a lot clearer and you were just happier and in a better mind set,” said middle Zarley Zalusky.

The position also benefitted Mulenda on a personal level. When he arrived at CapU he was out of shape. So even though he wouldn’t be playing with the team, Mulenda made it a goal to get into the shape he would need to be in if he were to play. “The guys and the coaches they helped me a lot,” he said. “They were helping me to reach my goal and I really appreciate that.” “He become one of the most integral parts of our team dynamic inside and outside of the gym,” added team captain Simon Friesen.” 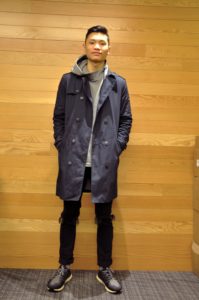 Jeremy Chu: “I was trying to play for the team, but I took the opportunity to play on the development team and he offered me the manager position

Currently, Fonseca, Chu and Kroll are all managing their teams. Kroll enjoys being around the sport and the work she does as the manager. “They treat me like a member of the coaching team and I am thankful that I get to be a part of this incredible team,” she said. “One of the things I wanted to do when I came to Capilano was to be a part of the basketball program,” Fonseca said. “Whether it be as a manager or to be on the development team, just to be a part of the culture has been a great time so far.” Chu agreed and added that they both hope to earn a playing role on the team next season.

Unfortunately, Mulenda decided not toreturn as manager this season. Although he wanted to, the time commitment was too much. He does feel that the managers often deserve more recognition than they receive, which is something Wohlford agrees with. “They definitely go unnoticed,” the coach said. He could remember a time when was an assistant coach for the UBC men’s volleyball team, that after noticing the team’s manager may not have known how appreciated she was, Wohlford mentioned it to the coach who later applauded her. “We were on a road trip and he said something to her and oh my god, she was beaming for the rest of that weekend.”

Being a manager then, is no easy task. It’s a job with no real description other than to help in any way you can, or are needed to. It’s often a way for ambitious athletes to show their dedication to the Blues program, while integrating themselves into it. It holds no promises though. Even if it never leads to a roster spot however, managers are just as integral to the Blues program as any player. They allow the teams to reach their maximum potential, yet ask for little in return – they are the best teammates a player could ask for.

“I’ll always be a Blue in my mind. Even though I’m no longer the manager, I always think about them,” said Mulenda. “I told them, we’re not just a team, we’re a family. I know I can trust those guys and they can trust me.”