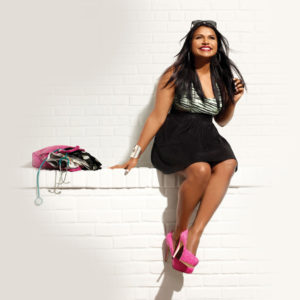 Mindy Kaling’s rom-com was a smashing hit, until season five

Anyone who remembers Kelly Kapoor from The Of ce. Well, the actress and writer Mindy Kaling left in 2012 to star in her own comedy series, The Mindy Project. Kaling stars as Dr. Mindy Lahiri, a hopelessly romantic OB-GYN looking for her “one” true love in the Big Apple.

The Mindy Project is refreshing. There’s plenty of drama and gossip during complicated surgeries as seen on Grey’s Anatomy, which is a huge bonus if you’re squeamish. And Mindy herself is the polar opposite of the stereotypical Hollywood love interest: petite, blonde and innocuous. She laughs at her own bad jokes. She has a killer sense of style and a confidence in her body despite repeated jabs at her weight, and she hooks up with every man she can get her hands on. If the typical rom-com love interest is an example of the old trope that women are sugar, spice and everything nice, then Mindy is sarcasm, wine and everything ne.

At least she was until the end of the show’s fourth season. Within a year, the staff of her practice, Shulman and Associates, is barely recognizable. The womanizing Dr. Jeremy Reed revealed a traumatizing past and started dating a string of women who walked all over him. Mindy herself has become unbearable right down to the way she speaks. Once sounding con dent and witty, she now she just sounds downright vapid for a doctor and her catchword “ex-squeeze me” instead of “excuse-me” is overused. Only nurse (and reformed car thief) Morgan Tookers retains his inappropriate charms and keeps viewers laughing.

I haven’t seen any new episodes from the sixth and final season, but from the buzz around it I gather there are a couple reappearances from some past favourites. This might be the show’s stellar comeback, but I doubt it. If you haven’t watched The Mindy Project yet, give it a go. It’s highly fortifying and Mindy’s sense of humour in earlier episodes will cure any heartache better than a bowl of salted caramel ice cream. But unless its nal season delivers a remarkable conclusion it’ll just be another one of those shows that ran far longer than it should have. 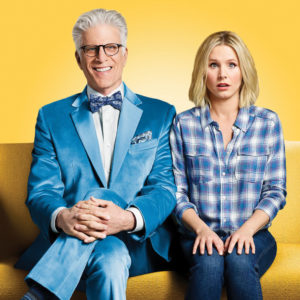 TV’s best comedy is the one about death

Every great comedy in the sitcom pantheon rests its laurels on its cast’s dynamic chemistry, and The Good Place does exactly that.

With its second season currently on air on NBC, and its rst season wholly available on Net ix, The Good Place makes for perfect binge worthy television. With just 13 episodes per season, each running at 22 minutes, catching up should be no issue.

While the foundation of the story follows the tried and true concepts of the afterlife – “The Good Place” is blissful heaven and “The Bad Place” is eternal damnation – the way it presents its characters is refreshing, and at times, thought-provoking.

Lead actress Kristen Bell plays Eleanor Shellstrop, a deceased saleswoman who mistakenly ends up in The Good Place when the life she lived was anything but virtuous. The gaffe ultimately wrecks havoc in the serene environment, and viewers are treated to some excellent performances by the rest of the core cast, which includes the likes of Ted Danson, Jameela Jamil and the delightful William Jackson Harper.

The show carefully tackles the nuances of morality and features a healthy dose of humorous lectures on Kantian ethics. On top of it all, The Good Place doesn’t shy away from risks. Not only does it break the rules of great TV writing, it creates its own. Twists and turns are like unforeseen left hooks, shocking viewers time and again.

The Good Place is irresistible television. It’s run-time, bevy of curves and cliff-hangers and its constant reminder that so much of death, is really about life, makes it the perfect show to binge watch. 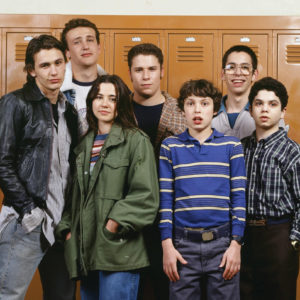 The series that could have been

If you’re anything like me, getting to sleep can be challenging. The second my head hits my pillow, my body is ready for sleep, but then my mind decides that it’s time to remember how poorly I handled a situation with a girl I liked

in high school, or some other unimportant and embarrassing past event. Our teenage years can be some of the most confusing and we often feel as though no one understands what we’re going through.

While it only aired for one season, 1999’s Freaks and Geeks is one of the most relatable shows I’ve ever seen. It captures the awkwardness of the teenage years perfectly, all while addressing serious social issues. A single episode can cover topics like a rst break up, free speech and political freedoms, gender identify and how to cover up a hickie.

Set in the early 1980’s, the show was the starting point for some of today’s notable actors. James Franco, Linda Cardellini, Seth Rogan and Jason Segal all starred in the show, and weren’t much older than their characters when they did.

The show also does a good job of offering a diversity of characters. While viewers may not be able to identify with all of the characters, there’s a good chance that they will be able to empathize with at least one of them.

Freaks and Geeks is not only entertaining, it’s also empowering. After all, we’re all freaks and/or geeks in one way or another.

The best offensive critique of racist patriarchy on Netflix

Every great show has something that’s painfully bad about it. Netflix’s newest comedy-drama, GLOW, perfectly embodies this paradox. The show is about an upstart wrestling promotion set in 1980s. It’s named after the real-life Gorgeous Ladies of Wrestling promotion of that same era, though the characters and gimmicks are fictionalized for the series.

Starring Alison Brie and Beth Gilpin, many cast members of GLOW are dressed to elicit the male gaze, as is the case in professional wrestling. However, if you can look past that (though you shouldn’t) the show provides its viewers with a level of intersectional social criticism that has never been timelier given the political climate.

Satirical social commentary is never easy, but GLOW is doing it in a way that most comedies don’t. Mirroring contemporary critiques of how show business sexualizes women and racializes minorities to entertain a primarily white and male audience, GLOW assigns stereotypical backstories to its roster of wrestlers.

However, the on-screen anguish these characters display when reconciling their hyper-sexual and racist personas is what places GLOW in a league of its own. Unfortunately, many of the characters end up embracing these backstories, or internalizing that being cast is better than nothing – the main tragedy of showbiz.

Overall GLOW is a glimpse into a cultural period not much different than our own. Watching how the characters cope with obvious racism and sexism in their non-wrestling lives makes me think of just how far we have to go. I’m sure it’d take Harvey Weinstein back.