Romance is all in the smile

There is just something about baseball. Sure, all sports have their qualities, the attributes that make people follow them with religious devotion and blind love. Think of the graceful height of basketball players or the concussions of football players. But to me, baseball is more unique.

I realized I love baseball in the spring of 2016, when an ex and I would spend every Sunday hungover to the tits, watching endless baseball games. He serenaded me with stories of the different clubs, infamous ball fields and what made some umpires better than others. He told me specifics and stats on every Toronto Blue Jay, the team that has forever captured his heart.

His favourite story was about Josh Donaldson, the Viking warrior on third base for the Jays. Donaldson grew up in Florida with a convict for a father. His dad spent most of his formative years in jail, and was released in 2007, the same year that Donaldson (the bringer of rain, as per his social media handles) made his major league debut. My ex would recite these tales as if they were bedtime stories and I began to fall in love with the characters, all of them. And when we broke up, baseball bedtime stories are the one thing I kept from our relationship.

After our split, I hatched a different plan. I was going to marry an American baseball player. I wanted an American passport to live in Chicago and this seemed like the most ingenious way to get it. Hey, if you’re going to live in a daydream, it might as well be a baller one.

People started inquiring about my sudden love for baseball and why I wouldn’t shut up about it. I watched the Jays with more loyalty then I had given any of my previous relationships. On Oct. 4 2016, they hosted the Baltimore Orioles in the American League Wild Card game, playing to get into the playoffs. When Edwin Encarnacion hit his walk off home run to secure the game, I realized what I loved – their smiles, their emotions. There is something more genuine about baseball players, as their faces aren’t covered by helmets or mouth guards, a la hockey or football, North America’s two other major sports obsessions.

Not only is it entertaining to watch perform at an elite level, it’s even more interesting to see it with genuine emotions splattered across their face.

Because their faces are more easily readable, showcasing their grimaces after every misplay, effort in a stolen base and relief with an out eld catch, it’s easier to relate to the players. This is what attracts me to baseball, and probably why I now exclusively refer to it as “babeball”. Not only is it entertaining to watch perform at an elite level, it’s even more interesting to see it with genuine emotions splattered across their face.

And of course, there are other sports where the players’ faces aren’t hidden by helmets, such as soccer or rugby, but again, there is something unique about baseball in it. Because of the mild tempo and style of baseball, players get a chance to relax in between plays, so their face doesn’t always have to be shrouded in concentration or have a façade of fierceness, akin to soccer players. Next time you’re watching a baseball game on TV, whether on purpose or by accident, watch for when a player hits a base hit, gets to first, and his face breaks out into a giant smile as he shares a joke with the first baseman and tell me that’s not one of the best things in sports.

People often fall in love with a smile first. So it’s completely understandable why I have fallen in love with the majority of players in Major League Baseball. Their smiles suggest that even they are enamoured with the sport and that they absolutely love what they do. Maybe it’s this romance as to why it has become an American treasure, why songs, poems and books have been dedicated to it and why I’m dedicating an entire column to it. There is just something about it, a grace in how it relates into every facet of our world, including – almost most importantly – love and romance. 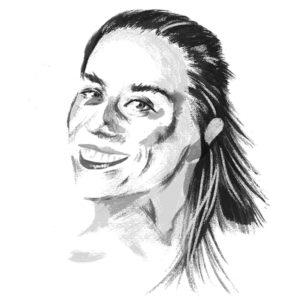 Long-time Courier friend Leah Scheitel is back to write about her favourite thing in the world: men – specifically baseball playing men. With her new column, Leah will take readers through all three bases of the diamond and the home base too!