The genre-less producer returned to Vancouver with a new show

I was already a little disappointed by this show before it even started. Not because of the lineup, but the venue. I love Fortune Sound Club. It’s got a great sound system, a good layout and design and an all around pleasant atmosphere. Unfortunately, one of the reasons I had been excited for this event was because it was supposed to be at the Commodore Ballroom. When it comes to concerts, it’s one of, if not my favourite, venues in the city. 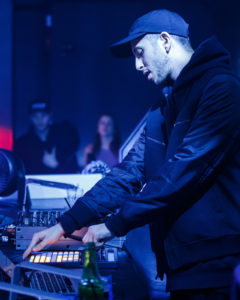 However, as I ascended the stairs to Fortune’s main room, I could feel the anticipation building.

D33J had just begun his impressive set and already had the room in a trance. Although he only played for about 45 minutes, he delivered. By the time his set was over Fortune, was filling up and the energy was evident.

The show was technically headlined by Corbin, but I had come to see The WEDIDIT headman, Shlohmo.

His stage consisted of a faux-stone podium, some potted plants and a neon iteration of his signature rose that didn’t seem to be working that night. It was clear that the setup was designed for a bigger stage like that of the Commodore.

“Wuddup Vancouver, it’s really good to be here and see you guys again,” he said as he took the stage.

His set started with the first five tracks off his album Dark Red. While songs like “Ten Days of Falling” and “Meet Ur Maker” were treated to live edits and performed on synths and midi controllers, the next three saw him show off his guitar skills. The guitar seemed somewhat forced at times, but bringing live instrumentation into his show added to the performance.

After “Slow Descent” he debuted an untitled new track. The signature basslines were present, but the song showed growth in his production style. What sounded like a chopped and screwed ice cream truck rode the low end while he played his guitar once again. This time however, the strings seemed more natural to the song, showing a growing level of the incorporation of it into his music.

“Later” received one of the most enthusiastic responses of the night. The crowd moved in unison like seaweed, moving with the deep baselines and pitched vocals that bellowed out of the Funktion-One sound system.

Closing with “Beams”, Shlohmo ended the night on a high note. It was the perfect track to close out Dark Red and the show. I’m always impressed with Shlohmo’s live performances. While the venue change clearly threw a wrench into the stage design, the performance itself was unfazed. 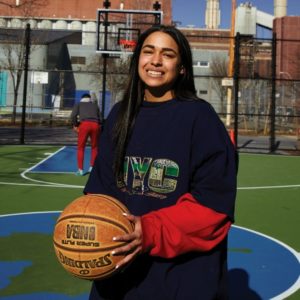 It’s been an exciting few weeks for female rappers. Cardi B’s “Bodak Yellow” is perched at number two on the Billboard Hot 100, Nicki Minaj casually earned her 81st entry on the charts with her feature on “Rake It Up” and two promising young artists –Princess Nokia and Leikeli47– both released fantastic albums.

What’s most exciting is how unique each artist is, and the lane they’ve been able to carve out in a male-dominated industry. Princess Nokia stands out for her brand of “weirdo-rap”, which she describes as a mix of “old-school hoe with new school flow.” 1992 Deluxe is split between mellow, East Coast rap-inspired tracks and quirky trap anthems.

While this is Princess Nokia’s third album, in many ways it serves as an introduction. On nostalgia-steeped tracks like “Saggy Denim” and “Green Lines”, Princess Nokia details her life as a biracial, queer tomboy growing up in New York’s foster care system. Her struggles and differences as a kid later become her strengths and defining features. “Brujas” is an icy trap song that places Princess Nokia as the supreme of her coven – in respect to her Puerto Rican and Yoruban ancestry. On “Tomboy”, she brags “With my little titties and my phat belly/I could take your man if you finna let me,” combining rap braggadocio and body-positivity. Princess Nokia’s perspective is original, refreshing, and has the potential to tap into a completely new audience like oddball rappers Tyler the Creator or Lil Uzi Vert. 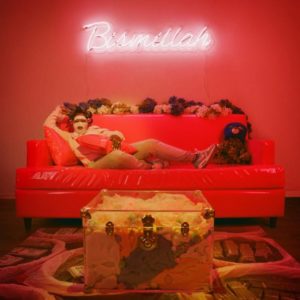 Leikeli47 released her first single, “Miss America” in 2012, and while that track might not have gotten the recognition it deserved, the balaclava-clad beauty definitely did not let that slow her down.

Since then, the Brooklyn rapper has released a multitude of obsess-worthy tracks. Her debut LP Wash & Set, graced the music scene on Sept. 8 and has already become one of the most talked-about albums of this year.

Although she stays “out here masked up like a Mexican wrestla,” we do get a good idea of who the woman beneath the mask really is through her music. The boom bap rap EP speaks on 47’s individuality and positive nature as an artist, while telling her story of growth and independence.

The records first track, “2nd Fiddle” shows us a softer side of the MC, while at the same time showing us that her feet are firmly planted in the ground. Other tracks like “Braids tuh’ da flo(w)” and “M I L K” takes a stand against standard beauty norms, with a strong focus on women’s hair.

This take-no-BS female, and she’ll tell you that herself on her track “Miss Me” is only just starting. Even though the mask stays on, for now at least, we’ve never seen her more clearly.

The Killers new albumWonderful Wondeful will suffer from the same problem as most of the groups other releases – comparison to their early works. Ever since Hot Fuss and Sam’s Town the group has struggled to grow as artists, failing to reach the heights that their early albums did. They’re like the Blake Griffins of modern rock – we know they have talent, but they never seem to be able to live up to the standa 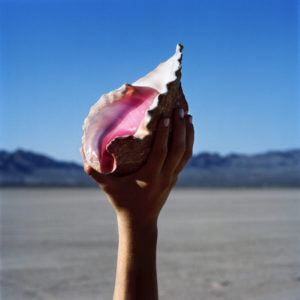 rd they set for themselves at the beginning of their career.

The opening track, “Wonderful Wonderful”, gives listeners hope. With a horn reminiscent of one that may echo through the forests of Endor, the track evolves into an anthemic offering with distorted tom hits scattered throughout.

“Run for Cover” sees the group returning to what they do best – a mixture of rhythm guitar and keyboard synths. “Run for cover/run while you can baby don’t look back,” sings frontman Brandon Flowers. It even has a heavily filtered guitar solo.

The group slows things down a bit on ballads like “Life to Come” and “Some Kind of Love”.

The album’s strongest offering however may be “Tyson vs. Douglas”. Opening with the audio clip of announcers calling Mike Tyson’s knockout at the hands of Buster Douglas, Flowers recalls being a child and realizing the vulnerability of humans as he saw his hero fall. “I had to close my eyes just to stop the tears,” he recalled.

While Wonderful Wondeful is no Hot Fuss it shouldn’t be overlooked, it’s worth a listen or two.