When Ian Kaart approached Cynthia Tran Vo about collaborating on his piece for the Vancouver Mural Festival, Vo naturally had a lot of questions. None more pressing than, “why me?”

Both of the third year Capilano University IDEA School of Design students are a part of the program’s 2019 graduating class. As with every annual crop of students that get accepted into one of Capilano’s most rigorous programs, Vo and Kaart’s batch grew to become a tightly bonded group of artists.

Except the two couldn’t have been more different from one another. “It was weird,” Vo said. “We weren’t as close because when it comes to the spectrum of IDEA students, we’re on totally different sides.” 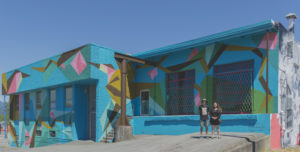 A Tale of Two Styles

While both have excelled in diversifying and expanding their personal artistic philosophies, the roots from which their styles are founded upon are as far apart as any. Vo comes from a heavy digital background, having been exposed to Adobe suite and code during her high school years in Vancouver Technical Secondary. On the other hand, Kaart grew up learning fine arts. His portfolio, while increasingly varied, features a strong connection to traditional means, as evidenced by his proficiency with acrylics, oil and graffiti.

The paths that both artists took to get to IDEA were also in stark contrast of one another. Described as “the baby of the class,” Vo applied to CapU straight out of high school. Then a 17-year-old artist, she initially felt daunted by the environment around her, reminiscing on a moment when she deduced the average age for the class couldn’t have been below 23. “It was so scary. I was so lost.”

Even more intimidating was the portfolios that her cohorts were exhibiting. “Everyone had a portfolio style or had an idea on what they’re going into,” she said. Although her experience with digital tools gave her a leg up in the graphic design facet of their program, she found herself at a disadvantage when it came to illustration. Essentially, Vo had to learn backwards. “I personally steer away from traditional art and traditional art mediums were my personal hurdle when joining the IDEA program.”

Kaart’s journey to Capilano took a little more trial and tribulation. After graduating from Rockridge Secondary, he attended the Alberta College of Art and Design (ACAD) to study fine arts. However, after a year, he reconsidered his options, doubting his decision to pursue a degree so soon. He took some time off from his studies, bounced around a few odd jobs at a handful of restaurants and even tried going into other career paths. A four-month trip to Europe later rekindled his love and passion for the arts, ultimately motivating him to reconnect with one of his high school teachers, who in turn recommended the IDEA program.

Unfortunately, Kaart’s initial application to the notoriously tough program was rejected. Instead of seeking out other schools, he chose to work on his portfolio and try a second time. “It’s where I’m at now,” he said.

If Vo was intimidated by traditional fine arts, Kaart’s challenge came with digital. For first year IDEA students, their initial semester tends to be dedicated to working on foundational and traditional fine arts skills – exercises and styles that Kaart already had experience with. But it was the second semester shift to digital media that truly turned the tables against him. “That was quite a learning curve,” he said.

There are many circumstances that could beg the question of why Kaart would approach Vo about collaborating. There are plenty of other talented artists in IDEA, some of whom might even be closer to Kaart on both a professional and personal level. Despite the many factors that would have to be accounted for when finding a partner for such an endeavour, Kaart valued one attribute above all else: work ethic – particularly regarding projects outside of the IDEA program. 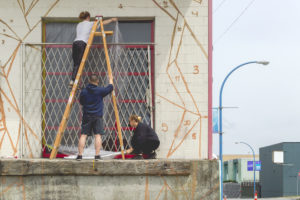 Drew Young is inarguably one of the more recognizable names to have come out of the IDEA program. He’s had his work exhibited in galleries and shows around the world, became the youngest teacher for the Federation of Canadian Artists and the Visual Arts curator for TEDx Vancouver.

In the local scene, Young famously created and curates Snag, a weekly live painting raffle that features some of the finest artists in the Lower Mainland. Two summers ago, he helped launch what has become one of the city’s most popular annual celebrations: the Vancouver Mural Festival (VMF).

Kaart met Young through Snag and over the years developed a relationship with the renowned artist and curator. Early this summer, Young approached Kaart about an opportunity to paint a wall for the VMF, but with some important caveats: the wall, located on 876 Cordova Diversion, doesn’t have the best exterior for painting – making it rather difficult and unappealing for many artists. The other was that time was in short supply.

Before it was time to paint, Kaart had only a week and a half to find someone to work with, create a design and get everything submitted. Accounting for the restrictive schedule, he analyzed and pondered about which of his classmates he could best work with, but he wasn’t looking for someone whom he was necessarily close to. It was about punctuality and dedication. “Cynthia has always been someone in the class that is passionate about her work, she is always doing something new, bringing new ideas to the table and she’s very graphic in her approach, and at the time I was very illustrative,” Kaart said. “I thought that relationship would be very useful, and it turned out to be the best relationship ever.”

The design that they ultimately submitted is an amalgamation of elements that contribute to Vancouver’s eclectic identity. They selected Anna’s Hummingbird as a subject, to commemorate its selection this past May as Vancouver’s official bird.

The building, located right where Cordova and Powell meet, inspired the design’s Japanese essence. Powell Street is noted for its once bustling community of Japanese immigrants, and the cherry blossoms that flicker across the mural are meant to pay respects to the Japanese-Canadian soldiers who served in World War II. The mural’s geometric style represents origami, which has become one of the most iconic symbols in Japanese culture.

“Ian and I wanted to have meaning behind our work,” Vo said. “In our design projects, we’re always taught that its good to have a rationale about why you’re doing this.”

Conveniently, the geometric look of the design allowed the artists to orchestrate a paint-by-numbers type of system. The painting process involved the help and contribution of 17 other IDEA students, and as project lead, Kaart needed a way to manage numerous artists and keep them on task.

As with most projects, everything that could go wrong did go wrong. The surface of the wall was far too rough for even a simple paint job, much less a complex, geometric mural that required the straightest of edges. “It was like corrugated stucco,” Kaart described. “So, it’s like the worst kind of wall surface you could ever imagine to paint on.” To counteract the problem, Kaart planned to strictly use spray paint for the entire wall, which would help ensure that the lines get as crisp as possible. After placing a massive order, Kaart found out that there was a limited supply of spray paint available at the time – in the entire country. He ended up receiving just 30 per cent of the full order, which forced the team to use latex paint for the rest of the wall. The order fiasco ultimately delayed their painting start by an entire day.

Midway through the project, Kaart and his team was hit with another blow. “About halfway through painting the mural, the lift broke,” he said. A repairman was called in to fix the issue, but ultimately found that the team would be better off getting a replacement lift. As fate would have it, getting a truck to replace the broken boom lift rendered the wall inaccessible, costing the team even more precious time off their project.

Oh, and there was an infernal summer heat, too. “It was blaring hot,” said Vo. “Our mural wall was in direct sunlight the whole day and we’re up on this lift and the sun is hitting your back.” 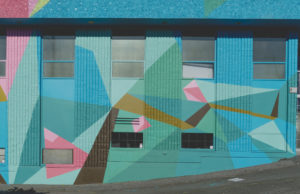 Despite being quietly sheltered in the Arbutus Building, IDEA has become one of the most well-renowned programs at CapU. “Our graduates have a longstanding reputation as coming out of school ‘studio-ready,” said Pascal Milelli, illustration instructor and co-coordinator of the program. “They [the graduates] know how to work in a professional setting, they conduct themselves as professionals and they produce work to industry standards. Our illustration curriculum – both traditional and digital – has always set us apart from other programs, certainly out west.”

While Kaart argues that it ultimately depends on the work ethic of the individual, and not the institution – he also admits that IDEA’s boot-camp-like system certainly factors in tremendously. “The school definitely does hammer into you and that is a big aspect and that’s how it is in the industry.”

In just two summers, the VMF transformed Vancouver neighbourhoods with the collective work of some of the finest artists in the country. Calls for more room to help prosper public art has echoed all over the Lower Mainland for years and Capilano happens to be one of the best incubators of artistic talent in the province. So, it’s a wonder: must CapU buildings always be so spartan and stone grey? Vancouver has taken the step in decorating its walls with illustrations and designs that are both meaningful and consequential, who’s to say that a domino effect can’t lead to new colours adorning the CapU walls.