Capilano grad stars in Fringe musical about intimacy and relationships

Jayka Mayne knew that she would have to exhibit two qualities to find her place in the ultra competitive theatre industry: unrelenting hard work and an unyielding passion for the arts.

Her professors at Capilano University’s Musical Theatre Department emphasized as much. “From day one of the program they were like, ‘this is a hard career and you have to love it with all yourself or its not worth it,” she recalled.

A year after she finished her studies at CapU, Mayne’s hard work seems to finally be paying off. At this month’s Vancouver Fringe Festival, Mayne will share the spotlight as one of the stars of Sechs, an innovative musical about the varying beliefs, perceptions and principles that young people hold about intimacy and relationships.

Written by Devon Simmons MacKinlay, Sechs breaks mold from traditional performance-based media through its writing. The script not only eschews from deliberating character descriptors like age, gender and race, but it also completely abandons use of any gender specific and neutral pronouns. “Anyone can play those characters, it doesn’t matter, anyone can embody those characters,” said MacKinlay. By doing away with certain identifications, Sechs combats casting limitations and allows its actors to truly embody their respective roles. “I think it makes it really interesting to actors to get to play characters that wasn’t written with a really specific actor in mind,” said Mayne. “He [MacKinlay] really tried to not write anything that would pre-suppose how you’re playing the scene, it’s really just the text that you’re dealing with.”

Inspired by MacKinlay’s own experiences in Vancouver and Montreal, Sechs prides itself in honesty and realism. “The humour is so relatable, especially since most of the actors in the show are in their young 20’s,” said Mayne. “It’s a very honest show, it doesn’t hold up any illusions of what relationships should be like or the perfect idea of romance. It has a lot of humour but also a lot of very beautiful honesty.”

For Mayne, Sechs couldn’t have provided a better platform for her Fringe debut. The 22-year-old grew up in Vancouver with parents who all identify as part of the LGBTQ+ community, and performing at the Firehall Arts Centre has been a long-time dream of hers.

Premiering to a sold out crowd on Sept. 7, Sechs also marks milestones for its creators. While MacKinlay has had his fair share of theatrical credits, this is the first show that he gets to produce with long-time performance partner, Matisse Jacques Quaglia. The two grew up tap dancing together and have cultivated a chemistry evident in some of the shows they’ve choreographed. “This is the first time that we’re producing our own show,” MacKinlay said. “It’s my writing. Matisse is doing a lot of the set design, all the different technical aspects and he’s also helping me with directing.”

As Sechs prepares to steal the show at another exciting season of Fringe, Mayne recalls one of the finer lessons she learned at CapU: attention to detail. “Musical Theatre often is really about the details and our professors at Cap are really big on those,” she said. “Finding the really specific moments, whether its choreography or songs because they really believe that everything is put in a show for a reason”

On Sept. 7, when Sechs premieres to a sold out crowd at the Firehall, Mayne just might see her biggest moment yet. 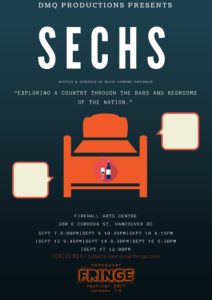 For tickets, head to VancouverFringe.com.