I’ve never been to Colorado, but if there’s ever a good enough reason to go I’ll be going to Denver. Out of all the conspiracy theories, the ones surrounding the Denver International Airport (DIA) are some of the most fascinating, not only because they’re creepy but because they’re so visible.

When DIA’s construction began in September 1989 there was already a fully functioning airport, the Stapleton International Airport, which sat just outside of downtown Denver. DIA is in the middle of nowhere, 40 kilometres outside of Denver and 30 kilometres farther from the city than Stapleton was. The size of the new airport is extraordinary – larger than the size of Manhattan at over 33,500 acres. It’s the largest airport in North America by total land area and, despite its size, it has fewer runways than the airport it replaced.

Construction was completed in 1995, 16 months behind schedule. This was apparently due to poor project planning and constant changes to the airport’s design. The final cost of the project was startling to many at US $4.8 billion (roughly $7,908,881,889.76 today), a whopping $2 billion over budget.

Several mysterious claims were made about the airport before it’s official opening on Feb. 28, 1995. Construction workers handling different parts of the project mentioned complex underground tunnels and buried buildings, officially extending an invite to the conspiracy theorists. Some believe that these underground areas are actually secret emergency bunkers, built for the protection of the “global elite” in the case of nuclear war or some other apocalyptic event. Others say that hidden below the surface lies a FEMA (Federal Emergency Management Agency) concentration camp, or a command centre for the New World Order (which, in a nutshell, is a conspiracy theory that claims that the world’s most powerful people are secretly conspiring to control us).

There are in fact five buildings beneath the airport. After being erected, all five of the buildings were deemed untenable and instead of being torn down or fixed they were buried. Weird, right? The labyrinth tunnels were built for an automated baggage system, one that never really took off and which was eventually completely abandoned Sept. 2005.

So, what about the stuff you can actually see?

Outside the airport stands the almost 10-metre-tall Blue Mustang. Nicknamed “Blucifer”. The horse’s bulging red veins and glowing red eyes are spooky as hell, and the statue has a surprisingly sinister past. During its creation, Blucifer fell on top of Luis Jiménez, the sculptor’s creator, and ultimately killed him after severing an artery in his leg. Some conspiracy theorists believe the mustang represents the Fourth Horseman of the Apocalypse, a chapter from the Book of Revelations that tells the story of an apocalypse and The Last Judgement. 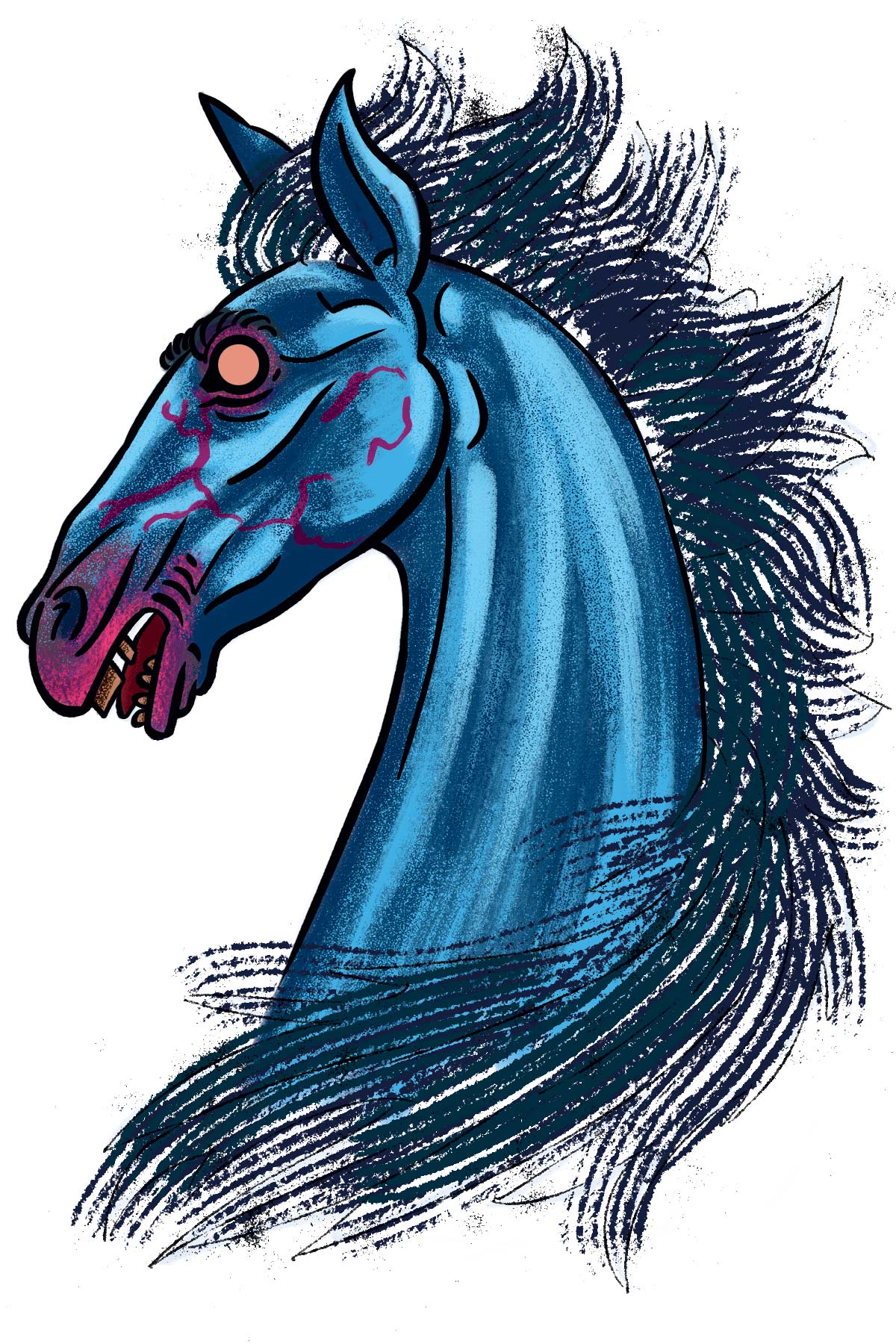 Inside the airport there are several more ominous and questionable decorative choices. Gargoyles sit watching the baggage claim area, nightmarish murals cover the walls and the airport’s dedication stone is stamped with way too many masonic symbols.

The dedication marker holds the seal of the Freemasons, a fraternal organization that dates as far back as the 1700s and is subject to its fair share of conspiracy theories. The marker is a time capsule to be opened in 2094, 100 years after the original completion date of the airport. Apart from being conjointly paid for by two Freemason grand lodges in Colorado, the marker is also dated Mar. 19, 1994. Why is that weird? When totaled, that number becomes 33, which happens to be the highest level one can reach within Freemasonry and is meant to represent perfection. Maybe this coincidence isn’t evil, but it is strange. The marker also reads “New World Airport Commission”, which is an organization that doesn’t exist and doesn’t do anything to help the “New World Order” rumors.

Probably the most well-known aspect of the DIA are the murals. Two of them titled “In Peace and Harmony with Nature” and “Children of the World Dream of Peace” being particularly infamous. Artist Leo Tanguma explained that the murals were meant to reflect environmental destruction and the hope for the end of societal violence, but take one look at these murals and you’ll probably think of something else. To many airport travellers, the images depict death, genocide, sadness and pain. They feature people crying, animals in glass boxes, fire, two small girls in caskets and, arguably the creepiest of all, a gas mask-clad soldier holding a machine gun in one hand and a sword stabbing a dove in the other. Is this weird to you yet?

Although the two murals are part of a larger four-part series, which altogether are meant to show the fall of humanity and its reconciliation, by themselves they present a much more hair-raising story that confuses everyone.

Earlier this year, DIA added a new character to its roster – Greg, the talking gargoyle. A spokesperson for the airport told 9News that they “pride themselves on being an airport where you never know what will happen”, which shows that instead of keeping her secrets hush hush, DIA is embracing its macabre reputation. In September 2018, posters appeared in the halls of the airport not-so-shyly poking fun at the conspiracies, or at least playing along with them. Covering areas under construction, the signs featured yellow hard hats adorned with Illuminati insignia and the words “Construction? Or cover up?”. Another poster showed a body with a reptile’s head that read “What are we doing?” with three choices presented below, one being “Remodelling the lizard people’s lair”.

We may never find out what truly lies beneath the Denver International Airport, or if there is a more meaningful connection between the airport and the Freemasons, but for now there’s enough information out there to keep us on our toes. Has DIA one-upped the conspiracy theorists by turning their skepticism into an ad campaign, or are they hiding in plain sight?