Full Throttle: Going against the grain as a female motorcyclist

As much as I love talking about motorcycles, when someone becomes the fifth person in a day to point out that I ride a motorcycle only to ask for my number, I already know they’re not the one. Don’t get me wrong, if you see me around campus and you’re genuinely interested in riding, do approach me – I just can’t guarantee that I’ll be able to fill the ultra sexy stereotype that a lot of people have in mind. Though feeling like a total badass has a lot to do with why many begin riding, personally, and as a female rider, the sport acts as a meditative outlet.

My secret long list of extreme and absurd goals was cultivated in the angsty, grunge days of Grade 11. The moment I turned 16, I was pressured into getting my driver’s license. Yet, the more I drove, the more I began to feel suffocated. From the inability to see everything around me, to the ideas that I’d be stuck in a pile up if an accident were to ever occur and to the notion that I had the power to take a life. Everything made me uneasy. Every bolt, sheet of metal and glass became a part of my body (no, not in a Transformers way) and I mentally evolved into bulk machinery.

My solution to getting over my fear of the road was to face it head-on, in a way that would be both cost effective and piss off my entire traditionally-minded family. Therefore, I set a goal to learn how to ride a motorcycle. I prepared myself for the road rash, road rage, costs and the comments. The moment I purchased my first helmet, I started receiving a hilarious amount of doubt from those around me. Unlike everything I’d purchased up to that point, the expensive piece of equipment was unreturnable. 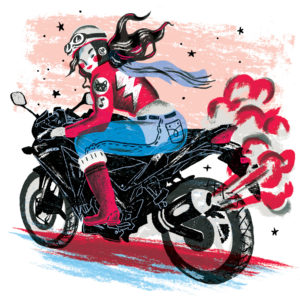 Even after I enrolled myself in a training course, my dad continued to question my bravery and determination with sarcastic comments regarding my future in the sport. There are a few stereotypes about women who ride, and while in my case, some of them are true, I’ve learned to deflect others’ opinions and assumptions of me. In this sport, females are typically the minority. Though there’s been a major shift in race, gender and age demographics, marketing strategies inside and outside the industry continue to utilize the hypersexualized perception of the female rider to sell whatever it is they need to.

Set Gear tailored for a “female fit” – which basically just signifies a smaller fit – comes in obnoxious pinks and purples, stamped with tacky and slightly generalizing nicknames and phrases regarding gender. In this case, we also see a lot less selection and worse, less protection. My abilities on a bike have been questioned in the past, regarding whether I’m capable of driving a “death machine” everyday. I can understand my loved ones’ concern for my safety, and while ripping down the freeway as a tiny dot next to industrial trucks sometimes physically drains me, you can bet I won’t lose sleep over it.

Growing up in a relatively conservative family, through which I’ve received endless comments about my lack of regard for a “feminine” attitude and appearance has given me a refreshing perspective. It’s intrigued me into doing more of what I want to do instead of what I am often told. While flat-out doing whatever you want to do isn’t the most conscious way to live, I think it’s important to challenge the odds in order to reach your highest potential.

The New Year not only brings a time for change in physical goals. It also brings along the perfect time to mentally revaluate what we’ve been told we’re suitable for and capable of achieving, and reflect on our overall attitude towards mindfulness. I’ve begun to make that change over the years with what others consider simply acts of rebellion — though I know, helmet on or off, that’s not the case. And the times where I’ve had to check my mirrors were the only times I’ve ever looked back.