Changing the narrative around muslim women

What does the world really want from Muslim women? Sometimes it’s hard to pinpoint.

In Western society, the hijab and women who wear it are constantly politicized. We’re expected to prove that we are are empowered and autonomous, yet scrutinized and questioned for doing so. We are always either too covered or not covered enough, too extreme or too progressive. But our existence shouldn’t be a perpetual source of controversy – we shouldn’t have to defend our every action, simply for being in the public eye.

Last year, Noor Tagouri, a young Muslim Libyan-American who pioneers as the first American hijabi news anchor, made world-wide headlines after appearing in Playboy magazine. Tagouri broke the Playboy stereotype by being covered hear-to-toe in accordance to the Islamic standard of modesty. Yet, rather than discussion about her work as a journalist and activist, she received a lot of public backlash and criticism, largely in the form of slutshaming and disapproval for her choice to work with Playboy. Was her intention of representing Muslim women in the media really worth the controversy?

I can disagree with Playboy magazine’s famous history of exploiting women’s bodies and question their attempt to rebrand themselves as an empowering force, but still respect Tagouri’s choice to use the platform to affect change. It was appalling to see the disrespectful responses and slutshaming that Tagouri received.

In pop culture, many hijabi women are trying to showcase themselves to the world in a way that’s different from how they’ve been portrayed. But in everyday life, the hijab is still far too often mistaken as an invitation for complete strangers to impose their ideas about your existence and lifestyle on you.

When people question constantly whether a hibaji woman’s parents (specifically, their fathers) forced them to wear the hijab, it can feel like there’s a “correct” answer that we have to give to pass a test. It’s no lie that most women who wear the hijab likely do so because they grew up in religious surroundings, but it seems people forget that the way anybody thinks, acts and presents themselves is naturally influenced by their parents’ upbringing.

I chose to wear the hijab myself, but it’s fair and logical to state that my choices are influenced by my parents’ teachings. Regardless, when hijabis are continually expected to defend themselves and their choice to wear it, it can feel like no answer is good enough. We shouldn’t have to strongly defend that it was our own choice to prove that we aren’t oppressed, just because it makes someone else more comfortable.

Last year, I collaborated with my school to participate in a “World Hijab Day” event on campus – a fairly liberal environment – to promote understanding about the tradition and facilitate cultural exchange. Yet the event received backlash when many students thought that it was to impose the idea of wearing a hijab. Others expressed that Westerners shouldn’t imitate other cultures’ traditions or participate in cultural appropriation (never mind what the student who actually wears a hijab thought). Ironically, the hijab is a practice that isn’t limited to any race or ethnicity – it can be practiced by anybody, anywhere around the world. Either way, the public perception couldn’t move beyond judgement and scrutiny.

I also recently began working at Victoria’s Secret. The typical response to this is people thinking that my goal is to make a political statement about their branding style, which some people may see as degrading towards women. In reality, just like many of my peers at this stage in life, I only wanted a job that pays well and a supportive environment.

When, as a society, will we be ready to shift the focus from the hijab to the actual person? Let’s stop asking women who wear the hijab to speak for all hijabi women – to explain themselves for simply existing. We can change the way we look at Muslim women and see them for who they really are – humans. 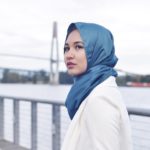