Capilano University hosted the 11th annual Creating Connections networking event on Nov. 14 at the Pipe Shop in North Vancouver. The event, hosted by the Faculty of Business and Professional Studies and the Career Development Centre, is held to encourage students and alumni to get to know local businesses and potentially create opportunities for future employment.

Originally, the event was open to third and fourth year Business students, this year being the first that it included the School of Communications and the School of Legal Studies. According to the website, “The event enables business leaders to meet with some of the best and brightest future graduates and an excellent opportunity for these students to interact with potential employers.”

This year’s industry attendees included the likes of BlueShore Financial (the primary sponsor), North Shore News, RBC Royal Bank and Freedom 55 Financial, among many others. Students, alumni and faculty of CapU attended. Paul Dangerfield, president of the University, spoke briefly, as well as the Dean of the Faculty of Business and Professional Studies, Dr. Halia Valladares, and Ms. Janet Burgess of BlueShore Financial.

This was the first year that the event was held at the Pipe Shop, as it had previously taken place at the Pinnacle Hotel. The location change was met with positivity. “The Pipe Shop is an awesome place for conventions, conferences, galas and dinners… It’s so open and it’s got a good view. It’s got a very casual kind of feel to it,” said Yats Palat, the MC for the evening and vice-president student life at the Capilano Students’ Union (CSU). 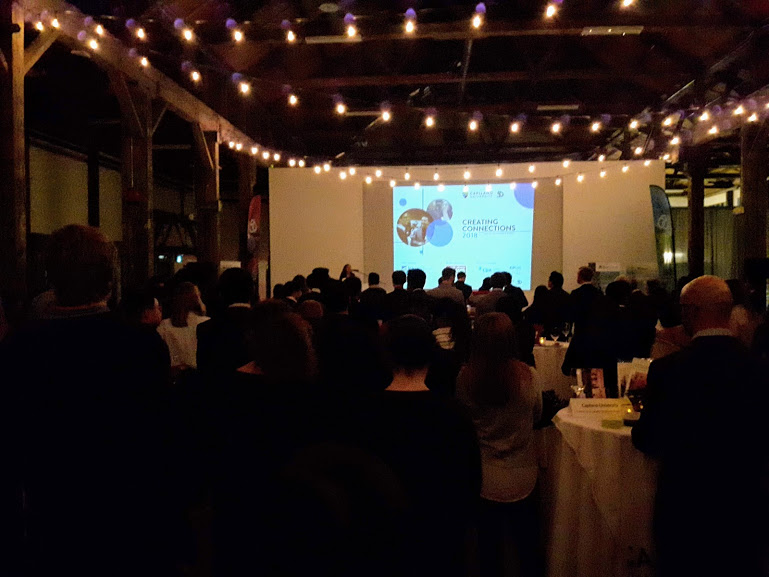 The Pipe Shop hosts many different events and boasts a beautiful view of the Quay and downtown Vancouver across the water. The event was catered, with charcuterie, crudite and seafood platters, as well as a delectable dessert tray. They also served beer and wine, with each attendee receiving a free drink voucher. “The event went well. The food was good, the drinks were decent,” said Palat.

The event had approximately 300 people registered to attend, according to Dominic Guieb, one of the Business students in charge of helping facilitate the event. “I think it went really well, I know they had a decent number of attendees. I know I heard from the Career Services… that they may have had less attendees than they had last time, but I know they were pretty happy with how it went. They had a lot of people from the industry, it was organized very well,” said Palat.

Aside from a hiccup with the speakers, where people were still networking and disrupting the program, one of the other concerns was that the industry attendees were mainly finance related. “It was really nice to network with these companies and get to know what they do, and a lot of these companies do a lot more than just banking, like BlueShore, they do their marketing and whatnot, but their ideology is finance driven. That’s one thing I would’ve liked to change,” said Palat, noting that a lot of Business students aren’t just interested in finance.

The event encouraged networking, and positive connections were made for those eager enough. Creating Connections is a good opportunity for students, alumni and industry professionals alike, and will return next year in case you missed it.