Shelley Ferguson, a second-year Psychology student from the Qayqayt First Nation, sets an assortment of crafts onto a sofa. A handful of people work on their beaded creations while another student plays Brazilian guitar. Ferguson’s beaded Wonder Woman tie swings as she points to the Vancouver Canucks logo she made earlier. “There was at least a year or two where all I made were these different Canucks logos ‘cause that’s all anybody ever wanted. And now I’m just like, ‘I’m done.’” The crafts include iconic cartoon and comic book characters like Bugs Bunny, Goofy, Harley Quinn and Jessica Rabbit beaded into bracelets.

Ferguson is facilitating Beading with Shelley, a series of beading workshops held every Friday until Nov. 23 in Capilano University’s Kéxwusm-áyakn Student Centre. The series is part of the Centre’s goal to hold regular cultural workshops for students, faculty and the general public to attend. Though this is her first time as a facilitator, Ferguson has been perfecting her loom and embroidery beading skills for the last 15 years. “I think the beading process is very therapeutic once it gets going,” said the student playing Brazilian guitar. The repetitive, detailed work is a practical way to de-stress for many, including Ferguson when she was a stay-at-home mother. 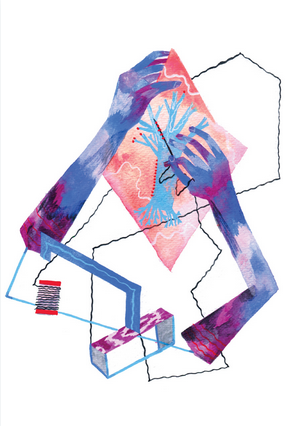 Beading has allowed Ferguson to strengthen the connection to her Indigenous heritage. “My grandmother had went to residential school. When she came out, she was ashamed of being First Nations. She didn’t tell us about beading – about anything.” Everything Ferguson has learned about the craft has come from trial and error and the internet. Currently, Ferguson is taking a First Nations of BC course to study Indigenous aesthetics. “My mother was 24 when she found out that she was half Native. We didn’t grow up with any of that culture,” she said.

As Ferguson learns more about traditional beading styles and techniques, she continues to make intricate patterns onto anything she can. Over the years, she’s beaded John Lennon’s face onto a bracelet, a Game of Thrones-inspired hair clip shaped as a dragon and even a pair of Star Wars shoes for her sister, complete with Darth Vader and the Death Star. Ferguson’s patterns may be complex, but “it’s actually really simple,” she explained. “You’re just going around and around and around, picking up different coloured beads.” All a beader needs to do is choose an image, trace it, and start.

If you’d like to attend a Beading with Shelley session, contact Joel Cardinal at joelcardinal@capilanou.ca to sign up. No previous experience is required, and everyone is welcome.