Five women sit in a half-circle in the Mexican village of Tapalpa. They are connected by an ever-expanding cloth of bleached cotton muslin. Each of them holds an embroidery tambourine, their hands threading in and out of the cloth, as they embroider their enlarged fingerprints in black thread. They do this as an act of protest. The disappearance and murders of Mexican women, women who come from villages and work in factories just like them, has become an epidemic. Viewing the photograph of these women embroidering their fingerprints in a half-circle, the underlying darkness of this imagery becomes apparent – there is a very real possibility that they could someday disappear too.

The women are part of a larger project organized by artist Deborah Koenker, where 84 villagers from Tapalpa, Jalisco hand-embroidered their own fingerprints. The project was later hung in an installation, along with the names and photographs of disappeared and murdered victims. Koenker wants to bring awareness to the precariousness facing Mexican women working in textile maquilas – American-run companies in Mexico that import, manufacture and export goods duty-free, taking advantage of cheap labour. The hand-embroidered fingerprints refer to the lack of criminal investigation in the missing and murdered cases of the maquila workers, and present a sharp contrast between the individualized hand of the maker and the anonymity of factory work. “They had to sit in groups to do this embroidery because it was two long pieces of cloth, and it gave them the opportunity to talk about violence in their own community, because it exists in every community, everywhere. It’s just often not talked about because it’s considered a shameful thing. In Mexico, given the history of colonization, you don’t complain. You just ‘put-up and shut-up’,” said Koenker during her Artist’s Talk at Capilano University.

In her most recent project, Grapes and Tortillas (2016), Koenker photographed 160 seasonal Mexican workers in the Okanagan. The Seasonal Agricultural Workers Program (SAWP) is a program run by the Canadian government that allows Canadian farm employers to hire foreign workers from Mexico and the Caribbean to fulfill labour demands. SAWP brings over 2,000 Mexicans each year to the Okanagan, where they work in vineyards and fruit harvesting, among other things. Koenker gave her subjects a flattened tortilla and asked them to write their name on it, where they come from, and one thing they would like to say to the people viewing her work.

Parachuted into a different culture, the migrant labourers work 12-15 hour shifts six-to-seven days a week, with no overtime pay. One contract Koenker examined entitled the worker to two unpaid, 10-minute breaks in one shift.  The migrant labourers work for up to eight months, separated from their families – missing births, quinceañeras and marriages, isolated in an unfamiliar town where they are pushed to work past the point of exhaustion. One worker writes on his tortilla, “We hope that one day, we will be recognized as good workers, and more importantly, as people, people who are undertaking the cumbersome, tiring work of this country.”

The workers are paid either minimum wage (currently $12.65 an hour), or if they are harvesting particular crops, are paid by piece rate (the rate for blueberries as of September 2017 is $0.483 per pound gathered). Income tax, Canadian Pension Plan (CPP) and Employment Insurance are deducted from their wages. “They cannot collect [employment insurance] because they’re contract workers, and when their contract is up, they’re required to leave Canada. So they pay into this plan that they can never collect from,” says Koenker. “The thing about CPP is, if you’re uneducated and you’re living in a foreign country, and you get paperwork, if you even can access the paperwork in Canada, it’s going to be in English. Most of them won’t ever collect their pension plan. So our government’s keeping a lot of money from them.”

Another worker writes, “We aren’t rapists or robbers, as Trump says. We are workers.” Yet another writes, “I would like to work without worry and be able to bring my family here. My wish is to have a better salary and better work opportunities.” Many of the messages plead with the Canadian government to allow the workers and their families to immigrate. Koenker notes that workers could be coming to work in Canada consecutively for years, and still have no path to becoming Canadian residents. 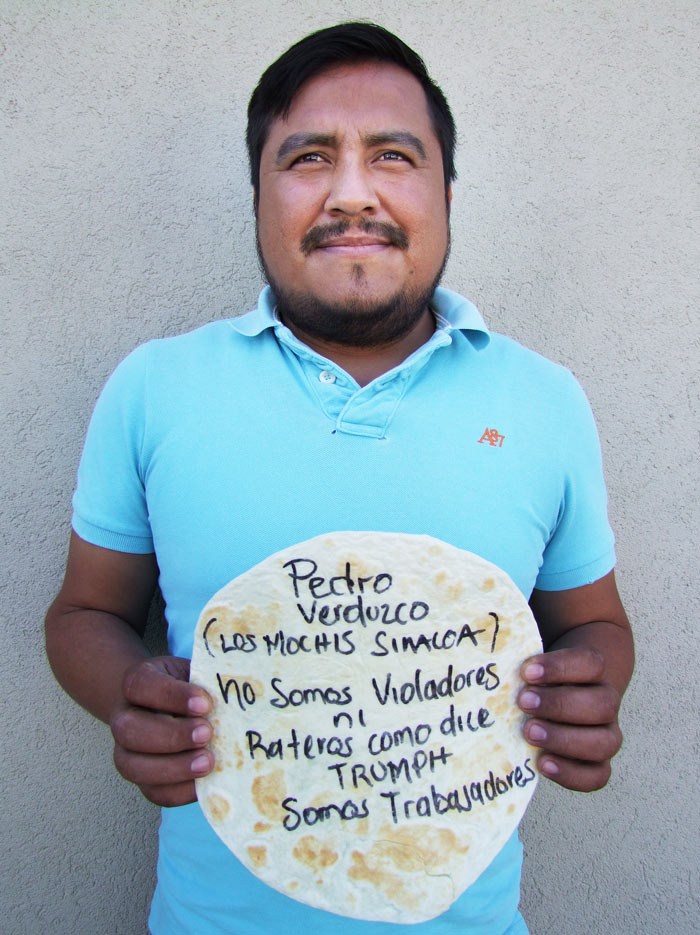 Despite the few dissenters, the overwhelming majority of workers express some kind of gratitude towards Canada on their tortillas, while revealing their intense frustrations in private conversations with Koenker. The hardship experienced by these workers is evident in their photographic depictions, their wary eyes and half smiles reveal a more complicated truth than the messages of thankfulness written on their tortillas. “They’re under the gun in terms of being able to come back and work every year. If they complain – like if they’re abused by an employer – they often won’t say anything.”