IDEA students, among other talented artists, spruce up the North Vancouver campus with nine new murals

Usually meticulously dressed, Cristian Fowlie is a sight in a pair of paint-splattered navy jeans and a safety harness. He’s leaning over the side of the lift in the loading zone between Birch and Arbutus, casually painting long blue brush strokes to define the hairline of a figure. The heavy traffic along Greg Lee Way doesn’t distract him. He is in his element. Below, three first year Illustration and Design (IDEA) students roll blue, red and yellow paint over the blank spots on the wall.

“I actually just met him,” one of the students at ground level laughs when asked if Fowlie is a good mentor. The artist himself takes a break from his work and comes down to the parking lot, occasionally glancing up at the clouds. It’s supposed to rain, and he worries the sky will open before his paint dries.

Fowlie is one of 14 artists painting one of nine murals on CapU’s North Vancouver campus to celebrate the University’s 50 year anniversary. Several of the artists are working in teams, but Fowlie braved his piece solo despite his inexperience with murals, and put out a call for help painting the massive piece on his Instagram well into the process. Last year, he painted a wall in a Mount Pleasant neighbourhood for Vancouver Mural Fest.

“This mural was inspired by a sketch that I did when I was a student in 2013,” said Fowlie, who grew up in Burlington, Ontario before coming to study at CapU, where he graduated from IDEA in 2015. The four geometric figures, inspired by people Fowlie went to school with or saw around him, pop out of his sketchbook in bright colours now being splashed on the primed concrete walls. The University, he said, liked this particular submission because the colourful figures showed the diversity of the CapU community.

Fowlie needed to project the original image onto the wall to preserve its proportions. “I can draw a face easily when it’s in my sketchbook but when it’s 10 feet tall it’s easy to lose the sense of proportion and if something is off people can see it.” The work is also very physically demanding, painting al fresco requires him to be on his feet for seven to eight hours at a time. 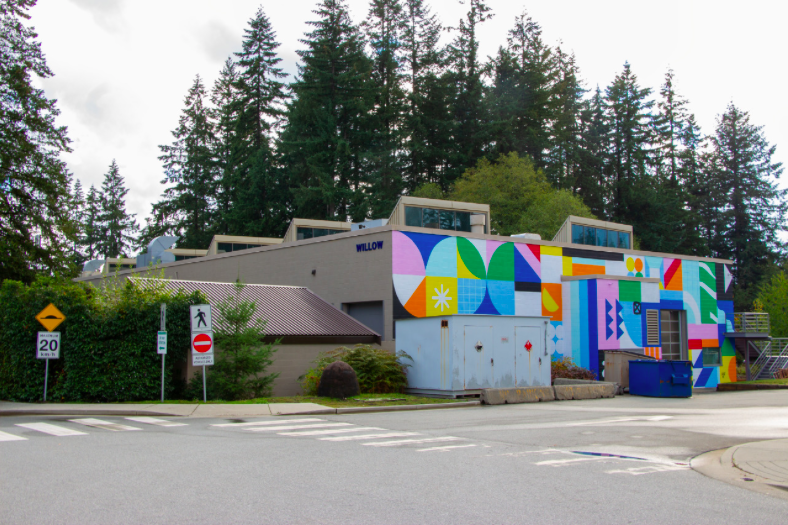 With $100,000 in anonymous donor funds, CapU partnered with Vancouver Mural Fest in June to recruit artists and make the campus more vibrant and colourful. The chosen artists began painting in August, and the nine murals at the North Vancouver campus were unveiled at CapFest – the University’s 50 year celebration on Sept. 22.

IDEA talent includes Brynn Staples, Emily Huynh and Courtney Lamb along with graduate Tierney Milne. Veteran Drew Young, who has more than 30 murals to his name, was also commissioned to bring the walls to life across campus from the former Studio Arts building at the north end to the concrete façade of the Birch building.

“From what I understand IDEA has a lot of great ties with things like Mural Fest and whatnot, and I’ve always wanted to learn how to paint a mural so getting into something like this today was a huge opportunity as a learning experience,” said John Pachkowsky, one of the first year students rolling paint on the lower section of the wall. 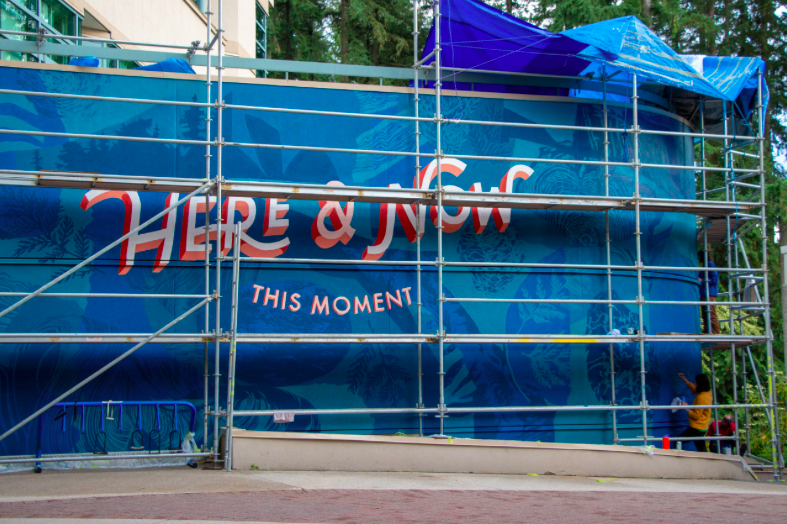 The three students happily return to painting and Fowlie climbs back into the lift, determined to pain as much as he can before the dark clouds overhead begin to pose a real hazard. Fowlie’s work is now complete, but CapU moves ahead with its murals, having procured an artist just last week to add a mural to the k̲álax̲-ay Sunshine Coast campus.