The best moments of the 2017-18 Capilano University Blues Season

If last year’s collective Pacific Western Athletic Association (PACWEST) season marked the “turnaround” phase for the entire Capilano University Blues program, then this year was about maintaining that success. As the 2017- 18 season closes, we look back at some of the year’s most memorable moments.

Best in the Country

After just three seasons in the PACWEST, Blues men’s volleyball captain Simon Friesen has already established himself as the best player in the entire conference and beyond. This season saw the captain win both the PACWEST and Canadian Collegiate Athletic Association (CCAA) Player of the Year awards, cementing his position as one of the eminent volleyball stars in the country in just his third year of collegiate play.

Friesen was second in the league in assists, but brought far more to the team than statistics. His Volleyball IQ and instincts were obvious throughout the season and his ability to make his teammates better elevated the entire squad’s play. With two years of eligibility left, the best is yet to come for the CCAA’s best volleyball player.

Men’s basketball head coach Cassidy Kannemeyer had multiple plays planned on Friday, Jan. 12 – one of them was life-changing. Before the game tipped off, Kannemeyer took a very special moment to propose to BC MLA and Minister of Advanced Education Melanie Mark.

Few in the audience even knew the two were a couple making the event that much more exciting and electric. The only unfortunate part of the evening was that the Blues ended up losing their game to Vancouver Island University Mariners after the proposal, but the overall evening was a win for everyone.

After two straight PACWEST silver medals and three in the past five years, the Blues women’s basketball team finally secured PACWEST supremacy with the 2018 provincial gold. After making some strong moves in the off season, the team came into this year’s campaign tooled for success. Finishing the regular season in second place, the team won a thrilling semi-final game and played their best game of the season in the finals against the Camosun Chargers, securing their ticket to the CCAA national tournament.

Although any championship is exciting, this one was almost a relief. Over the past few years the team had made it clear that they were a PACWEST powerhouse, but had never been able to finish in the finals until this year. The win was just as much a relief as anything else and was the perfect way to finish what will be looked back on as a Blues reign. 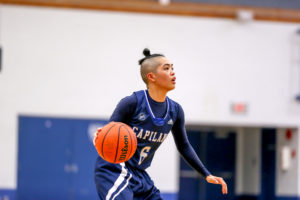 Ashley dela Cruz Yip cemented herself as a PACWEST legend in her final year by breaking the league’s all-time assist record. She finished with 389 career assists in 94 games. That’s 72 ahead of the next closest, despite her having played four games fewer. Dela Cruz Yip’s final season was successful in almost every measurable way. She was named to the PACWEST First Team All- Star, CCAA Second Team All-Star team and with a gold medal around her neck.

Although she’ll most likely be remembered for her assists more than anything else, dela Cruz Yip finished her time as a Blues athlete with a well-rounded game. She placed 12th in the league in scoring and steals in her final year, and had an ability to come out of any crowd with a rebound, making her one of the most versatile players on the court at any given time. 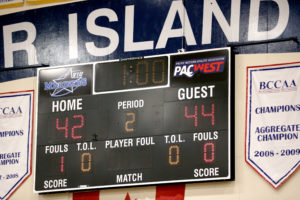 As if their season wasn’t already exciting enough, on Nov. 3, the Blues Men’s Volleyball team were a part of a record breaking game. The Blues and the Vancouver Island University Mariners battled in a history-making second set, running up an unprecedented 44-42 set score – which the Blues won. The 86-point set ranks as one of the longest in recorded volleyball history, and is certainly one of the highest scoring sets in Canadian volleyball.

If that wasn’t uncanny enough, the Blues won the third set of their Feb. 16 match against the Douglas Royals 43-41, nearly breaking their own record. 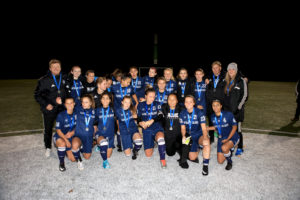 Coming into the 2017 soccer season, no one knew what to expect from the Blues women’s soccer team. With eight rookies, a handful of second and third-years and a single fourth-year player, the season seemed as though it could go in any direction. After starting the season with mostly draws, the team continued to leave fans wondering where the season would end up. However, as the team developed chemistry towards the end of the season and found their stride, it was clear that what they lacked in experience, they made up for with skill and heart.

By the time the PACWEST playoffs came about in late October the women were a clear contender and didn’t fold, making it to the gold medal game. Unfortunately, as with so many of their games throughout the season once regular time and added times were complete, the game was tied and went to a shootout where the Blues fell to the Douglas College Royals. Although the season ended with a bittersweet silver.

Despite a massive turnover in their roster, the Blues men’s soccer team showed that the team’s culture could withstand even the biggest of changes. This year, the back-to-back provincial gold medalists came in with 13 rookies, most of whom were immediately tasked with the responsibility of contributing on the field. Though the Blues fell short of an ultra-rare provincial three-peat, their bronze medal finish show that despite their overwhelming youth, a winning culture still exists.