With its first semester in the books, CapU Residence looks to build off its initial struggles and continue building a community

When Capilano University announced its first ever student residence early this past summer, the only thing more surprising than the news itself was that “CapU Residence”, located off-campus on 2420 Dollarton Highway, would be ready to welcome students by fall.

With its inaugural semester now complete, it seems like that quick three- month turnaround from announcement to launch was more than just an impressive and difficult feat – it was also foreshadowing of how CapU Residence might struggle and of its prosperity.

Though the establishment of student housing for CapU was a success in itself, there were bound to be growing pains that would come with its launch. For Chad Johnstone, student affairs officer, some of those shortcomings can be chalked up as inevitable aspects of a trial run. And in the grand scheme of things, CapU Residence has admirably addressed one of the chief concerns of CapU students – community. “I think we have a unique opportunity to sort of create something from scratch,” said Johnstone, “And the students have been a huge, huge part of that. They’re the backbone of the community here.” 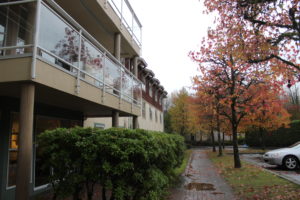 One of the biggest challenges with CapU Residence was established early. Johnstone alongside Residence Life Facilitator, Bailey Kew, and the rest of the Residence Life team had limited time to prepare the residence for its fall semester launch, thus delaying some important elements, which were intended to be initiated early on. “I think this term has been obviously one of building,” Johnstone said. “We had three months to get everything ready in the summer, so there are obviously some projects that have trickled in this term.”

These projects include improvements to key social spaces such as lounges and the dining hall. New seating was recently introduced, and more furniture is slated to arrive this December, but one of the biggest delays has been the installation of a 50- inch Smart TV in each of the lounges.

Through his own independent operation, Andrew Willis uncovered some residential shortcomings that students have complained about. Late in October, the Capilano Students’ Union (CSU) Vice President Academic spent some time on site to survey and speak with the students living on-residence. “They’re a little bit disappointed that they’re coming in and the lounges don’t have very warm, happy, friendly, comfortable furniture,” he said. Apart from an already established community feel, Willis is concerned that the students’ living environment doesn’t translate the same way. “They’re kind of dissatisfied that they don’t have games to play with them – there’s no board games. They don’t have ways to really personalize it and make it a home.”

Although Willis did learn of issues he deemed to be concerning, one of his more telling findings was about his own work. Willis admitted to having been disappointed about the lack of effort and work he has been doing for the students at CapU Residence. “I was disappointed on how I did,” he said. “I’m a very critical person, I’m not afraid to work. I’m not afraid to go the extreme, so I was just really frustrated – I just feel like we need to listen to students more.”

In conversation with many students, Willis felt that the CSU members, especially himself, need to be doing more in terms of reflecting the needs and wants of the students living in residence. He found that students were actively looking for more events, as well as ways to be engaged and entertained in the premises of CapU Residence.

One of the ways Willis intends to improve CSU-presence on Dollarton is through the Residence Relationship Committee, a branch of the CSU that is slated to be properly launched this January. The Committee will include four CSU members, including Willis who intends to run for chair, as well as three student residents. On top of the committee, Willis has earmarked the remaining $10,108 from the CSU’s residence budget to be put towards improving amenities, particularly ones that would enhance student experience within residence. “We need to get them projectors, we need to get them game stations, Xbox, PlayStation and board games,” he said, “We have to support them and create events for them.”

Moving forward, Willis is aiming to better integrate CSU projects for the residence, something he hopes will foster a better and more engaging relationship between the residents and the student executives. He is not only planning a more concrete schedule of events next semester, but also the increased presence of CSU board members on site. Hoping to be as immersive as possible, Willis has come up with a radical plan that could help bolster the CSU’s presence at CapU Residence.

“I want to have a sleepover down at that residence,” he said. “I want to get our board members the hell out of our offices and in with those students, so we’re going to do a sleepover if I can coordinate that.”

As for amenities, Willis is focusing on ways for students to better personalize their experience. He’s planning on organizing a book drive to fill the shelves in the study areas and is adamant on improving the lounges. “I want to make sure that we purchase and get some games, so we can make sure that the area above the cafeteria is being utilized.” 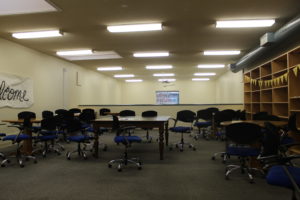 Despite the fact the dining hall area is now available to students from 7 a.m. to midnight, questions about convenience remain when it comes to meals. The cafeteria offers three main meal periods: breakfast from 7 a.m. to 10:30 a.m., lunch from 11 a.m. to 2:30 p.m. and dinner from 4 p.m. to 7:30 p.m. On weekends, food service follows a slightly altered schedule, opening at 10 a.m. and offering brunch until 2:30 p.m. with dinner still offered during its regular hours. Although the cafeteria’s morning and lunch service seem to fit well with student schedules, the 7:30 p.m. closing time does not help students with classes that extend past 9 p.m. The issue, which Johnstone said has been brought up several times, is particularly pressing with CapU Residence, as Johnstone estimated that about a third of their population comes from the night class-heavy fine arts programs, namely Motion Picture Arts (MOPA).

Although concerns regarding the service hours have been brought up, Johnstone said that students have generally been able to get back to the residence in time for dinner service. If that’s not the case, then students are also able to use a $500 dining card on campus that was implemented as part of their $2,130 meal plan. “We knew that because of the location of the residence, students wouldn’t necessarily be able to eat all their meals in the dining hall here, so we included a $500 dining card in that so that students could eat on campus,” Johnstone said. 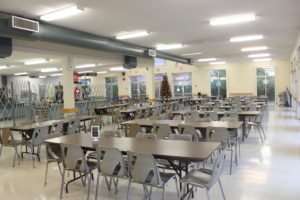 Due to the residence cafeteria’s “All You Care to Eat” system, students are forbidden from taking food out of the dining hall. This rule is not designed to keep students from accessing food, but rather works to prevent unnecessary food waste and ultimately keeps the price point for the meal plan down. “There’s other advantages to it as well,” said Johnstone. “The dining hall tends to be a pretty social space. That’s where students from all of our buildings come together when they have meals, so I think that’s where a lot of our friendships are formed,” adding, “I think students now see the value in eating their meals in the cafeteria.”

As straightforward as it may seem, this particular nuance has actually become a point of confusion and miscommunication for some students, namely Hriday Jotsinghani.

In the past few weeks, news spread around the residence that the first year Digital Visual Effects student had been reprimanded for taking food out of the dining hall. There were rumours that Jotsinghani had taken a bagel or two, or a muffin, some people even suggested that he took several pizzas.

“The unique experience that I had, it was actually just a miscommunication gaffe, a huge one that should not have been there,” Jotsinghani explained. “The first thing I did wrong was I took a couple of pizza pretzels, actually, like six or seven of them.”

Jotsinghani and some friends were headed to watch the movie Mother when he had decided to take several pizza pretzels for his friends, not knowing it was against the rules. A server who had seen him take the pretzels told him that what he was doing was prohibited, and after their quick talk, he apologized and left. Later on, Jotsinghani fell into a heated discussion about the movie. “I was speaking in my native language, Hindi, and I was speaking with a friend who was a fellow filmmaker,” he said. Jotsinghani recalled saying, “Michelle Pfeiffer’s a bitch!” multiple times, and much to misfortune, the server overheard him and misinterpreted that he was referring to her. “That’s where it started from,” he said.

Feeling the tension, Jotsinghani wrote a letter to the staff member apologizing for the miscommunication, explaining in his own words what had happened. “After all, it’s our home away from home, it’s like a family,” he said. “And especially my momma didn’t raise me this way.”

Continuing his unlucky streak, Jotsinghani, as well as a couple other students, fell victim to the crimes of a bike thief. According to Jotsinghani, 10 bicycles at CapU Residence were locked outside, and one early morning, the security guard saw CCTV footage of an elderly woman stealing bicycles. “Somehow she managed to take two bikes, and my seat was a bit wobbly, so she managed to take it,” he said.

Currently, there are just over a hundred students living at CapU Residence. With Seymour Hall and an entire floor in Cypress Hall almost ready to open, the possibility of the residence reaching its capacity of 293 within the next couple of semesters is high. “I think that the fact that we managed to get this ready for students in a three month period is a point that the institution should be very proud of,” said Johnstone. “I think we really did this so quickly to meet a need and as a result, we’ve got a really fantastic culture here and I think that’s something to be proud of.”

While the basic foundations of a community have already been somewhat established, those who reside on Dollarton continue to grow a residence culture unique to CapU. With a little more time, the CapU Residence could soon truly be a home away from home.