“Improvement” was a resonant theme with the entire Capilano Blues department this past athletic calendar. Across the board, the Blues varsity teams collectively made huge strides, culminating in the best improvement in aggregate points from the previous year.

For their accomplishments, the Pacific Western Athletic Association (PACWEST) awarded the Capilano Blues with the prestigious Founder’s Cup, a merit reserved for the athletic program that demonstrates the best overall improvement across all teams.

The Founder’s Cup bookends what has been a successful 2016-2017 season for the Capilano Blues. The Athletic Department saw five provincial medals and a national bronze medal, after the Blues men’s soccer team took home the Canadian Collegiate Athletic Association (CCAA) bronze medal.

Here are some of the highlights of this season’s Blues: 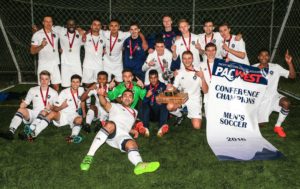 The Blues had the target on their backs. After winning the provincial gold medal and the national silver medal in 2015, the Capilano Blues men’s soccer team entered the season with a mission: get out of the gates fast. Behind the leadership of their fifth-year captain Devan Woolley, the Blues not only got off to a hot start, they finished the year undefeated.

The team simply dominated the PACWEST; forwards Kristian Yli-Hietanan and Keith Jackson led the conference’s most electrifying attack, while the midfield trio of Edris Najm, David Genet and Kuroush Faritous confounded opposing defences with their precision and chemistry. On the other end of the field, they suffocated teams. Woolley led a stifling defensive line that terrorized the rest of the conference and goalkeeper Hudson Nelles led the league in shutouts.

The Blues wound up winning their second straight provincial gold medal but fell short of the national gold, claiming the bronze medal in Fort McMurray. With Woolley finishing eligibility, the Blues now look to their youthful core to continue their recent string of success. Look for Jackson or Nicolas Morello to take up the armband, and the midfield trio to continue their rise as the best in the province. 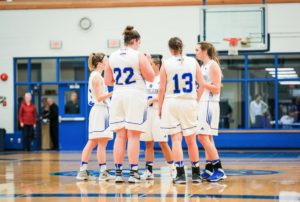 The Best Defence in the Country

in the PACWEST. The team won the provincial silver medal last season, and with much of their core players returning, they knew they had a legitimate shot at the gold. To do that, they knew they had to be a dominant defensive unit. The Blues had an impressive mix of talent. Forwards Carmelle M’Bikata and Karyn Nelson controlled the paint and the boards, shooters Sherrie Errico and Brittany Wertman led the attack from the outside and guards Reiko Ohama and Ashley Dela Cruz Yip engineered the defensive identity that the Blues lived by.

Look for M’Bikata, Dela Cruz Yip and Errico to vie for the title of “best trio in the league” next season. The Blues may have ultimately fallen short of the gold, but with much of their core group looking to return, expect the Blues to remain in contention for the PACWEST in 2017-18. 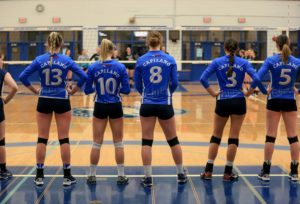 End of an Era

Sarah Hughes, Kira Sutcliffe, Kolby Richter and Kelsi Boroevich had one last opportunity. After years of falling short of the provincial gold, the four fifth-year seniors who have helped build a culture of winning and family for the Blues women’s volleyball team had one last shot at the promised land. With a host of talented young players like Tyneille Neufeld, Anika Kolybaba and Meghan Koven, the Blues’ chances at the elusive gold were seemingly at their best this season – yet, it just wasn’t in the cards.

The Blues wound up with their third straight provincial bronze, continuing their four-year run of medalling in the championship round (silver in 2013-2014). Though the four departing seniors leave on a bittersweet note, the culture and foundation they’ve built with the program stand as legacy that should last for years to come. As the seniors bid their goodbyes, expect the likes of Neufeld, Danae Shephard and Abigail O’Neil to take on the mantle of leadership.

After nearly five years of losing, the Capilano Blues women’s soccer team roared back to relevancy with a bronze medal finish at the 2016 provincial championship. Led by the impressive scoring abilities of second year forward Taylor Einhorn, the Blues were able to mitigate the perils of youth and inexperience with hard work and dedication to defence.

Team captain Jessica Price routinely proved to be a rock on the defensive end, while rookie mid elders Arin McIldoon and Mehar Waraich impressed in their inaugural seasons. Also notable were second-years Juliana Mannella, Shaelie Bramley and Natalie Leclerc, who provided the much- needed consistency for a youthful group. Their promising season yielded welcome results, and with time very much on their side, the Blues could soon be a serious threat in the PACWEST. 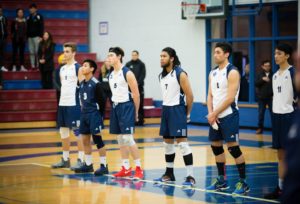 Could a super-team be brewing at Capilano?

When he took over the head coaching position of the men’s volleyball team, Emmanuel Denguessi was adamant that his primary goal was to build a culture of professionalism both on and off the court. Two years later, the seeds that Denguessi planted are starting to blossom. Co-captains John Dela Cruz and Simon Friesen helped spearhead the young roster to several thrilling come-from-behind victories.

Justin Yee and Jonathan Lee shone in their rookie seasons, showing a glimpse of the Blues’ exciting potential for years to come. Second-year outside hitter Sameh Khodr joined the team in the new year, but quickly became another devastating weapon for the Blues. With a team primarily composed of rookies, second and third-year players. The duo of Yee and Lee have established themselves as potential star players in this league.

Complemented by the steady and productive co-captains, the Blues should make some noise next season – with their talent and unity, a shot at the provincial title shouldn’t be too far-fetched. 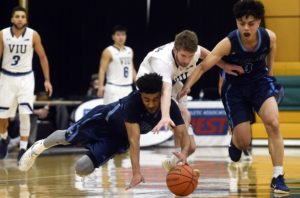 A terrific start to the season had the Blues men’s basketball team atop the PACWEST, but issues with injuries, eligibility and an imbalanced road schedule ultimately had the team stumbling in the second half of the season. After an impressive 8-1 start, the Blues fell into a funk and lost seven of their last nine games.

With much of the early-season excitement seemingly fading, the Blues managed to pick themselves back up in time for the playoffs and go toe-to-toe with the vaunted Vancouver Island University Mariners team in the gold medal match, where they ultimately claimed the silver medal. Forward Greet Gill and rookie point guard Wowie Untalan led the way for the Blues, while guards EJ Mabone and Hassan Phills set a defensive identity that proved to be indispensable in the playoffs. Expect Untalan to take another step forward next season, and for young guards Malik Holmes and Alec Bayne to be key factors for their next run. 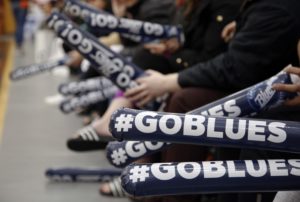